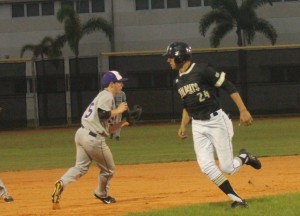 Western’s David Flores advances to third base on an infield groundout in the fourth.

A tight district contest between rivals South Plantation and Western came down to which club was able to manufacture runs on Thursday. Facing off in the HSBN Broward Game of the Week, the host Wildcats strung several productive at bats together to produce enough runs to prevail with a 5-2 district victory. Western collected 13 hits in all, and the batters were successful in stringing them together better than at any other point all season.

The Wildcats picked up an important victory in 8A-12, improving their record to 4-2 in the district. The win keeps them in contention for a top seed in the district, as well as building up some much-needed momentum moving forward.

“Every district game is big and these guys have given us a lot of trouble in the past, so it’s always nice to get a win,” Western Manager Paul Barnes said. “Especially when we stranded as many runners as we did, it is more of a relief than anything else. We had a big week with three wins this week, and we just have to build the momentum and take it in to face Cooper City after Spring Break.”

Shortstop Anthony Urso played a big part in the results, going 3-for-3 while setting a nice example by using both sides of the field. The senior veteran helped spark a three-run fourth inning with a leadoff single, then scoring on an RBI from David Flores to break a 1-1 tie and put Western (8-4) ahead for good.

“We’re just trying to get the most hits we can right now,” Anthony Urso said. “The last few games we only had a few hits, but this game we did good and got 13 hits, and it felt good.”

Anthony singled through the left side to start off the fourth, and moved to second thanks to a solid sacrifice bunt from his young brother, Zach Urso. Weylin Cleri followed with a double to center field, with Anthony being held at third base on the play. Brannigan Hart then walked to load the bases, and Flores put the ball on the ground for an RBI groundout that erased Hart at second while Anthony easily scored. 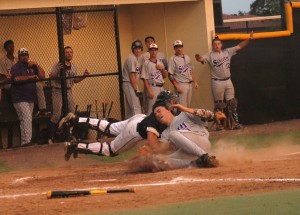 South Plantation’s Ernie Osteen scores on a close play at the plate to put the Paladins up 1-0 in the third inning.

The Wildcats did an excellent job of hitting behind runners, producing quality at bats and stringing the offense together. The hitters were productive in putting the ball in play and doing what needed to be done to move guys along.

“This is the first game where we really manufactured runs to success,” Barnes said. “Every other time we have manufactured one or two, but it’s come down to getting one big hit. There has just been no real consistent offensive success, and this was our first successful offensive game. We needed it; we are going into a slow period for us because we only have two games the next two weeks.”

While the positive momentum is exactly what the Wildcats needed, across the diamond the Paladins (3-6) are left searching for answers to turn around their recent struggles. South Plantation dropped to 0-5 in the district and faces a tough climb to get into the district tournament.

“The biggest disappointment is in the number of hits. We were out-hit 14-5, and that’s the telling part of the game in a three-run ball game,” Paladins Manager Ryan Manuell said. “We’re not putting the ball in play. We had a lot of strikeouts and a lot of pop outs, and you can’t be successful and score runs like that. You can’t get base runners like that, and without base runners it is hard to do anything. You can’t hit-and-run, you can’t steal and you can’t bunt without anybody on base. It is frustrating when you can’t find a way to produce runs because you can’t get anybody on base.”

The biggest positive for the Paladins came in the fight and grit they exhibited. The team battled to the very end, bringing the tying run into the on-deck circle in the top of the seventh after Andy Huegele singled and scored on an RBI single from Steven Seager.

The visitors also jumped ahead 1-0 in the third thanks to an RBI single up the middle from Huegele that drove in Ernie Osteen. As often is the case in baseball, Osteen carried a big play in the field into positive production at the plate. The center fielder kept the Wildcats off the scoreboard in the second when he tracked down a fly ball with one out and a runner on third, then fired home to catcher Aaron Sigal in time to catch the runner trying to tag up and score. Osteen came up second in the next half-frame, drew a walk and then stole second base to get into scoring position for Huegele. 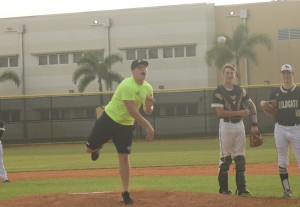 Mr. Western Griffin Norberg throws a perfect strike on the ceremonial first pitch to kick off the Game of the Week.

The bulk of the night belonged to the Wildcats though. Flores singled to lead off the bottom half of the third, stole second and advanced to third when George Helbig got the ball on the ground to the right side for a 4-3 ground out. Anthony Gutierrez then evened the score by smacking the first pitch he saw deep to center field for an RBI double.

Flores had a nice day overall, going 3-for-4 with two RBIs and a run. After the game he spoke about how crucial it was that everybody in the lineup was able to contribute to the victory.

“It really helps, because when the game is moving slowly nobody is really into it,” Flores said. “But when we’re getting through the lineup quick it is a lot easier to get hits and it is just a lot easier to score runs.”

Starter Trent Massaro did his part on the mound, striking out 10 in five full innings to earn the victory. The left-hander limited the base runners, scattering three hits and three walks throughout.

South Plantation’s inability to string hits together left the team frustrated, but not down-trodden. The roster is full of upbeat players with the drive and confidence to keep battling, and the coaching staff pulled the right strings to give the team its best chance to come back. Ultimately, it just came down to execution.

“We have to just keep working hard in practice, keep getting the reps and keep being sound defensively, and keep throwing strikes,” Manuell said. “When you get the opportunity, you have got to make the most of it.”