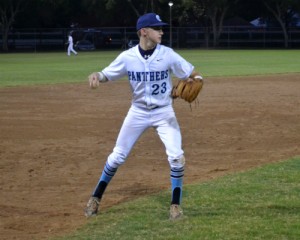 Third baseman Greg Budden was one of the Panthers’ offensive leaders, recording two hits and knocking in a run.

Behind a sparkling complete-game start by Tommy Romero and a six-run offensive showing led by Greg Budden and James Doherty, Coral Springs Charter downed the University Suns 6-3 on Wednesday night at Cypress Park. The Panthers picked up an important district win that keeps them in the running for the 4A-14 title.

It took Romero a few innings to get going, as he gave up three runs in his second inning of work. But once he did, it was smooth sailing the rest of the way through. Flashing heat which he ramped up all the way to the low 90’s and an out-pitch, low-60’s curveball that dropped off at least 20 miles-per-hour, the senior tallied eight strikeouts to just one walk.

“Tommy is our guy,” Manager Mike Higgins said of his starter. “We are thrilled with our top three pitchers, but if we had to pick a number one it would probably be Tommy. When he goes, our team goes. He pitched a great game tonight. He’s starting to come around and do what he is able to do.”

Romero attributed his success on the mound to trying not to do too much.

Romero succeeded in throwing both strikes and first-pitch strikes on the night. Of his 95 total offerings, 61 of them went for strikes and he got ahead in the count 0-1 to over 60% of the batters he faced.

On the offensive side of the ball, not attempting to be superabundant was also the theme on the night for the Panthers. They plated six runs via just two extra base hits, as the rest of their ten knocks were singles. The Panthers got three runs in both the second and third innings by stringing together hits and playing small-ball.

In the second, Doherty started things off with a single, his first of two hits on the night. After Samuel Roman put a runner in scoring position with a great sacrifice bunt, Greg Budden plated the game’s first run with an RBI single. Shane Magrann then smoked a double down the left field line, putting runners at the corners for Gary DeMyer, who plated two more on an error. 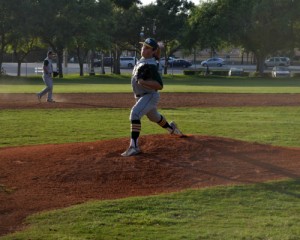 The same area of the lineup was responsible for most of the damage done in a similar third inning. After DeMyer singled to start the frame, Zack Webber singled to put two runners on. Victor Pimental contributed a great sac bunt to put the runners in scoring position, paving the way for a Doherty RBI double. Roman and Gavin Levy followed with two more RBI singles.

Higgins said the players followed the blueprint he has laid out perfectly.

“That’s what we have to do because that’s the type of team we have,” Higgins said. “We don’t have a bunch of mashers in our lineup, so we have to be able to be opportunists and score runs when we have guys on base. We work on those things in practice, and they don’t always come to fruition. But they did tonight.”

As for the Panthers’ play of late, Higgins has been plenty proud of the effort put forth. Should it continue, Higgins sees no reason why Coral Springs Charter can’t challenge for the district crown.

“We are starting to play better: we have won three of our last four games,” Higgins said. “We have one of those teams that feel like we can beat anyone on any given day. If we don’t have focus and we aren’t ready to play, it’s going to be a long night. But recently, it has been there. We are thrilled with the way things have been going lately.”

Suns’ starter Jesse Crosno had his troubles early but he was able to settle in nicely in the middle frames. Using a mid-70’s fastball and changeup combination and a good out-pitch curveball, Crosno set sides down in order in both the fourth and fifth innings, and ended his night with a solid sixth. Despite his troubles, he did not give up much solid contact, but more balls that happened to find holes in front of his defense.

Manager Dan Rovetto lauded Crosno’s ability to keep his head up through adversity, stick to his game, and trust his stuff. He only gave up four earned runs, and kept his team in the contest. 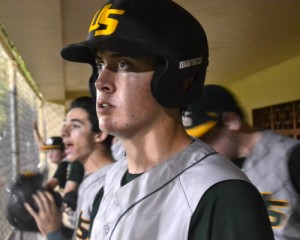 Suns center fielder Evan McKendry was on base three times.

“Jesse did a great job of competing,” Rovetto said. “I told him when I went out there in the third that he was on the verge of being taken out of the game. But he was able to take a deep breath, re-focus and pitch us deep into the game. He tossed a complete game on just 77 pitches and only gave up a few earned runs. Great job by him; great resolve by him.”

The Suns enjoyed a good offensive inning in the third. They plated two runs on back-to-back singles by Julian Cabrera and Michael Glantz, another run when Sammy Guillmore reached on an error and an RBI single on the first of two hits by Evan McKendry. After that, the Suns would not muster much more against Romero.

“You’ve got to give Tommy Romero a lot of credit,” Rovetto said. “He was better than our team tonight and we give him credit. We faced a front-line arm, but that’s what happens in this district.”

As far as the district goes, it does not get any easier for the Suns as they head to Pine Crest’s Roschman Field to take on another tough Panthers squad on Friday. If the Suns are going to be successful against Pine Crest, Rovetto stresses the need to make more contact and force the opposing defense to make plays.