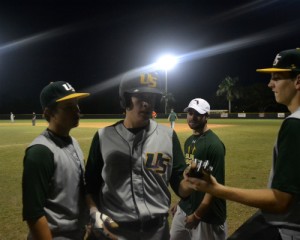 The same spectacular pitching and defense that the University Suns used to take down Monarch and punch their ticket to the finals of the South Broward Spring Classic followed them into the championship Thursday night. Aided by good field work from his teammates behind him, Evan McKendry tossed five lights out innings, leading the Suns to a 6-1 victory and the Len Koch trophy.

McKendry came out of the gates firing, striking out the side on just twelve pitches in the first inning, and he did not let up for 15 outs. Using a repertoire including a high 80s fastball and a low 60s curveball, the junior had Bengals hitters guessing all night long. Totaling six strikeouts, McKendry remained perfect through four and one-third innings.

On the infield, the Suns did textbook work behind their starter, allowing him to hold a no-hitter through five and one-third innings. McKendry attributed his success on the hill to being able to find the handle on his breaking pitches early and not having to rely too heavily on his heat, which kept hitters guessing and prevented them from catching up with it.

“Some starts I struggle because I am not able to find my off-speed stuff,” McKendry said. “So today, I tried to focus on getting those pitches over first then work off of that to make my fastball even harder to hit.”

Over the past three days, the Suns have faced some of the best teams Broward County has to offer, including Monarch (13-3), which had scored 21 runs in its past four games before facing University and Piper (11-6), which came in Tuesday having scored 15 runs in its past 28 innings. Against the Suns, however, those two mighty offenses were only able to scratch across a run each.

Manager Dan Rovetto admitted he could not have asked for more from his squad defensively. 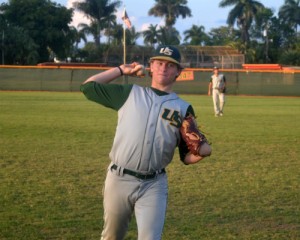 Jake Kubiliun was a key contributor offensively for the Suns.

On the offensive side of the ball, Jake Kubiliun, getting a rare start in center field, played the catalyst for the Suns. After Kyle Oren singled to begin the second inning, Kubiliun executed a perfect hit-and-run swing, going the opposite way with an outside pitch and placing a ball behind the second baseman, who had ran to cover first on the stolen-base attempt. The play, which worked exactly how it is drawn up, ended with runners on first and third, and paved the way for Julian Cabrera fielder’s choice RBI.

“When he put the hit -and-run on, I was just looking for a ball away that I could drive,” Kubilun said. “He put it right in the other batter’s box perfectly for me to line it up and drive it.”

For Kubiliun, primarily a pitcher who rarely sees the field, the single was the first of his two hits on the night. Regarding his success Tuesday at the plate, Kubiliun pointed to the knowledge base he holds as a pitcher that the average hitter does not otherwise. He has put extra work in recently in the batting cages, trying to shorten up his swings in order to help the Suns’ cause in any way possible.

“As a pitcher, you come in a little more knowledgeable than the average hitter, expecting different things in different situations and maybe looking at the approach a little differently. I used that to give me a little bit of a leverage,” Kubiliun said. “I’ve been working on my swings a lot in the cage lately on just trying to stay short. Nothing huge, no drop and drives, nothing special; just trying to help, just trying to put it in play and find a hole.”

Regarding Kubiliun and Oren’s perfectly executed hit-and-run as well as the rest of the Suns’ offensive effort on the night, Rovetto said everything went according to plan.

“We knew the guy starting for them was gonna be around the zone a lot, so that’s a guy you want to use the hit and run against,” Rovetto said. “We got in to a positive fastball count, and we executed the hit-and-run well with Jake hitting behind the runner, which was nice to see. Great job by Kyle Oren on the basepaths to go from first to third there as well. It kind of broke up the inning for us. With McKendry on the mound, we knew that runs were gonna be hard to come by for them, so after that, we were basically playing for a run an inning. That was the game plan, we stuck to it and it worked out.”

Despite facing some major adversity to start their season, things are coming together at the perfect time for University, which has won four of its past five games and taken home a championship trophy. Rovetto lauded his team’s ability to stay the course through the stormy weather and is plenty proud that the Suns are now shining bright. Rovetto views the Len Koch trophy as a product of his team’s tenacity and resolve and is looking forward to displaying that symbol for all of of those who walk the halls of University School to see.

“It’s great for our school and our program. We have been through some things, but we are starting to play some of the best baseball we can play,” Rovetto said. “It’s going to be nice to take this back and be able to present our athletic director, Paul Herfurth, and the rest of our school with this trophy. That’s a huge honor for our program.”

The Piper Bengals displayed some fabulous tenacity and resolve of their own on the night. Along with having to do battle with a dominant starting pitcher, Piper had to overcome some high emotions after left fielder Michael Cuminale left the field in an ambulance as a result of being hit in the face by a McKendry fastball in the fourth inning. Admirably, the Bengals were able to do so as relievers Ryan Rottman and Jacob Makoulian were able to pick up their struggling starter and limit a strong Suns offense to just one more run over the final three frames. 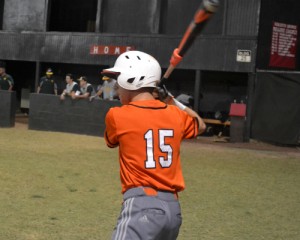 Brian Clancy had a hit and an RBI for the Bengals.

The Piper offense was able to get in to the game in the fifth, breaking up McKendry’s no-hitter. In the final frame, the Bengals were able to break up McKendry’s and Buddy Hayward’s collective shutout by collecting three hits and putting four men on base. Although his team came up short and suffered its first loss in its past five games, Manager Pat Pisani praised his team’s ability to stare down so many different hardships at one time and overcome them by refusing to give up and put forth a good effort for a full seven frames.

“Evan McKendry is probably one of the top pitchers we are going to face all year, and he was in complete command of all his pitches. We needed to make adjustments at the plate, and we weren’t able to,” Pisani said. “But regardless of the outcome of today’s game, I am extremely proud of my players. The fact that we were playing in a championship game, they have been working extremely hard and they have been playing good baseball all season long.”

On the incident involving Cuminale, Pisani’s message to his team was to not take baseball for granted. He also praised their ability to get their heads back in the game and continue to give 100 percent immediately after such a tough moment.

“When something happens like that to one of your teammates, it puts it in to perspective that this is just a game,” Pisani said. “Both teams are trying to win the ballgame, but when something happens like that to a teammate, you just kind of take a step back and you are just more worried about his health rather than trying to win the game. Michael is a tough kid, and I can guarantee you he is going to bounce back. I’m proud of the fact that we didn’t quit, we didn’t lay down, and we were able to play them for a full 21 outs. It was a competitive ballgame, and we just kind of fell a bit short tonight.”