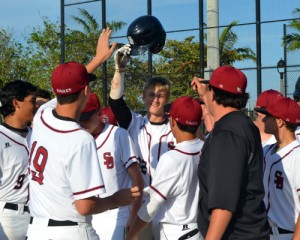 Overview – The chase is on to see if anyone can catch Douglas from winning the district title again. The Eagles were perfect in district play this year, and are widely recognized as one of the most dangerous teams in the area. Their goal is to finish as the top 8A team in the state, and winning the district title is an important part of that process. Either Coral Springs or Deerfield Beach is going to have its hands full in the semifinal.

On the opposite end of the bracket is an intriguing semifinal meeting between Taravella and Coral Glades. First-year Jaguars Manager Mike Goulette was formally the JV Coach for the Trojans for many years, and his club lost both meetings to Taravella this season. The Trojans will have to make it four in a row to keep their season alive, as they also won this match up in last year’s district tournament.

1. Douglas – The Eagles have been on a mission this year to take that final step and reach the state tournament. The team was just a few outs away from accomplishing that goal last season, and it has returned with a vengeance in 2015. Douglas played its typically tough schedule, and has proven itself against the best of the best. The club’s success this year included a 8-0 mark in district play, meaning whichever team it faces in the district semifinals will one it knows it can beat.

This is the first class that came in four years ago when Todd Fitz-Gerald originally took over as Manager of the program in 2012. They will be his first graduating class, and they are his guys. They understand what they want to do, and when they go out to practice everyday they get what the coaches are doing.

“We are driven by the desire to win a state championship,” senior Yorvis Torrealba said. “Every day in practice we are just working hard and trying to make it to states and win a state ring. We are like a family here, and every single day we are hanging out together and going over each other’s houses and hanging out in school. It is a great atmosphere here and we are always picking each other up between innings and being more as a team.”

Douglas has scored runs with ease this year, thanks in large part to the combination of speed and power in its lineup. Pemron Burrows and Colton Welker have led the team in runs, while Devin Conn, Dominic DiCaprio and Blake Bottomley have been productive at driving runners in.

Pitching has been equally dominant for the club. Jesus Luzardo has been the team’s ace for the past several seasons, and he has performed well against the toughest opponents on the schedule. The left-hander has eaten up innings and given his team an excellent chance to win every time he is on the bump.

Matt Chabarek, Conn and Alec Duffy have been the main guys out of the bullpen, while Alex Ginn and Ricky Miranda have split time in the rotation. 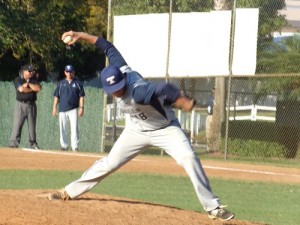 2. Taravella – The Trojans did everything they can to get ready for the playoffs this year. They played one of the toughest schedules around, including contests against two of the two teams in Class 8A in Park Vista and Flanagan. Taravella held its own this year, posting its second straight winning record under third-year Manager Alan Clark.

All that hard work culminates into one big game against Coral Glades, a meeting that will determine if the Trojans will get another shot at the district title and also putting the team back into the regional playoffs. Taravella won both games this year, and has taken four of the past five in this rivalry. It also won this meting last season, and looks for a repeat performance from that 10-0 victory.

Pitching has been the strength of the team, which the Jaguars saw in facing both of the Trojans’ top two hurlers already this year. Zach Pernick has led the starting rotation, leading the club in strikeouts, innings pitched and wins. Logan Costanzo, Gavin Robinson and Nik Sanders have also been key in the rotation. Blake Bowman leads a deep bullpen that also features Shanday Gordon and Livan Hernandez.

Speed is a big part of the offensive approach. The lineup features a lot of guys who excel at getting on base moving around the bases and then scoring runs. Robinson and Henry Matias were key in this department, with Sanders and Santiago Cardona leading the group in RBIs.

“Sometimes we start slow but after our second or third at-bats, we start to swing the bat better,” Clark said during the season. “Overall, offensively, we are doing our job.”

3. Coral Glades – Manager Mike Goulette wanted to make sure his team got into the best position it could for the district tournament. By securing the third seed the Jaguars are just one win away from reaching the district championship and also getting back to the regional playoffs for the first time in two years. They opportunity is there just like the team hoped it would be, and now is the chance for the players to seize the opportunity and make some noise in the playoffs.

As has often been the case between these two rivals, Coral Glades will need a win over Taravella in order to jump-start any potential playoff run. These two clubs have avoided one another in the playoffs in recent years, with Taravella winning the only playoff meeting over the last five years.

After failing to score a run against the Trojans in the playoffs last year, offense will be key to victory this time around. Coral Glades had a solid showing at the plate this season, and the team continues to pride itself on the ability to limit strikeouts and put the ball in play. Despite featuring a young lineup, the Jaguars only saw a slight increase in the number of strikeouts they suffered during the year.

“We tell them to just keep fighting,” Goulette said. “When they have the two-strike approach they have to keep battling and push through. This is a very young team and sometimes they get aggressive, but we teach them with two strikes that we have to battle down and try to put the ball in play. They just keep fighting and don’t stop.”

Michael Grey and Joe Juliano rose up to make names for themselves as the top hitters on the club this season. Veteran Alex Lara also continued to thrive at the top of the order, getting on base to set the table for the big hitters behind him.

An experienced group of starters led the pitching staff in 2015. TJ Williams and TJ Densmore combined for the majority of the starts throughout the year, and both delivered fine seasons to lead the club. Preston Vegotsky and Justin McDaniel have been the main guys out of a bullpen that has also performed well this season.

4. Coral Springs – A preseason injury to the club’s top player Michael Montalvo set the Colts back a bit this season. Without that strong leadership presence on the mound and in the lineup, the team has not had the success it hoped for heading into the season. As would be the case for most teams, it has simply not been the same without their top player.

The Colts do have a good core of young players, particularly on the mound. Starter Phil Quinn has embraced his role as the main guy on the hill, getting the ball in all the biggest games against the toughest opposition. The junior has posted solid numbers and always gives his team its best chance to win with him on the mound. 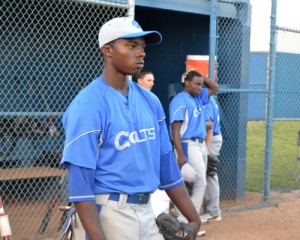 Max Lazar has stepped up to be a bright spot for the pitching staff. Whether in relief or as a starter, the sophomore has posted strong numbers to lead the club. Alexsi Pogrebnov, Henrique DeOliveira and Jeremy Szozda round out the bullpen.

The lineup has also been inconsistent without its centerpiece supplanted in the heart of the order. The Colts averaged less than four runs per game and hit just under .250 as a group. Darrin Brown, Rahim Abdul-Aziz and Sean Baran all led the club in hitting, while Quinn and Szozda had the most success driving runners in.

Coral Springs won two closes contests with the Bucks this season, and have gone 10-1 against them over the past five years. The Colts will have to continue that dominance to keep their season going and advance to a meeting with top-seeded Douglas.

5. Deerfield Beach – The Bucks struggled through another tough season, as the program has not posted a winning record in over a decade. The club has some strong pieces, but has lacked the depth and cohesion to put it all together on the field.

Deerfield takes on a Coral Springs team that has had its number in recent years, and an upset-victory would be a long overdue reward for the program. The team could lay to rest a lot of recent struggles by giving it something positive to build off of for the future.

The Bucks have a decent crop of pitchers, and may have to mix them all into action in the playoffs. Seniors Cezzane Omar, Matthew Simons and Kyle Miller have all logged plenty of varsity innings in their careers, and each is capable of leading the way in the district tournament.

Trent Youstin and Connor Kelly lead an offense that has shown signs of improvement this year. The Bucks averaged over four runs per game this season, improving by nearly a run per game from a year ago.