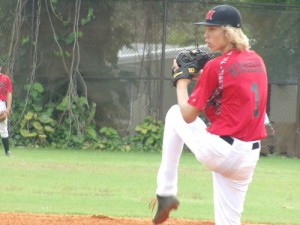 The Monarch Knights started early on Friday morning and they never looked back. After scoring three runs in the first inning, Monarch kept the pressure on the Fort Lauderdale Flying L’s and beat them 10-0 in a five-inning game. The victory was sweet for the Knights, as they took the 7A-14 title game from the Flying L’s team that had beaten the Knights in the same game last year.

“We didn’t need too much incentive,” Assistant Coach Mike Collins said. “As soon as we stepped off the bus, all the guys could see their sign claiming the 2014 district title. It got our attention.”

After Knights starting pitcher Joey Hennessey got the side in order in the top of the first, Monarch got down to business. After two hit batsmen and a walk, senior Joey Gerber hit a shot down the left field line for a two-RBI double. Following another walk to load the bases, Joey Rugare drove in the third run of the inning on a sacrifice fly ball to center field.

Fort Lauderdale starting pitcher Michael Reiskind did his best to hold down the potent Knight line up. After giving up three runs in the first, he held them scoreless for the next two innings.

“We can’t win a championship game by putting men on base,” Flying L’s Manager Terry Portice stated. ” But give them credit, when they had guys on base, they drove them in.”

Hennessey was efficient and dominating on the mound. He cruised through the first three innings, setting down all nine Fort Lauderdale batters he faced.

“Hennessey was awesome today,” catcher Jonathan Benestad boasted. “He hit my mitt and had great control. This is so great; we won the district, and our pitching staff will be ready to win again next week.”

Monarch did its damage in the next two innings. The Knights brought ten batters to the plate in the fourth inning and scored four runs off of Reiskind and reliever Rene Blanco. A solo home run by Benestad sparked the Knights, as they loaded the bases after that and scored three more runs to make the score 7-0 after four. Monarch put the game away with a two-run double by James Buckley in the bottom of the fifth and an RBI single by senior Nick Taylor to seal the victory. 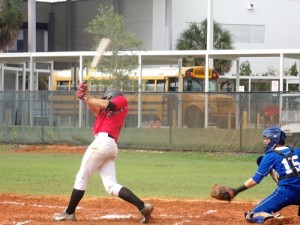 “Today was one of those days,” Taylor stated. “I saw the ball real well and was able to make solid contact.”

Monarch leadoff hitter, senior Manny Rojas, was on base all four times and scored two runs for the Knights. Nick Taylor had three hits, two RBIs and scored twice. Buckley scored three times and Benestad went 2-for-2 with two runs.

Trevor Jones and Hassan Westbrook recorded the only hits against Hennessey, who went five shutout innings and struck out four.

“I felt very comfortable today. My stuff was good and Jonathan behind the plate helped me keep my concentration,” Hennessey said. “The team played well and we are moving on.”

Both teams move on to the regional playoffs, but the sweet district victory belongs to the Monarch Knights.

“One of our goals was to get the first seed in the district. We did that,” Manager Joe Franco stated. “Another was to host a regional playoff. By winning today, we have reached that. But there is more to do and we are going to stay hungry. Our pitching and defense is solid and if the hitting stays hot, we will contend.”

Should both teams survive the regional quarterfinals, they would meet again in the semifinals.

“The team that beat us is a good team,” Portice said. “We get a chance to play next week. We live another day.”