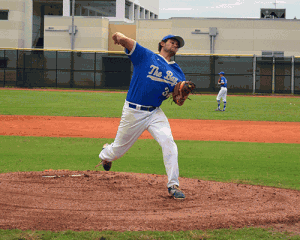 Luis Sucre tossed a quality complete game, leading the Lightning to the 8A-12 championship game.

Fueled by a complete game by Luis Sucre, the Cypress Bay Lightning eeked out a hard-fought 4-3 victory over the Piper Bengals to earn the right to defend the 8A-12 championship.

Over his first four frames, Sucre was on the mound so infrequently that he may have burned more energy walking to and from the dugout. Utilizing low- to mid-80’s heat and live late breakers, he allowed only three opposing hitters to reach base while recording the first 13 outs. Thanks to a pickoff that erased a single in the first inning and a textbook 6-3 double play in the fourth, Sucre was only two over the minimum headed to the fifth.

Though he got out of that frame without giving up any runs, he began to get pitches up in the zone. This continued into the sixth inning, where the Bengals plated three and tied the game. But even after the tough frame, Manager Paul Liotti’s confidence in Sucre never wavered. Clinging to a one-run lead with their season on the line, Liotti didn’t even have as much as a pitcher warming up as the Bengals prepared to take their last licks.

“Our season was continuing or ending with Luis on the mound,” Liotti said. “That’s the kind of confidence we have in him. We were going to ride him all the way.”

Sucre did not let his coach down. With his location back under control, he promptly got the first two outs of the seventh before retiring the Bengals’ cleanup hitter to seal victory for the Lightning.

“Today was a good day,” Sucre said. “I was keeping my pitches low except for the one inning. I don’t worry. I know my team can back me up whenever I have bad innings. I just go out there and give it as much heart as I can and lay it all on the line.”

Sucre’s battery mate, Alex Abella, was not short on praise for the night his teammate put together.

“He had amazing placement and location on all of his pitches. It was a heck of a game for him,” Abella said. “It takes a lot of guts to throw full-count curveballs. He was able to strike two people out on them. His curveball was working all day, and he was locating his fastball in the corners. He’s one of the gutsiest pitchers I know.” 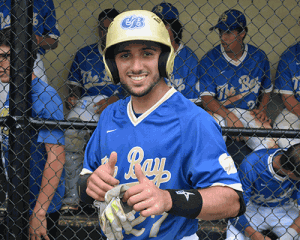 Catcher Alex Abella doubled and drove in two runs for the Lightning.

Sucre was staked to a three-run lead before he even took the hill thanks to the bats of Abella and Jonathan Pino. After Anthony Figeroua walked and Nick Orlando reached on an error, Pino plated the Lightning’s first run with an RBI double. With two outs, Abella went down in the zone and got a 1-1 fastball, driving it to deep left-center field. The drive cleared the bases and plated two.

“I’ve been practing a lot lately with out hitting coach Louis Hernandez. He’s a great coach and has taught me a lot of things,” Abella said. “In that AB, I just stayed level stayed through that ball all the way and I was able to rip it into the gap. Coach Liotti has had all the confidence in the world in me to stay middle away and think about middle approach. At the beginning of the season, that was a big problem of mine, but because of all of my coaches’ and teammate’s confidence in me, I’ve been able to have that approach. I have to say thank you to them for that.”

After Piper tied the game in their half of the sixth, an unlikely hero emerged for the Lightning. With the bases loaded and only one out, Liotta called upon freshman Eddie Rodriguez to pinch hit. Not trying to do too much, Rodriguez took a perfect situational uppercut swing, skying a ball to the outfield and plating the eventual winning run.

“I’m very proud that he was able to handle the moment,” Liotti said. “That is impressive for a freshman.”

Though he was infinitely proud of his team’s collective resolve to gut out the hard-fought victory with so much at stake, Liotti admitted it is nothing he hasn’t come to be accustomed to from this year’s Cypress Bay team.

“Every time our backs are against the wall they don’t buckle,” Liotti said. “They’ve got the toughness to battle through anything.”

As big as the victory was, the Lightning will have little time to celebrate as the district title game gets under way Thursday at 4:00 PM. Despite the quick turnaround, Liotti is putting his trust in the hope that the same resolve his squad showed Wednesday will carry into that battle against Cooper City.

“I don’t need to give them a big ra-ra speech,” Liotti said. “I know they will be ready to go.”

After falling behind early, Piper showed some great resolve of its own, staging a huge two-out rally and plating three runs in the sixth. With two runners in scoring position, Eduardo Delgado skied a ball over the fielder’s head that rolled to the wall. After a Joe Sallustio single put runners at the corners, Christopher Nunez plated the tying run with his own base knock. As good as the inning was, the Bengals stranded a runner in scoring position in that frame and another in the seventh. Manager Pat Pisani pointed to the inability to pick up one more big hit as a reason for coming up just short. 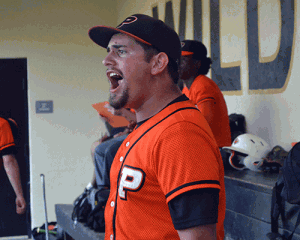 Along with being the vocal leader in the dugout, Piper starter Joe Sallustio tossed six quality frames.

“We fell behind 3-0 early, but I’m glad of the fact we didn’t lose our composure after that,” Pisani said. “We got going in the sixth inning, and I thought we had them on the ropes. If we got one more big hit, I think we would have gotten all the momentum going, but it just didn’t work out.

Sallustio, a junior, got the nod on the hill for the Bengals and had an afternoon similar to that of his counterpart. The junior’s rough inning came in the first frame, but after that, he settled in nicely, kept his team competitive while turning in a quality start. Using a slow but fluid motion, Sallustio pumped the zone with mid-80s heat. He had good movement on his breakers and kept the ball low in the zone, inducing nine groundouts. Sallustio was around the zone all day as 51 of his 77 offerings went for strikes. He got ahead early and often as he threw a first-pitch strike to 18 of the 25 hitters he faced.

“Joe’s been my most consistent pitcher all season long,” Pisani said. “He usually gets ahead of batters, and we can count on him to throw strikes. We usually play good defense behind him. We did that after the first inning. The bottom line is we played them hard for seven innings. I tip my hat to Cypress Bay. They were the better team today.”

With their season coming to an end, Pisani and the Bengals say goodbye to four seniors: Bryan Clancy, Paul McDonald, Ryan Hoffman and Eduardo Delgado.

“My four seniors gave me everything they had this year,” Pisani said. “I’m going to miss them. Baseball is just a small part of their life, but I was glad to be their head coach. I know that in their future endeavors, they will be very successful young men.”

Despite the emotions involved in saying farewell to some of his kids, Pisani already is excited for next season when a solid nucleus of returning seniors take the reigns and attempt to get the Bengals to the next level. Pisani found some solace in the loss, admitting that it can be a good learning experience for next year’s squad. With the understanding of what kind of emotions are involved in such a tough loss, Pisani hopes the 2016 Bengals will be all that much more inclined to avoid it.

“I wish next season started tomorrow, even though our season ended today,” Pisani said. “My core team is all juniors. Next year, we will be predominantly seniors. I want this loss to linger with the juniors. I want them to know what it feels like so that when we get this opportunity next year, what happened today stays with them and they use it as motivation.”