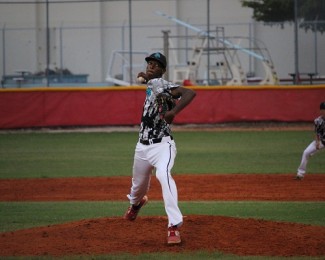 Triston McKenzie pitched another gem for the Wildcats.

Over the past couple of years, Triston McKenzie of the Royal Palm Beach Wildcats has built a reputation as one of the best pitchers in Palm Beach County. Over the past week, he’s shown folks in Broward County what all the hype is about.

After striking out nine in a four-inning, two-hit shutout of Fort Lauderdale in last week’s regional quarterfinals, McKenzie one-upped himself on Tuesday night when he and the Wildcats traveled to Deerfield Beach High School to take on the Monarch Knights in a regional semifinal. Despite needing an extra frame to determine a winner, the right-handed fireballer tossed a complete-game shutout to help Royal Palm to a 1-0 victory, striking out 16 in the process while scattering just three hits.

It was exactly the kind of effort that Royal Palm Manager Kason Gabbard has come to expect from his ace.

“Another dominating start,” Gabbard said. “When he’s got command of the strike zone with his fastball, it just makes his off-speed that much better.”

What was perhaps most impressive about McKenzie’s performance was that he did not do it by relying solely on his nearly untouchable heater, which ranges in the high 80s to low 90s, but has also been clocked as high as 94. On Tuesday, his off-speed pitches were just as lethal, as Gabbard and his pitcher took special care to mix things up and keep the Monarch hitters guessing.

“Most of the time, teams come out and they know who’s pitching,” McKenzie said about his mound strategy. “They kind of gear up and know that I’m going to try and throw the ball past them. So, they’re sitting fastball, and I tried to change up my game plan and mix it up a little bit more to keep them off balance.”

The approach worked. McKenzie fanned two in the first inning, then struck out the side in order in the second. The first batter of the third inning never took that bat off of his shoulder as he went down on three straight strikes as well.

Monarch’s number nine hitter, Jonathan Benestad, finally broke through with a two-out single later in the third, but McKenzie responded by notching his seventh strikeout of the young evening. He opened the fourth with two more, but from there ran into some trouble. Nick Taylor drew a walk, the only one McKenzie issued on the night, and then Joey Gerber flared the first pitch he saw into left field for a base hit. C.J. Delbosque followed that up by reaching on an error to load the bases for Monarch and set up the best scoring opportunity it had all game. McKenzie ended the inning as he began it, tossing another strikeout to make it out of danger with the game still scoreless. 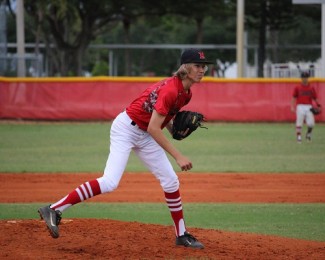 “He’s a fighter,” Gabbard said. “He got into a couple of situations with runners in scoring position, but that’s just the way he is. I think it makes him a better pitcher when he’s really got to buckle down.”

In the bottom of the fifth, the Wildcats’ Sean Houck made a great diving stab of a hard shot down the third-base line by Eddie Mercado for the first out, but was unable to make the same play on the very next pitch, giving Benestad his second hit of the game. Benestad’s courtesy runner, Ed Hammel, then stole second base, putting another runner in scoring position for the Knights. But McKenzie locked it down and did not allow another base runner the rest of the way.

All the while Monarch’s own ace, Joey Hennessey, kept pace, giving up just three hits of his own while striking out five and hanging seven zeroes.

Zach Odell touched him for a base hit in the first at-bat of the game but was quickly erased while trying to swipe second base. Royal Palm freshman catcher Nick Toney poked a 1-2 pitch through the right side of the infield for a base hit in the third, but was also erased in the next at-bat, this time on a fielder’s choice. From there, Hennessey did not allow another hit until the seventh frame, although Brandon Hernandez did reach second base against him in the fourth thanks to an error and stolen base. Like the others before him, he was sent back to the bench empty-handed after getting caught trying to steal third.

Just as it was beginning to look as though this pitchers’ duel could go on all night, Royal Palm made its move. With Matt Rumpf spelling Hennessey in the eighth, Sean Malynn drew a lead-off walk. The speedy center fielder stole second on a hit-and-run attempt that resulted in a swing and a miss, and then Gabbard put the sign on for Travis Jacklin to lay down a bunt. Jacklin dropped it down the third-base line, but rather than take the sacrifice, Monarch tried unsuccessfully for the out at third.

Jacklin stole second uncontested, setting up a two-RBI situation for the next batter, Toney. After falling behind 0-2, Toney got a piece of one and sent it into left field. With the Monarch defense playing in, the ball was able to make it over the fielder’s head, giving Malynn plenty of time to race home for the go-ahead run. Jacklin tried to add some insurance on the play but was unable to beat the throw home.

Asked if he felt any added pressure because of his youth, Toney admitted that he did, but not for the reason one might expect.

“It’s not so much pressure about letting myself down,” Toney said. “It’s more about the seniors, because it’s their last time out here and I grind out there just for them, so they can continue to keep playing.”

Perhaps no one was more appreciative of that effort than McKenzie. 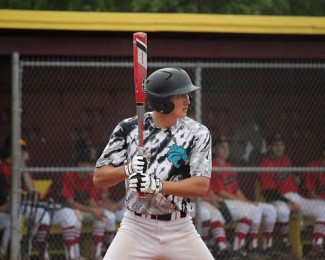 Sean Malynn crossed home in the eighth inning for the game’s only run.

“I’m especially grateful to my offense because I know, especially against a great team, you’re not going to get many runs,” McKenzie said. “The fact that we were able to push one across late in the game allowed me to go out there and get my team the win.”

The game marked the first time since 2012 that either team had made it this far into the postseason. Although Monarch Manager Joe Franco would have liked to go even further, he takes consolation in the fact that his team put together an outstanding season and will have some key players returning for another go-round next year.

“We had an excellent year, the kids played well, they fought hard,” Franco said. “Unfortunately, we ran into probably one of the best pitchers in the country, and he was on his ‘A’ game. We had some opportunities. We just couldn’t capitalize, and they did. Credit to them. They beat us fair and square.”

On the other side, Gabbard knows that what his team accomplished was no small feat.