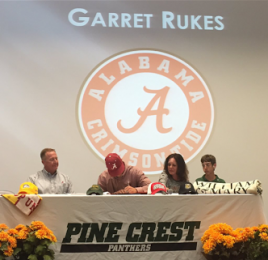 Pine Crest senior Garret Rukes signs his letter-of-intent to play for the University of Alabama.

Across South Florida and the nation high school seniors realized their dreams coming true of moving on to play college baseball. National Early Signing Day has become such an important occasion that it has now been extended to encompass a two-week stretch in which senior athletes are able to sign their college letters-of-intent with their respective colleges. Over these past two weeks numerous baseball players across Broward County embraced this opportunity to make their commitments official.

The special occasion was also one of important history for the Everglades baseball program, as Justin Carillo became the first player at the school to ever sign early when he inked his commitment to Eckerd College. The right-handed pitcher had a breakout junior season to help lead his program in the right direction, and now he has paved a new path for his teammates to strive to follow in the years ahead.

The Gators celebrated the day in a way that all true baseball fans can appreciate, as Carillo went out and played all nine positions on the field during the team’s fall game later that night. After pitching and playing all around the infield throughout the action, Carillo was given a chance to catch and then also shift and play all three outfield positions in the top of the seventh inning of a 9-7 win over The Dawgs.

“Being the first to sign was an incredible honor, and it felt great to share the signing with my family in the morning and then with my teammates later that day,” Carillo said. “We all love playing the game and being able to play all nine on such a special day was a moment I’ll never forget. I have played with a lot of talented teammates during my time at Everglades, all who were deserving but maybe didn’t get enough exposure. I hope that my signing can help open the door for Everglades baseball, because there is a load of talent that usually goes unnoticed.”

One of the larger groups from one school came at North Broward Prep, where four seniors enjoyed a special ceremony together with family, friends and members of the Eagles community. A pair of pitchers are headed to the University of Miami in Gregory Veliz and Evan McKendry, while Eduardo Antonini will attend Middle Tennessee State University and Dillon Belle-Viel signed with Nicholls State University. CJ Roth was unable to attend due to illness and will sign with Franklin and Marshall University at a later date, and softball player Samantha Williams was also honored as she signed with Florida Atlantic University.

Having the occasion recognized with a ceremony encompassing all the people closest to the signees helps make the memory more lasting and important. With all the attention on them, guys appreciate having their buddies and teammates there alongside them to help share the glow of the spotlight. Despite a little nerves or stage fright, the signing ceremonies are something the guys all look forward to. 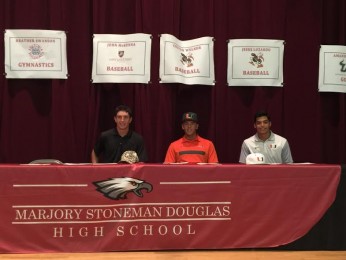 Douglas seniors John McKenna, Colton Welker and Jesus Luzardo are all smiles after signing their letters of intent.

“It was first class all the way,” said Greg Veliz, who took a moment during his speech to thank his family for making a very long drive Wednesday in order to attend. “It was beautiful to have all my teammates here, and to have a current teammate of mine who will also be my teammate at the University of Miami in Evan McKendry. It’s pretty cool to sit next to him now and sign with him and we get to go off to college together. It is going to be awesome.”

As exciting as it may be, the entire process of finding the right college fit can also be a strenuous and challenging experience. As each senior lifts that pen and touches it to the paper, there is an unmistakable euphoria that occurs to help wash away all the weight that bore down on them along the way. Any pressure felt is immediately swept away and replaced by the satisfaction of reaching the peak.

There are plenty of seniors still awaiting their chance or still making their choice, and those who have now signed can relate to what they are still going through. The recommendation is to find the place that feels right and to trust your decision when that time comes. Once a guy knows where he wants to go, the process gets easier to manage until you reach the finish line.

“It’s a relief,” Veliz agreed. “I committed to the University of Miami my sophomore year and I had a lot of options, but when I went to Miami it felt like home. I have been watching the Canes my whole life, living in South Florida my whole life. It just felt home. You see the palm trees and you just love it. Playing for the Hurricanes under Jim Morris and those great coaches at UM is a great honor, and signing with the University of Miami is definitely a dream come true.”