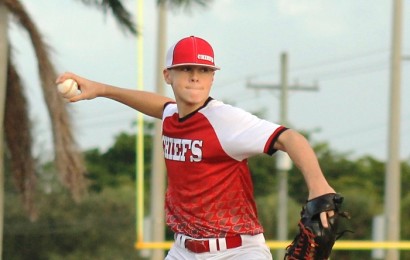 Pitching will be as important as ever in this tough district.

State realignment did not change much for this group, and the changes made were positive. Although a few solid rivals have moved elsewhere, the majority of the group remain intact with the teams they have competed with for the last several years, and with less teams it helps to free up the schedule a bit. These teams are still all familiar with each other and it should make for plenty of excitement when each squad meets twice apiece during the regular season.

“Our district the last few years have had some teams that were nationally ranked, so it is nice to get out of a district with those type of teams,” said Cardinal Gibbons manager Jason Hamilton. “Even though we played hard and competed well against them, we are getting into a district now that is much better overall. There is great parity in this district from top to bottom. It is just nice to switch it up every few years so we are not just playing the same teams over and over.”

Each squad has plenty of talent and the gauntlet to the district finals remains as tough as ever. There are no days off in this district and from top to bottom the difference between any of these teams is incredibly slim.

“Every team has their good players and the district is hard,” said Somerset Academy’s Juan F. Teixiera. “It is baseball. You have to play and you have to win; that’s how it is.”

Somerset manager Onel Garcia admits he will miss the teams they had enjoyed playing the last few years, such as Chaminade-Madonna. But the Panthers’ skipper is also excited to play a pair of games against the teams that are coming in too.

There is a great amount of comfort that comes to any baseball coach who knows he has an ace or two on his pitching staff. Over the past few seasons Cardinal Gibbons has been a perfect example of this, as manager Jason Hamilton was able to build everything around the strengths of several stud hurlers who led the team. Heading into the 2016 season the club does not have a recognized, clear-cut ace, and still Hamilton has all the reason to feel the same level of comfort.

“We probably have our toughest schedule ever since I have been here at Gibbons,” Hamilton admitted. “I know that doesn’t make sense with us not even knowing who our top pitching guys will be, but we didn’t duck anybody since we know we have so many guys that we can run out there on the mound. We are just going to try and get them better as the season goes along.”
[KEEP READING]

There is no underestimating the fact that the Eagles have assembled a team full of talented and very high-profile players. Adding to an already talented team that has traditionally been competitive every year, the program saw several big players from across South Florida transfer in this year. With five college signees already and a few guys with legitimate potential to be high Major League draft picks after this season, there is a lot of attention being focused on the club this season.

How the players handle the attention that is always on them could go a long way to determining how far they can go this season. Besides having every team in the district showing up with their A game for their district battles, each game all season long will also likely include a veritable army of college and professional scouts armed with clipboards and radar guns. The spotlight is on and it is staying on.

“We all know we’re good players,” said senior Greg Veliz. “It’s going to be a fun year because we are all together now and we’re going to try to win it all and see how far we can go with that.”

It is a rare chance that this much talent combines together on one team. The goal of a state championship is as realistic as ever for a program that has already gone to the state Final Four twice in the past six years. While that dream could be a reality, manager Brian Campbell also hopes this team this season remembers to relish and enjoy the rare chance to be a part of a special group like this.

“When you have good players, it’s obviously fun. It’s also challenging,” Campbell said. “We’ve got to make sure these guys are getting everything they can get out of this experience that they can in helping them become the best version of themselves. Not only does it benefit our program but it benefits them too as it puts them in the best possible scenario to succeed, whether it be college baseball or professional baseball. I feel really good about how the guys are working and I am looking forward to the season and seeing how it all comes together.”

Joe Giummule begins his second season as the head guy at Pompano Beach. The Tornadoes delivered a solid season a year ago and, even with the loss of some important table-setters, there is a strong nucleus that returns to build for better things in 2016. The expectations are going up as Giummule has made the schedule even tougher, and the district they have moved into is a bit deeper and tougher overall.

“I wouldn’t count us out because we work hard as a team and we give it our all,” said senior Bobby Aseere. “I think we have gelled together pretty well as a team this year. I am excited because I think we are going to do pretty good and give it to them.”

The offense is a strong suit of the club, with the entire middle of the order returning to lead the way. This could also prove more beneficial with so many tough pitchers across the district.

“The key is we have to coach well, we have to prepare well and we have to execute,” Giummule said. “If we do those three things everything else will take care of itself. It’s always about the little things: moving runners over, executing the plays and guys stepping up. You never know where somebody is going to be sick or not playing and if you are on the roster you have a rol,e and when your name is called and you get an opportunity you have to step up. When that happens it pushes other players and that is what pushes the good teams to become better teams.”

The 2016 Somerset baseball team will leave a mark this year. The sky is the limit for the Panthers, a veteran team full of seniors and plenty of talent. The guys have been playing together for years, they are strong in all the right places and they love playing together on this team. The squad is coming off its most successful season in program history, and there is an unmistakable hunger from them to make even more of this 2016 season.

“This team is all about chemistry and we have been playing together since we were like five years old,” senior Kenny Moreno-Costa said. “Everybody knows each other and what they can do and can’t do. When you see someone get the job done, the next guy then knows what he has to do. It is just chemistry. All of us practice every single day in the cages and on the field and we’re working really hard. We all really want this. We know what we’re good at or not good at. We know we can’t be perfect, but we are going to try to get there.”
[KEEP READING]