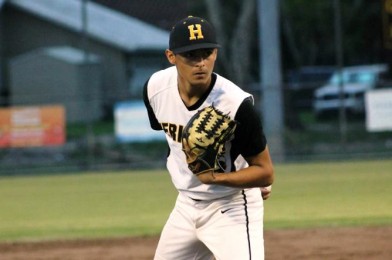 The Patriots are ready to lock in and go after their targets.

A district with some high-profile programs should help brings tons of exposure to the abundance of talent on these teams. Archbishop McCarthy and American Heritage are two programs that have both won multiple state titles and national recognition, and having two legitimate state contenders playing in the same district creates intensity that ripples throughout the district. Over the past few seasons since they were placed together these two have formed an exciting rivalry that has led to some excellent baseball games.

“I love those games,” American Heritage manager Bruce Aven said. “I want intensity and I want them out there. I want them packed in the stands and down the sidelines of the right field and left field lines and hanging over the centerfield fence. We are going to square up and play and we don’t care if it is against McCarthy or somebody else. We put a schedule together every year and whoever wants to play us we’re going to play. We’re not afraid to lose and if you beat us we see what we have to do. If we beat you we move forward.”

Nor is that the only rivalry in the district, as both Hallandale and Coconut Creek have also forged a nice rivalry together. The Cougars and Chargers enjoyed some high-scoring battles last season, and with both squads coming back much improved this year there should be plenty more like that ahead. They are so focused on one another there is no room to worry about Heritage or McCarthy yet.

Perhaps the only disappointment is that each team will only play each other once during the regular season.

The goal for the Patriots’ program is to win championships. Last season they accomplished a piece of that goal by taking home the district title, but their playoff run fell short of adding another state banner to the wall. Now a group with a good, young core comes together for another go at it this season.

“Every year a team takes on the characteristics of who they are going to be, but we do not know who we are going to be yet,” manager Bruce Aven said. “We have not played a game yet so we cannot tell yet. You have to stay healthy, you have to work hard and things have to fall your way. One thing I do know about this team is that they have heart, they have talent and they have character.”

Same as every year, Heritage plays a very impressive schedule that would make any local baseball fan excited to watch night in and night out. This is nothing new to the guys in the program, as they are used to it every season. They focus so much on what they do themselves and how what they are doing is going to get them to the goals at the end. But the slate of games on the Patriots’ 2016 schedule should provide all the different types of challenges one would hope to go through during the course of a season.

“I’m excited, and I like big games,” said senior Jacob Pino. “Anyone can win anyways so it doesn’t really matter. You just come out to play.”

No matter what happened last season, every year there are always guys that come aboard that didn’t experience anything that the returning guys did. For the Archbishop McCarthy Mavericks that means the new guys were not part of winning a state championship, the club’s fifth in six years. Those new guys have not tasted a championship and meanwhile their teammates have felt it before and they want it again even more. It adds a great mix of talent with desire and hard work, and it has been the perfect combination year after year at McCarthy.

A season ago a young and untested group went into the fire for the first time. Having now stood victorious at the mountaintop, they return this year as experienced veterans. The margin of error is smaller and they are rookies no more. With their success has come the ability to raise the expectations. For Manager Rich Bielski and his staff, this is not an issue.

“They are expecting more out of themselves and are not as shy as they were last year,” Bielski said. “There are no more excuses for rookie mistakes and they have worked on getting bigger and stronger and more confident. I’m more tolerant with rookies and younger guys, but as they get older they are held more accountable with what their responsibilities are. They see me being toughest on my veterans and returning players. Everyone does their job and we accomplish our goals.”
[KEEP READING]

After the season ended last year manager Pete Perez told his guys to take two weeks off before they got started working again for this year. A week later the whole team was calling and ready to go, and they have not stopped ever since. Guys practically live on the baseball field and they have been working harder than ever to make this season something special.

When Perez first took over three years ago he found it tough just to get enough experienced baseball players to field a full squad. But within that group were some young guys that believed in the process and committed to it, and now they are the core members of a large and experienced senior class. Perez admits it will be bittersweet to see them go at the end of the year, but they are thrilled at what they can accomplish together in the meantime.

“It is just about going out there every day, and we have improved a lot,” said senior Dalton Kaczmarik. “I’m happy that we have kept improving every year and hopefully this year will be the greatest.”

The team did not graduate anyone last season, and that was part of an intentional plan to have this group together for two years. The plan has worked so well that the coaches had to put locks on the clubhouse to keep guys from sneaking in after hours for extra work. It is a nice problem to have and even as the coaches scold them for it they cannot help but be glad that they have to do it.

“If they don’t make it in school, I know one of these guys can be a locksmith somewhere,” Perez joked. “I went from three years ago having 44 kids at tryouts and 42 of them played football. It was an awakening and it was the toughest year I ever had. But Margate has a lot of great baseball players and I just made a point to go out there and get them. It’s just been fun to see these guys come together. These guys have been waiting for this a long time and these guys deserve it.”

It is an exciting time for the Chargers’ program. The team has a nice nucleus of veteran players for the first time in seemingly forever, they are playing in a new ball park at Floyd Hall Stadium, and most importantly the school has two players who are set to sign their college letters of intent to become the first Hallandale baseball players to ever do so. Seniors Christopher Lugo and Winston Nunez will both sign with Northern Oklahoma Tonkawa.

“We feel like we’re the setting stone and we get to sign and we’re going to do great things in the coming year,” Lugo said. “Hopefully players can also sign later in the year.”

Stability is another big strength that is helping to set a foundation at Hallandale. Manager Greg Conde is in his third season now, and that consistency at the top is working to keep everything flowing in the same direction. For the majority of the players this is the only guy who has ever coached them in their high school careers.

“It’s good and it’s bad; it’s good because I know what they can give me but it’s bad because I think now sometimes they are a little too comfortable,” Conde said. “I have gotten to see them grow, not just as baseball players but as young men. Right now we’re in between, because we can be a lot better than we are but it is just that there is a lot of comfort right now. That is why I brought in some new coaches.”

Chris Davis came over from McArthur to join the staff this season, former player Amaury Archibald has returned to begin his coaching career and Porfirio Oden is back for another season as well. Having those guys has helped the program operate like any other club does, as well as helping to solidify the leadership at the top.

“Practices are a lot better,” said junior Pablo Oden. “I feel more comfortable with them and I feel I grow more when I play with them. I just really love my team and I can’t say it any other way.”