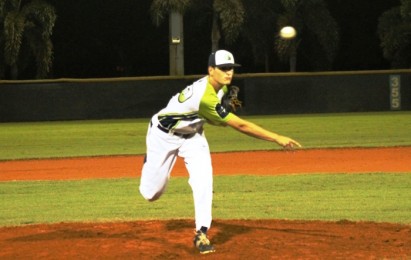 The Raiders have won three straight district titles and figure to be in the chase again this season.

This is perhaps the most wide-open district in Broward County. St. Thomas Aquinas is the only one of the five teams that posted a winning record a season ago, and the Raiders bring a much younger team back this year. The playing field is incredibly level and any of these five squads has the chance to make a run for the district championship. The opportunity is there for any to seize and the district meetings could be as competitive as any.

“This is where we’re putting all of our chips in the middle of the table and saying let’s go after everybody,” said Plantation manager Manny Aguilar. “We’re returning four senior starting pitchers and six starting players overall. So it is all or nothing for us this year.”

Every team should feel that same mentality going into district play. With the reality that this could be the year being as evident as it could ever be, the ones who hoist the district trophy at season’s end may simply be the team that believes in themselves and works the hardest to get it.

Flying L’s manager Terry Portice has been at the school for over twenty years, and there is no mistaking the devotion, heart and passion that he feels for his program. Over that time he has earned a reputation for blue-collar players that always play the game the right way and with every ounce of effort possible. It is a team that is respected by all and a program that sets a high standard on how to approach the game the right way.

“I got lucky to fall into a place that they treat me right and they treat our program well,” Portice said. “It is just a passion for me. I get the type of young men that I like to coach, blue collar kids that are like where I came from and who I still am. I get the opportunity to coach those same young men.”

Players take pride and ownership in playing for Fort Lauderdale, and it is not just another uniform to the guys that wear it. Every season the traditions continue and the leaders impart what Flying L baseball is all about down to the younger players, in order to keep the torch lit eternally.

“You come in here and they just accept you as family,” said senior ace Daniel Silva. “No matter what you do Coach always has our back. He has so much knowledge and every day we learn a new lesson on how to play the game.”

Silva will be a key piece of the team’s success this year as the next member of a long lineage of ace pitchers that have passed through the program. The club has developed its offense and defense over the past few seasons and it may still take some time to get things smoothed out there. But the traditional style of play and the unselfish contributions of the team will help to take the burden off Silva and the rest of the pitching staff.

Manager Pat Pisani enters his second season at the helm, and he returns a very deep and experienced team. Led by a core of 12 seniors that have played on the varsity squad together for the past three years, the Bengals are as experienced and battle-tested as any team in the district. Now the key will be to take that experience and learn from the past to make the plays needed this time around.

“The process for this year is to maintain that focus for the entire season leading into the playoffs,” Pisani said. “I told them at the end of Spring Break that I wanted to play our best baseball going into districts and we did not do that. So this year, with them all being seniors, the bottom line is that if we start strong we’re going to finish strong this year.”

Chemistry and communication should be a major strong suit for this group. The guys have had a long time to learn each other’s game on the field, and the closeness they share as friends makes the communication that much easier.

“Most of us were playing baseball together since even before high school, and we like to hang out together as family and friends,” said senior Eric Rath. “We have good chemistry, and when you compare to other teams that lost guys to graduation and transfers we have stayed together as a team. We look forward to this year.”

The focal point for the Plantation baseball team is to follow the mantra of “We Family First”. The concept is that the team does everything together and for each other to build a tight bond and create a unified front. The guys try to do everything as one so they are able to succeed both on and off the field.

This could be a very special season for a team that has come a long way over the last two years under Aguilar. Since taking over a two-win team with a cupboard that was very bare, the program has developed roots and a solid foundation, and now could be the season that all the hard work starts to pay off.

The club is strongest in the right place and that is in the pitching staff. With all the hurlers from a year ago back now, there is depth and experience that could be a huge difference in competing through this district.

“Sam Gonzalez and I are probably the two big dogs on the squad, and we have Jack Shanholtz, Aaron McCune and Enders Vargas,” said senior Connor Jones, a four-year starter who will likely see the ball in many of the big games. “I think our pitching staff is really stacked this year. You have me coming in as a submariner, Aaron McCune with his knuckleball and Sam Gonzalez is always on point. We’ve all been together for the past few years and we’re really close and we help each other with our pitching. We’ve come a long way.”

For the first time in ten years the road to the district championship does not involve rival Nova. The Raiders could see them down the road should both sides get into the regional playoffs, but otherwise they will not even play this season. For a team that relishes tradition it is a tough goodbye, but is also just another example of how clean the slate has been wiped going into this new season.

St. Thomas lost nearly every member of the roster from a year ago and comes into this year with a new and unproven group. There is plenty of athleticism and a strong work ethic, but there are very few varsity innings remaining and there will likely be some growing pains along the way.

“Our program and how we run things, we rely on the returners a lot,” admitted manager Troy Cameron. “They help us kind of recreate the culture every year and get everybody on the same page. This year we do have a different team in terms of that, as we have a lot more newcomers as opposed to returners the past few years. The veterans have their work cut out as leaders, and obviously we do as coaches too. We rely on the leaders to help them understand what we want and what we expect out of them. We have a young team this year.”

Despite the youth, the talent is there. The key is to get the guys to have confidence that they can compete at the varsity level. The few veteran leaders that remain can relate to what it was like coming in as a new and young guys trying to earn a spot, and they work to use their own personal memories to help guide these guys along this season.

“Playing on the team as a sophomore I really just got to come in and run the bases, but I got to know the program and what they expected,” said senior Cameron Krzeminski. “Last year playing every game I got to know the atmosphere of the game and how to slow it down. So now I have to teach that to these younger guys, how to slow the game down and how to react and not panic in certain situations because they have not been there before.”