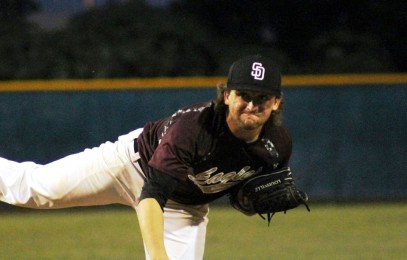 Douglas has a lot of pitching depth to help defend its district title.

The city of Coral Springs has long been a hotbed for baseball talent, and that has always provided for excellent games played between the local high school teams. State realignment managed to keep these old rivalries intact, while also adding more competition to the mix in bringing Monarch into the mix. The teams in this group are all competitive, and last season the five of them combined for a total of 76 victories. Heading into the 2016 campaign it is a safe assumption that these district battles will be close and as competitive as ever.

“The competition is definitely harder,” said Monarch senior Matthew Rumpf. “We have to go into it thinking to put our best guys out there every time and make sure our arms are healthy so we can get the win every time.”

Douglas has won the district the past few seasons and remains a huge contender this year. The Eagles swept the district a year ago and return a very veteran group this season. But nothing is guaranteed and Douglas manager Todd Fitz-Gerald is not about to let his guys get complacent and assume anything will ever be automatic.

“I love our team and I love the chemistry,” Fitz-Gerald said. “The kids on the team work hard everyday and there are no egos. Even my two biggest guys are out here working hard everyday and being leaders. They are involved and the kids really get along well together. It is good to see because at practice it is a lot of fun. The kids push each other to get better and they are all in it for the common goal.”

For the first time in over twenty years the Colts will be under new leadership this season, as former assistant Mike Federman steps in as the new manager this year. Federman inherits a fun and hard-working group with a large crop of veterans who are familiar with him after he was on the coaching staff for a long time.

“The kids worked really hard in the fall and we’re looking to compete in the district,” Federman said. “We think we have a chance to be in the finals. The fall was a little bit different; we spent a lot of time in the weight room. We played some minimal games just to try and get the kids refreshed and get them some strength in the fall. They look like the change was good for them and they are ready to compete.”

That approach marked a big change as opposed to previous years where the team played a lot of games together during the summer and fall seasons. But the players admitted it was a wrinkle that they enjoyed and that seemed to benefit everyone quite well.

“I loved the fall program with only the five games,” said junior Sean Baran. “It was more practice and more time in the weight room. It was more about getting ourselves better than comparing us to other teams.”

Pitching has long been the staple of Colts baseball, and that figures to still be the case. The club has a strong defensive group and a nice stable of veteran pitchers. If everyone plays to those strengths the team figures to be right where they need to be in the end.

“We have a good six or seven guys who are going to keep us in the ball game and throw strikes,” said senior Philip Quinn. “They keep the tempo up and get us on and off the field and let our offense get some runs for us.”

Douglas Manager Todd Fitz-Gerald is ready to knock the final door down. The past two seasons the Eagles have been one game away from a state berth, twice falling to Park Vista in the regional finals. Fitz-Gerald knows his guys are capable of getting back there, and it is the last opportunity for some seniors that have been a big part of the program’s success to get there and win that game and build momentum towards a state title. The Eagles know they will have to go through some good teams to do that, but those teams will also have to rise up in those moments.

Douglas brings as many as 12 seniors to the field this year, and the team is loaded with talent and depth. There is a unique chemistry between the guys, and a strong sense of pride in being part of the program. now in his fifth year at the helm, Fitz-Gerald is pleased with the way the team has grown together and with how the program has developed through all age levels.

“We preach fundamental baseball,” Fitz-Gerald said. “We do not have a lot of trick plays, so whatever we do we have to be good at. The focus is now on quality at bats and that is what the kids compete for now.”
[KEEP READING]

The Knights are coming off the most successful season in program history, a run that saw the team advance to the regional semifinals. The team had gone into the year with many questions in regards to the pitching staff and then that ended up being a major strength of the squad. A year later many of the guys who helped make that success possible return again with their eyes set on even bigger and better things in 2016.

“Last year was very fun and it was a good moment for everybody,” said manager Joe Franco. “But you can’t really worry about what happened last year. You just have to focus on the players you have this year and the type of team you have this year and really focus on the direction you will take this season. We’ve got a really solid pitching staff and that is really going to carry this team forward.”

Having two All County players returning on the mound, along with veteran CJ Delbosque taking on a larger role on the pitching staff, lets the team know what they have there. There are many other guys behind the three primary starters and the bullpen depth helps to keep the club strong on the mound for all seven innings.

“It’s good I’ll be pitching a lot more this year,” Delbosque said. “Last year I struggled in the fall when I was competing for a starting spot. So it is good to get a starting spot to compete with these other guys on the mound, and especially in this district. We lost two-thirds of our starting lineups and this district is going to be tougher than last year. But it is going to be fun.”

The most vital element that led to the team’s success last season was the chemistry. The Knights were as close as any team, they played excellent and unselfish team baseball and they enjoyed each game together as a group. The leaders set that tone with the right attitude and also the willingness to put the team first, as they were the first guys willing to drop down a sacrifice bunt and give themselves up in order to get a teammate into scoring position.

“Last year we had a couple of seniors who were big leaders and they knew how to have fun but also how to work hard at the same time,” said senior Joey Hennessey. “I know me, Matt and CJ are going to try to repeat that because it made a really good environment when we were playing the game.”

Taravella has enjoyed a nice share of success the past few seasons, advancing into the regional playoffs and proving itself a worthy contender each year. Although the club graduated a large senior class from the 2015 roster, there is a lot of excitement in what the current group is showing it is capable of.

“We’re not too bad,” said Trojans manager Alan Clark. “We don’t have as much experience as we have had in the past, such as last year’s seniors who were guys who had been varsity starters for three or four years. So there is going to be a little bit of a learning curve. But we are returning enough players that have experience that they can help the new guys out. They know the game and we try to teach them about the little things. You can’t just show up and play.”

The coaching staff focuses on executing the little things and not just letting the baseball talent carry through in every situation. The small details are often the most important ones, and should the guys always be focused and willing to handle those aspects the team expects more of the same success it has enjoyed these past few seasons.

Part of the success the Trojans continue to enjoy is in sending guys to college. The group already has four players who are signed to go on and play college baseball next year, which Clark admits is the most important thing a high school coach can see happen for the guys they spend working with and developing during their high school careers.

“It’s kind of surreal and when I took the offer I actually woke up the next day and was like, ‘OK, what just happened?’,” said senior Andrew Labosky, who signed with Nova Southeastern University. “I had to process it a little bit. But I am excited for college and I am excited for this year. I think the whole team is ready and I just want it to get started right now.”