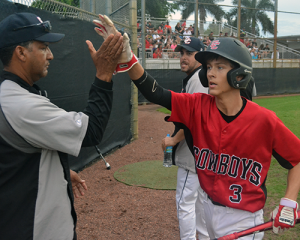 Parker Britton drove in the go-ahead run for the Cowboys.

Cooper City Manager Chris Delgado said it simply was a matter of the bats waking up when the Cowboys put together an eight-run sixth inning to break open a tie game with South Broward for a 9-1 win Tuesday.

Cameron Stadler opened the bottom of the sixth with a line-drive double to center field. Ethan Shae reached on a fielder’s choice, and Parker Britton smacked a line-drive single to center to bring home courtesy-runner James Runnebaum for the go-ahead run. Richard Silva followed with a single to score Britton, and courtesy-runner Joshua Valencia scored on an error that allowed Brandon Torres to get on base.

Devin Pole came through with a single before Joshua Valencia got on after being hit by a pitch. Robert Shanley lofted a sacrifice fly, bringing in Torres, and Cole Kantor doubled home Pole and Valencia. An error allowed Valencia to score for the final Cooper City run.

Silva doubled in Britton to give Cooper City a 1-0 in the bottom of the fourth. South Broward matched that in the top of the fifth when Manny Lebon tripled to score David Brown, who singled to lead off the inning.

Jeremy Bower got the win, allowing one run over six innings while striking out seven, walking three and giving up three hits. Britton, Silva and Stadler each went 2-for-3 and Kantor 2-for-4 for the Cowboys (4-0), who are off to the best start to a season the program has had since Charlie Cardinale’s 2006 squad started out 10-2.

“The bats and the pitching are coming together,” Delgado said.

He said the Cowboys also are capitalizing on solid team chemistry to win games.

“This is a real tight-knit group this year,” Delgado said. “They are very focused and have one goal in mind.”