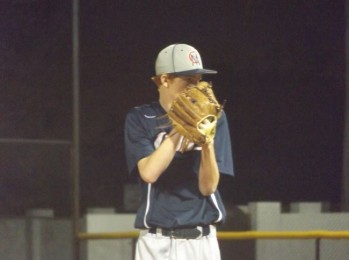 Michael Callari struck out three in two innings of work on Friday night for the Lions.

Coming off a tough and lopsided loss last night, the Chaminade-Madonna Lions came into Friday’s HSBN Broward Game of the Week hungry for a win. That hunger showed as Chaminade grabbed an 8-0 victory over host Highlands Christian.

“We had a tough one yesterday and we came back tonight, got it out of our systems, and had ourselves a good game tonight,” Lions manager Mike Moss said. “We hit the ball well, made the plays defensively, and threw strikes so tonight’s win definitely feels good.”

The team was boosted by a six-run fourth inning where players took advantage of any opportunity sent their way to come away with their third win of the season. Eric Bonkowski, catcher Wyatt Villella and right fielder Roberto Petit each had RBI hits in the inning, while extra runs would come across by way of smart base running on errors and wild pitches.

The big fourth-inning explosion came after Chaminade took an early lead in the first. Left fielder Chris Vickers had an infield hit to lead off the game and followed that up with a steal of second. A few batters later, second baseman Chris Schoeller drove his teammate in with an RBI single to give the Lions a lead they’d never relinquish.

“Our guys understand that baseball is like this sometimes and that we have to bounce back sometimes,” Moss said. “We have a day like we had yesterday and you can’t sulk about it — you need to play again tomorrow and get back up. Plus, having a game the next day allows you to get that bad taste out of your mouth, so to speak.”

Bonokowski had a lot to say about his performance, especially after the frustrating loss that occurred on Thursday.

“I feel pretty good. Last year wasn’t a good year for me — I didn’t get to play much on varsity — and I had a couple bad at-bats last night which I took into mind tonight,” Bonokowski said. “I thought about last night all night and I was able to come out with confidence today. Then I told myself to stop thinking so much.” 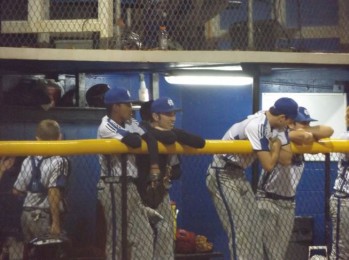 Players and coaches from the Knights look on in the late innings of their 8-0 loss.

Overthinking was something that didn’t seem to be occurring in the minds of the Lions pitching staff, who threw seven shutout innings. That all began with junior right-hander Michael Callari, who started the first two innings and struck out three. Also of note on the Lions side of pitching was Michael Blanco, who pitched two innings in relief and struck out four.

“Our pitchers definitely threw the ball well tonight,” Moss said. “We hit some good spots. There’s a few guys in that lineup who are really good and we handled them pretty well.”

For many young teams and coaches, an 8-0 loss where only three hits were recorded can be heartbreaking. But Highlands Christian manager Bruce Charlebois looked at things in a more positive way.

“After a loss like that, you tell your guys that we have to be excellent at the end of the season when the playoffs start,” Charlebois said. “You tell them that we’re 2-1 — we’ve played two very great games — and even though a lot of things went wrong tonight, we’re going to get back at things tomorrow. It’s important to remember that we love these guys the same when they fail as we do when they hit home runs.”

Charlebois did take away some positives from his team’s pitching performance, commenting that starter Kyle Bombardier competed very well and he looks forward to seeing what his young roster can do in the weeks to come.

“It’s early in the season and we’re not going to throw anyone out early,” Charlebois said. “I have a lot of faith in our guys. We talk about short-term memory loss and how yesterday is history — tomorrow is a mystery and today is a gift. That’s why they call it the present.”