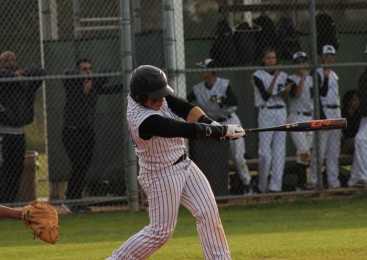 Everglades catcher Manny Rodriguez connects for an RBI triple in the bottom of the first inning.

Host Everglades got the 2016 started with a 5-0 shutout victory over Hollywood Hills on Wednesday afternoon. Gators senior right-hander Justin Carillo put in a dominant start to pick up his first win of the season, while giving new manager Jorge Julio his first career coaching victory. The Gators (1-0) took the lead with three runs in the bottom of the first and then their ace took care of the rest.

“I’m happy today,” Julio said. “The pitching was nice from our number one JC, and I think for us it helped a lot that the team is playing together. That is the number one most important thing for me right now. I’m happy for me too because it is my first game in varsity. I want to continue working for my guys and everything is going to happen in the end. I know we have to face a lot of good teams, so we’ll be ready.”

Carillo picked right up where he left off last season in going up against the young Spartans lineup. The senior scattered four walks but did not allow a hit, and he struck out 15 batters in six full innings. Even though he had the no-hitter going, when his pitch count got up the coaches chose to pull him from the game. Early on the ball was getting up in the zone, which led to some deeper counts before Carillo made the adjustments he needed to stay in complete control.

“That is what happens throughout a game, and you have to make some minor adjustments,” Carillo said. “I was making sure that front foot landed right and I was getting everything on top. You never want to start raising because that is when you start to get hit. It feels good to get this first win out of the way. Now we can look ahead and look at our opponents and figure out what we need to do.”

Alfredo Gonzalez came in to close out the final frame for Everglades, and he preserved the shutout while recording a strikeout. However, Spartans freshman second baseman George Hernandez was able to break up the no-hitter with a single through the left side on the team’s final out.

The Gators (1-0) jumped out with the lead for all the runs they would need in the bottom of the first. Victor Valentin drew a leadoff walk but was then erased on a fielder’s choice that put Jerry Alcantara on first. Alcantara broke on the first pitch for a stolen base and then easily scored when catcher Manny Rodriguez drove a shot to right-center field for an RBI triple. Eduardo Rodriguez reached on an error that plated courtesy-runner Vincent Desisto, and Bryan Ferreira followed with an RBI groundout that scored Eduardo Rodriguez. 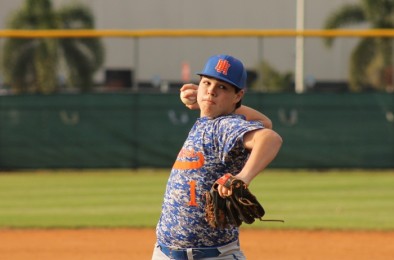 Jonathan Campbell had six strikeouts in four and two-third innings.

Pitching with the lead the rest of the way helped Carillo settle in. He struck out the side in each of the next three innings and, after issuing a one-out walk to Jonathan Campbell in the fifth, Carillo dove off the mound to snare a pop up off a bunt attempt. He then fired to first for the inning-ending double play.

“That’s key really and it is real important to be able to pitch with the lead,” Carillo agreed. “It allows you to settle down and focus on what you need to do rather than thinking how can you shut these guys out to keep the game close. When your offense helps you it is the best feeling in the world.”

The Gators struggled to get much offense going over the next few innings as the starter Campbell settled in on the hill. The sophomore mixed his pitches well and featured a nice knuckle curveball to deliver a quality start for his club. Campbell allowed three earned runs on four hits and two walks in four and two-third innings, and he struck out six.

Senior reliever Ralph Alvarez tossed the final inning and a third. He picked up three strikeouts by pounding the zone with 15 strikes on 19 pitches.

“We had a real good pitching performance from our starter and our closer did real good too,” Hollywood Hills manager Thomas Marante said. “The effort and hustle was what I was looking for. This is a very young team and what I was looking for was how well they could come into the game and manage it. We had a couple of mental mistake that gave them the lead but overall the pitching performance did very well.”

Although the team is so young, Marante liked what he saw from his guys Wednesday. With a few days to prepare for Coconut Creek they are hopeful this experience will help them focus on the right things in practice.

For Everglades, the offense will look to learn from the challenge they saw with the breaking pitches. Julio will work to teach them how to stay back on pitches, and Alex Gonzalez Sr. is also going to attend a practice and work on hitting with the players.