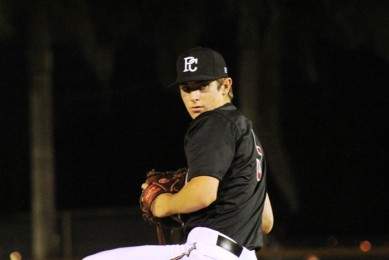 With only one starter back from last season’s roster, the Pembroke Pines Charter Jaguars are much younger and less experienced than they have been the past few seasons. Yet manager Carlos Iglesias knows his guys are ready for varsity baseball and he does not view them any differently than any of the clubs that have come before them.

This new bunch helped get the program off on the right track with an exciting 1-0 walk-off victory over University School on Tuesday night in the first HSBN Broward Game of the Week. After both teams were held scoreless by two dominant starting pitchers, Jorge Herrera got the ball in play to drive Anthony Mederos home for the win at Flamingo Park in Pembroke Pines.

Julian Barcelo got things going in the bottom of the seventh with a single through the left side. Mederos came on as a pinch-runner, and Isaac Valancy advanced him into scoring position with a perfect sacrifice bunt. Kyle Heim followed with a single to right to put runners on the corners and bring Herrera to the plate, and Herrera got the ball on the ground and reached on an error that allowed Mederos to cross the plate and end it.

The rest of the night belonged to the pitchers, as Jaguars starter Daniel Rivero and Sharks starter Jack Schmidt battled in a nice pitching duel. Both hurlers threw five scoreless innings while allowing very few base runners, but neither factored into the decision. Schmidt struck out eight while surrendering two hits and two walks, while Rivero fanned 10 and allowed two hits and a walk before turning it over to eventual winner Mason Feldman.

“We tip our caps to Rivero over there. He was very good and I don’t know how many arms we are going to see like that throughout the year,” Sharks manager Dan Rovetto said. “We competed in some at bats and got better as the game went along and that was the positive thing to see. I just feel like that is the type of arm in our district that we are going to have to beat, because they are going to be throwing like that. This is part of the reason why we scheduled this game early in the season was to get put into this type of atmosphere.”

Both sides came out with great energy and intensity from the onset, and they used that passion as fuel through each pitch and each play. Each manager spoke afterwards about that being a focal point for the teams this year, and no matter which side lost it was clearly not going to be for a lack of effort.

The Jaguars made several big plays in support of the pitchers, and catcher Isaac Valancy best exhibited the level of effort everyone was giving by hopping up, racing after and then diving out to nearly snag a high pop foul that no catcher should ever have a chance to make a play on. Rivero agreed that it made his job easier by having that sort of support from the guys behind him, and especially his backstop at the dish.

“He is my best friend, we hang out all the time and we have a great connection,” Rivero said of Valancy. “We always know how to laugh, and even when he comes out there to the mound we have a great laugh and then just go back there at it.”

The Jaguars got exactly what the team expected from their ace, and Iglesias got what he expected from all of the rest of them too. Although the rest of the players were making their first career starts, their skipper does not look at them and see them as anything other than the varsity players that they now are. 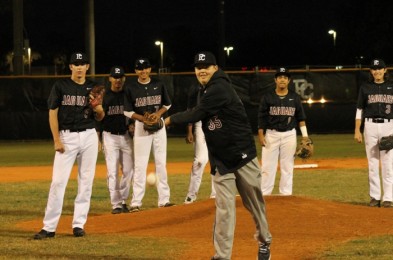 “It is all in how you prepare yourself and this team has done a great job to prepare for the season and to prepare for these type of games,” Iglesias said. “I don’t look as them as a young team and they are ready to play ball. We are a team that every time we step on the field we will be prepared to play.”

The Sharks responded well in a tough road environment and Rovetto admitted he was proud of them. With so many new players on the roster getting to know each other, he does not expect everything to go perfectly right away. Enough things were done right on Tuesday to let the team know which direction is the correct path for them.

“We’ve got four road games this week and we’re traveling down to the Keys later this week,” Rovetto said. “I am setting us up for some team-building and to put us into some types of environments that are going to prepare us for the future. That is what it is about.”