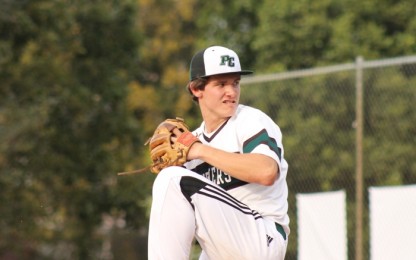 Sam Wurth struck out six in a complete-game 3-1 victory Tuesday.

Host Pine Crest got a smooth balance of production to earn a 3-1 victory over 5A District 14 rival Coral Springs Charter on Tuesday afternoon. Sam Wurth tossed a complete-game on the mound, Michael Rothenberg connected for a two-run home run that was the difference and the Pine Crest defense made several big plays throughout the day.

Pine Crest (3-0) secures an early lead in the district with a 2-0 record, having won the only two games played in 5A-14 thus far on the season. With four big road contests up next, it gives the club plenty of momentum heading into those challenges.

“It feels good, but we have a long way to go,” Pine Crest manager Mike Green said. “We realize our strength is going to be our pitching and our defense, and that is what got us through today. Sam was just lights out today and it was just a great performance by him.”

Coral Springs Charter came in determined to get the win that would turn the tables on this rivalry, but instead it dropped its fifth straight in the series. With a long full season still ahead there were plenty of positives that the players can build off of moving forward. The team knows it competes in a very tough district and the players came out of the gate showing they can hold their own against their rivals.

“I’ll never say I am happy with a loss, but for the first game of the year we did some good things,” Coral Springs Charter manager Mike Higgins said. “We are extremely young and we are playing a lot of sophomores and some juniors. We’ve got something to build on and it was a good competitive game.” 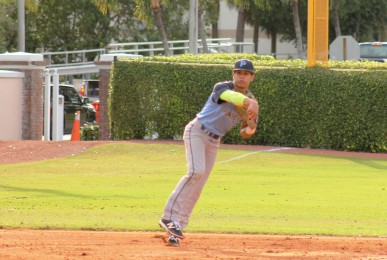 The turning point came in the top of the second inning. Coral Springs Charter starting pitcher James Doherty walked and gave way to courtesy-runner Bryce Sause and Greg Budden followed with a single into right field to threaten for the first time.

Wurth dug down and battled through three gritty at bats in a row to strike each hitter out and escape the threat unscathed. The veteran hurler and his backstop Rothenberg locked in with an impressive sequence of pitches to get the batters guessing. Wurth’s strong curveball finished off two-in-a-row before using the fastball to retire the last batter of the frame.

“Coach Green has put trust in us to call our own games,” Rothenberg said. “We’ve played baseball together since we were nine and I have caught him for about seven years now. We just know when we are both on the same page. He trusts me and I trust him.”

From that point on Wurth settled in and attacked the zone to pave his way to the complete-game victory. He scattered four hits and finished with six strikeouts as 61 of his 78 pitches found the strike zone. Even when James Dougherty clubbed a solo home run to center field to put Charter up 1-0 in the fourth, Wurth remained poised and confident and he maintained his groove.

“I think I was able to find my delivery and find my strike zone and it all just clicked then,” Wurth said about that pivotal second inning. “From that point I was just filling up the strike zone. We have a very veteran infield and they made a ton of plays today. They were aggressive early and that helped me get through a bunch of innings where I didn’t even have to throw many pitches at all. So a real big shout out to Charlie Luciano and Aram Leighton for making really big plays today.”

Michael Rothenberg connects for a single to lead off the fourth.

After falling behind Pine Crest responded right back to tie things up. Rothenberg lined a single up the middle but then courtesy-runner Shane Williams was erased on a fielder’s choice that put Cam Andres at first base. Leighton and Jake Kessinger both drew walks that chased Dougherty from the game when he reached his pitch limit. Charlie Luciano then worked an RBI walk to plate Andres.

An inning later Jordan Schulefand got things started with a double to center field, and Rothenberg got on top of a 1-0 offering and launched it over the right field fence for the two-run homer that was the difference.

“Jordan had just smacked the small and doubled and I was just trying to move him in,” Rothenberg said. “We had a tie ball game at the time so I knew a single did it. He threw me a ball up and in and I just pulled my hands in and spun it out to the outfield wall, and it got out.”