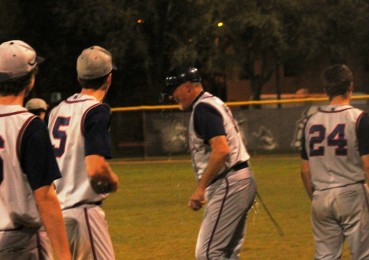 Mike Moss admitted that he cannot remember the final score of his first coaching victory over Watkins Glenn High in upstate New York, way back in 1985. But both he and the rest of the Chaminade-Madonna Lions will not soon forget win number 400, which came Wednesday night in a 10-3 district victory over host Hialeah Educational Academy at Hialeah’s Carl Slade Park.

The Lions (5-3) rode the strength of a five-run fourth inning to take control and end a two-game skid.

When it was over his team full of players who were not even born when he began his coaching career showered Moss with a Gatorade bath to kick off the celebration.

“It’s been a long journey, let’s put it that way,” Moss said. “None of these guys were even a twinkle in their dad’s eye then. It has been a long road, and I have been coaching here in Broward County for 27 years.”

Over the year Moss has made several different stops along the way. But being able to pick up this milestone victory with his beloved Chaminade-Madonna program is something he cherishes.

“My kids both graduated from Chaminade and my son played for me here, so obviously that and plus the fact that I’m back here on my second tour and these guys here are all my guys here, that all makes this very special,” Moss said. “These guys have all been with me since I’ve been back and to get the 400th win with them is awesome. I couldn’t be happier.”

The main thing Moss can remember from his first coaching win was that Edison’s Randy Starr was the pitcher who earned him that victory on that day. Wednesday evening’s starter, Michael Blanco, also delivered a memorable performance on his bookend of the story. The right-hander allowed one earned run on three hits and a walk in five full innings, recording seven strikeouts to earn his third win of the season.

Both sides traded runs in the first. Matt Johnson singled through the left side and then came all the way around thanks to an RBI triple from Rolando Petit. Emilio Ferrer got a leadoff single and later scored on an RBI single from Ricky Jimenez to even things up for the Bulldogs (2-7, 1-6). 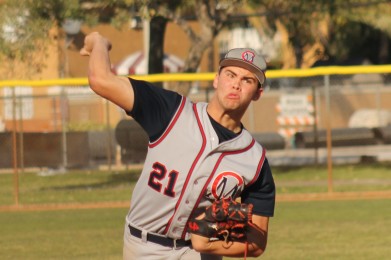 Michael Blanco struck out seven to earn the win.

Blanco picked off the lead runner to quickly seize back the momentum, a turning point that helped him get his feet under him. The Lions starter retired the next eight batters in a row and only allowed two more base runners over the next four scoreless frames.

“When that runner was on first I started to get a little worried,” Blanco said. “So when I picked him off that was really a momentum change for me. Then you don’t have to think about the pitch; you just throw the ball and it lands there.”

Bulldogs starter Raymond Perez also kept things quiet early on, before running into trouble in the fourth when the first four batters all singled to reach base. Kevin Rodriguez, Chris Schoeller and Roberto Petit all singled to load the bases, and Eric Bonkowksi lined a shot to deep left field to drive in a pair. Ruben Ramirez added an RBI groundout and Mike Drag later scored on an error to put Chaminade comfortably in control.

Wyatt Villello singled and was replaced by Nick Ramirez, who tallied his second run of the day on an RBI single from Matt Johnson in the sixth. Ruben Ramirez also came in to extend the lead, and the Lions closed it out with two more in the seventh after Bonkowski collected his third hit of the night to get things going again.

Bonkowski recalled how he did not have a good season last year, and how we was thinking about it too much at the plate. This year he is playing much more loose and is currently tied for the team lead in hits.

“I saw that there were a couple of RBIs on base so I was just looking to shoot it up the middle, because the infield was playing in,” Bonkowski said. “I did and it was right there and I put it in play. It felt good to get this win, and everyone was a part of it and everyone is working hard. We had two rough ones the past few games and we should have got to 400 a couple of games ago, but we made it happen.”

Not to be lost in the result is the fact that the Lions improve to 4-2 in 4A-7 to keep pace in a competitive race in this seven-team district.

“Halfway through we’re 4-2, and if we finish 8-4 in the district then I believe we’ll be in pretty good shape overall,” Moss said. “I don’t know what it’s going to take to win, but probably nine or ten wins. But we’ll be in the discussion anyhow.”