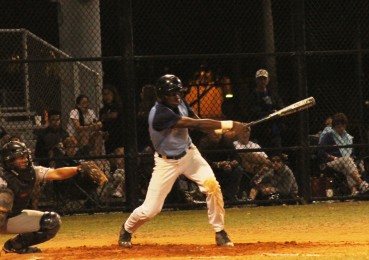 The Coral Springs Charter Panthers may have found just the spark they needed. Coming into the HSBN March Madness Shootout the Panthers were a #10 seed in the Black Bracket. Just five days later the Panthers are now the champions of their bracket, after an 11-7 win over South Miami completed a four-game streak that culminated in the championship celebration.

“We came alive this tournament and have won six out of seven games now,” Coral Springs Charter coach Charlie Magrann said. “We play in a very tough district and started 0-6, but we started playing well before the tournament and then really came alive and started swinging the bats with confidence. You see what happens now and we are looking forward to getting back into district play.”

Coral Springs Charter (6-7) rode the momentum of a monster second inning to take control early. The Panthers sent 14 batters to the plate in the second, scoring nine runs to take a 10-3 lead. The first four batters all reached and scored, which turned things over to the top of the order, where the bats heated up even more. Robert Robinson collected his second hit for an RBI single as part of a 3-for-5 performance, Zack Weber followed with an RBI single and Michael Perugini smacked an RBI triple.

The next three batters also reached base, before TJ Lopez and Joseph Rivera added RBI singles to keep the chain moving. The big inning erased a 3-1 deficit and put Coral Springs Charter in control with a big lead it never surrendered.

“We’re just feeling good as a team and we have momentum going,” Michael Perugini said. “We got a couple of good hits and after that we just got rolling. We had the momentum behind us and we just didn’t stop.”

The Cobras (7-10) also came into the Shootout looking for some momentum to jump-start the second half of their season. Despite being the #13 seed, South Miami also played its baseball of the year to earn its place i the finals. That heart and tenacity showed in the championship game, as players refused to quit and battled to the very last out. South Miami rallied for four runs in the last two frames to keep hope alive, as Leandro Lopez singled to score Aaron Cox and Deivis Jacomino followed with a triple that plated Cox and Johny Garcia.

“This tournament is unbelievable,” South Miami manager Howard Cuervos said. “We didn’t expect to be in the finals. But every game we played well, with no errors, we put the ball in play at the right moment and the starters threw strikes. That is why we are here right now. I feel so proud for the kids for coming back.” 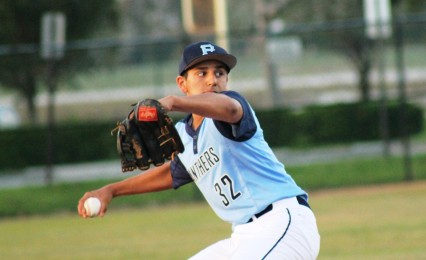 Alex Bueno earned the victory for the Panthers.

But the night clearly belong to the offense.

“Our first two guys, Robert Robinson and Shane Magrann, have been really stroking the ball all year,” Coach Magrann said. “Now we have John Budden, Zack Weber, Mike Perugini and James Doherty all coming through. Our top six or seven guys can be dangerous right now. We’re starting to swing the bats so they are all contributing now.”

Perugini also had a stellar day, going 2-for-3 with a double and a triple, while also reaching on an error and contributing a sac-fly that plated Robinson for the Panthers’ first run.

South Miami also takes a lot of confidence and momentum out of its Shootout performance. The Cobras pounded out 13 hits in the championship game and also made some aggressive plays in big moments on defense.

Like most teams from Miami-Dade, passion fuels the players in every moment spent on the field. That passion helped stake the Cobras to a 3-0 lead in the top of the first, as Kevin Capote had an RBI double that scored Leandro Lopez and Randy Garcia followed with a two-RBI single that brought in Jacomino and Capote.