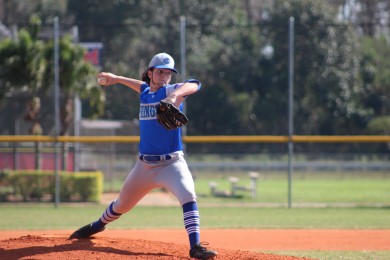 Phil Quinn took the mound for the Colts and struck out five Monarch Knights to earn the win.

The Coral Springs Colts traveled to Monarch on Tuesday afternoon as the teams faced off in a 9A-11 meeting. A strong defensive game led to few hits and dominance on the mound while some costly errors late in the game led Coral Springs to a 2-1 victory over Monarch.

The Colts found their opportunities to capitalize in the sixth inning when seniors Tyler Hall and Nelson Santiago crossed home plate to put the Colts up 2-1.

Junior catcher John Lombardi reached on an error that returned the energy to the stands and Santiago came in to run for him. Hall was hit by the next pitch and put on base, followed by costly errors that led them both to score and take a lead Coral Springs did not relinquish.

“We had Phil on the mound and he threw a great game today, gave up two hits and one run. I’d take that any day,” Manager Mike Federman said. “The kids are playing hard and coaches are coaching hard. The next game is the next game. We’re just trying to build upon today for the next game and move forward through the rest of the season.”

With five strikeouts Phil Quinn was dominant on the mound.

“That is the best I’ve felt all year,” Quinn said. “I went out there and threw strikes, let my defense do work and they’re really stepping up for me and making the plays. Lately at practice we’ve been working on fundamental baseball and it’s really paying off.”

The Knights took an early lead in the second when sophomore Dylan Davidson hit a lead off double to start the inning. Sophomore Diovanni Mateo capitalized on his efforts and bunted to move Davidson over to third. This started a short-lived momentum for the Knights as senior Jake Alten came up to the plate and hit a single with the only RBI of the game.

“We had to execute offensively as far as our bunting and we did that,” Knights manager Joe Franco said. “We took a 1-0 lead but making three or four errors in an inning, good teams are going to capitalize and that’s exactly what Coral Springs did. We just have to continue to practice and work hard. We have a young and inexperienced team this year and every inning that these guys are out there is gaining momentum and experience for the next play. So we just have to keep at it.”