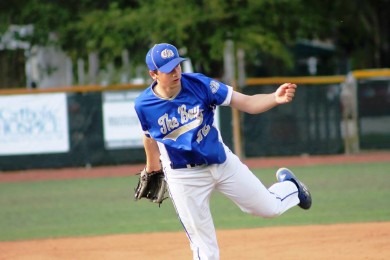 Close competition marked Silver Bracket play in Saturday’s opening round of the HSBN March Madness Shootout. Pine Crest and Brito scored upsets as they prevailed over their lower-seeded opponents.

#15 Miami Brito stunned #2 Western 4-3 with four runs in the top of the seventh to erase a two-run deficit. The Wildcats rallied for a run in the bottom of the seventh, but the Panthers (8-4) held them back to win.

Brito advances to play the winner of Pompano Beach and The Master’s Academy, which was rained out Saturday.

Top-seeded Cypress Bay walked off on #16 Alonzo Mourning to win 3-2 in eight innings. Raul Quintero led off with a double, and Anthony Figueroa and Jose Natera singled to load the bases. Michael Moreno singled up the middle to score Quintero for the winning run.

Hector Lozada’s base hit brought in Carlos Salaverria in the second, and Quintero scored on a passed ball for a 2-0 lead for Cypress Bay (9-7) after three. The Sharks evened it with two runs in the top of the sixth. Marcel Guardarrama’s base hit brought in Jose Marquez, and Max Liff’s sacrifice fly scored Jim Varona.

#4 Coral Springs topped #13 Suncoast 9-7. Alexsi Pogrebnov went 3-for-3 with two RBIs, and Sean Baran went 2-for-4 with a run for the Colts (8-5). Springs built an 8-4 lead after three innings, but the Chargers came surging back for three runs in the top of the sixth to make it a one-run game. Springs tacked on an insurance run in the bottom of the inning. 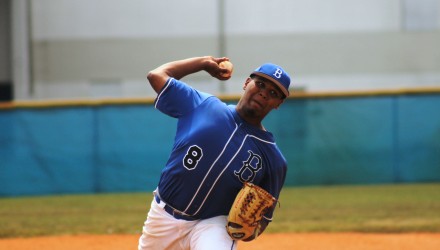 #6 Westminster Academy edged #11 Braddock 5-4 to move on to play the winner of Hialeah-Palm Beach Central, which also was rained out Saturday. The Lions (9-6) took a 5-0 lead after four innings. Christian Sosa scored on an error in the first and then singled to score Logan O’Neil before coming home on a wild pitch to give the Lions a 3-0 lead after two.

Westminster tacked on two runs in the fourth as Cory Acton lined a base hit into left to plate Alec Villanueva and Zach Warenius hit a sacrifice fly to bring home Felix Torres.

Down to their final outs, the Bulldogs rallied for four runs in the top of the seventh. Jesus Barraza was hit by a pitch, Miguel singled up the middle and Nelson Alvarez walked to load the bases. Marlon Gutierrez plated Barraza on a fielder’s choice RBI, and Jean Alvarez and Andres Pineiro reached on errors that added two more. Yandy Morales added an RBI single to pull within a run, before Westminster Academy finally finished the game off by recording the last out.