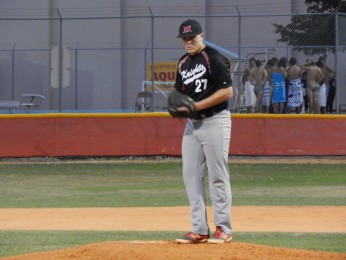 CJ Delbosque takes the mound for the Knights

The game Tuesday between the Monarch Knights and the Deerfield Beach Bucks was close early until the Knights pulled away late to get themselves a 10-3 win on the road. Monarch picked up its first win in 9A-11, improving to 1-3 in the district.

The top of the seventh had begun with a close score of 3-2 in favor of the Knights. But Monarch was able to get to the Bucks bullpen in the seventh to pull away to victory. A walk to John Benitez was quickly followed by an infield miscue. With Benitez on second and Nick Gutierrez on first, Rumpf put down a perfectly-executed bunt to advance the runners.

More small ball resulted in a nice delayed squeeze by Delbosque, an infield single by Joey Rugare and an infield miscue that plated additional runs. Dylan Davidson added a solid single for the Knights. Then, Brett Beuchert supplied another well-executed bunt and Ed Hammel lay down a great suicide squeeze for yet another run for the visiting Knights.

“Coming into this game, we had really been struggling,” Monarch manager Joe Franco said. “Our pitching was the only real consistent thing in our game. It was nice to see our offense step up today. Delbosque and Rumpf, two seniors we are really counting on, stepped up tonight. A little small ball and we were able to add some insurance.”

Deerfield starting pitcher Dalton Williams was able to keep the Knights at bay early in the game and didn’t run into any real scoring threats until the fourth inning. The Knights (3-4-1) struck for two runs in the third inning after a couple of base on balls to start the inning.

CJ Delbosque started for the visiting Knights and pitched into the fourth inning having allowed only two runs and with his team in a 2-2 tie. A fielders choice by Deerfield’s Conner Kelly resulted in the first run of the game, and the Bucks (3-8) added another run after another walk and a solid single to left field by Peter Robinson. 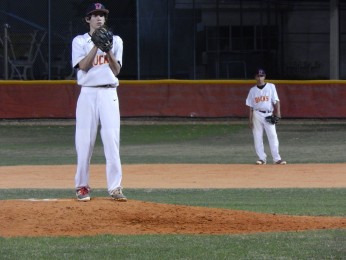 Dalton Williams got the start for Deerfield Beach.

The Bucks (3-8, 0-4) had been quiet with the bats also to start the game, as Delbosque was able to keep them in check through the first two innings. In the third inning, the Bucks were at last able to put some runs n the board. Consecutive walks to Keshawn Herring and Williams were followed by a fielders choice for the first run. Then another base on balls was quickly followed by a solid single to left by Peter Robinson to plate the second run of the inning for the host Bucks.

The Knights added a third run to their score in the sixth inning after Dylan Davidson hit a double to deep left field. Diovanni Mateo then stroked a solid single to left to plate another run and also advance to second on an infield miscue. But that was all the Knights were able to push across in the sixth.

“I hadn’t been hitting very well lately, so it was nice to add a couple of base hits to help my team tonight,” Matt Rumpf said. “My pitches were, for the most part, what I needed them to be tonight. My teammates added some runs and really helped ease the pressure at the end of the game.”