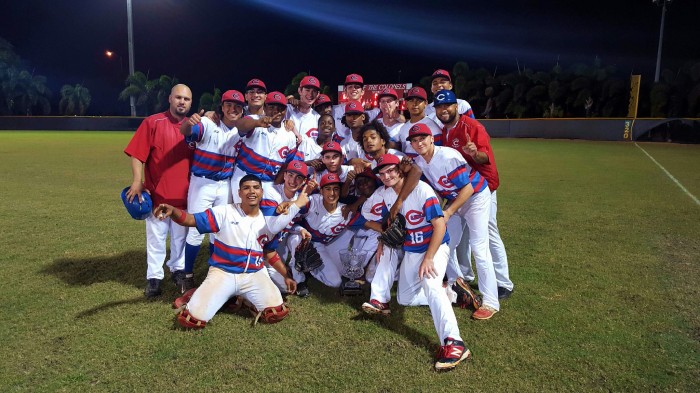 The Colonels celebrate after beating their cross-town rivals to win the Mayor’s Cup on Thursday.

Bragging rights were put on hold last year, as the annual contest for the “Mayor’s Cup” between the Plantation Colonels and the South Plantation Paladins was canceled due to rain.

This year, there was a lot more on the line when the two teams met. They are finally in the same district together and on Thursday night the Colonels kicked of the new era with a convincing 11-5 win against their cross-town rivals.

“We came together as one and swung the bats well in crucial moments,” said Aguilar. “We never gave up and brought the Mayor’s Cup back to Plantation as a family.”

In the early going, it looked as if the Paladins, who won the last contest back in 2014, were going to walk away on top once again. They batted around in the second inning and scored four runs to take a daunting lead.

Meanwhile, the Colonels did not record a hit through the first three innings. They broke through in a big way in the fourth though. Jeremy De La Cruz broke up South Plantation starter Zach Birchall’s no-no with a lead-off base hit, and three batters later Bailey Rodriguez bit into the lead by grounding a two-run double down the left field line. Ender Vargas followed suite with a double of his own to plate Rodriquez and the Colonels were off and running to an 11-batter, five-run inning.

After that, Plantation never looked back. Connor Jones came on in relief in the fourth for the Colonels and closed the game out, allowing one unearned run in the sixth. His offense gave him plenty of breathing room by adding four more runs in the fifth inning and Jones himself contributed to a two-run seventh by recording a lead-off knock and them coming around on Cristian Chavez’s third RBI of the night.