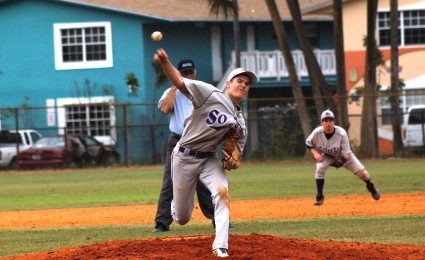 Coming off a game in which the club was no-hit by St. Thomas Aquinas on Tuesday, the South Plantation offense focused a lot of attention on hitting in the day leading up to Thursday’s road contest at Stranahan.

The hard work paid off as the Paladins clubbed out 13 hits and claimed a 10-4 win over the Dragons.

“We had extensive hitting yesterday. These guys worked hard yesterday so whoever we were facing, they came out swinging today,” South Plantation manager Trevor Chang-Leung said. “That was what we were trying to get these guys to do. I am teaching these guys that when the see a team like St. Thomas on the field they cannot just go off of reputation and feel a little timid like they did.”

The Dragons pitching staff may not invoke the same fear into opposing hitters as Kyle Benson and the St. Raiders did, but the freshmen duo of starting pitcher Chris Vaillant and catcher Edward Arnold did not make things easy for the South Plantation batters. Vaillant walked just one in three-and-a-third innings, even though many guys went deep into counts against him. Patience and plate discipline was rewarded in the end over and over with guys finding spots through the defense.

“We had a bad day hitting-wise against STA, so yesterday we took the whole practice and had six hitting stations and went through everything that we could do so we could hit today,” senior Ernine Osteen said. “No matter what the scoreboard said, we didn’t change anything today.”

The Paladins (3-3) scored in every inning to take a lead right away and then keep adding to it. Leadoff hitter Justin Ament dropped a single into shallow right field to immediately erase the stigma from the no-hit loss. The next three batters also reached, as Ivan Sola had an RBI single, Ernine Osteen singled and Tyler Hudson reached on a fielder’s choice. Osteen came home on an RBI single from Danny Alvarez and Hudson thanks to an RBI double from Brandon Schreiber. 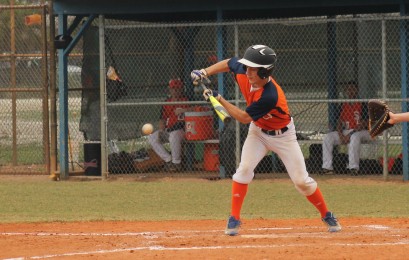 Jay Urbanik puts down a solid bunt for the Dragons.

Christopher Campi scored the first of his two runs and Ament tallied his second run for the difference in the top of the second. The offense kept grinding out at bats, fouling off pitches and working counts to put the ball in play. Every hitter reached base in some way, led by Osteen’s 3-for-4 day that was highlighted with an RBI double in the second.

“This win will will help us in our district game tomorrow against Fort Lauderdale,” Osteen said. “Hopefully we can keep the bats going for tomorrow.”

Luis Morel was 2-for-4 with an RBI and a run, Sola went 2-for-3 with two RBIs and Brandon Holifield had an RBI single and drew a pair of walks.

“I think our pitching is going to keep us in every game and I think we have enough guys to do that,” Chang-Leung said. “It depends on the offense. You can’t just depend on the leadoff guy getting on base and the three-hole guy hitting everybody in. If we hit I think we can compete with everybody.”

Stranahan also had a strong showing at the plate. The Dragons only struck out four times all day and the hitters battled at the plate deep into counts. Upon falling into a 3-0 hole before their first swings, the Dragons (1-5) answered right back with their first run. Christian Jaramillo was hit by a pitch, stole second and then came in on an RBI single to left from Jose Lopez.

Lopez added a sacrifice-fly RBI in a two-run third inning, sending home Jay Urbanik. Payton Marinelly singled up the middle, stole second and scored when Urbanik reached on an error to start the frame. Andy Vargas added an RBI to plate Tyrone Jackson in the fourth. 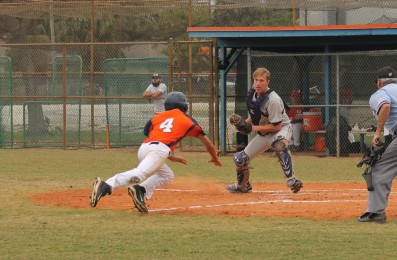 Stranahan’s Payton Marinelly dives and eventually scores ahead of the tag from South Plantation’s Brandon Holifield.

While the wins and losses may not reflect it yet, the Dragons are heading in the right direction. The defense played aggressively and the hitters consistently delivered quality at bats. Vaillant and Edwards supply a good young nucleus for the club to build around, and the future is on the field now.

“We always know that Stranahan is going to have that up-the-hill battle, but I’m very happy with some of the freshmen that I have,” Dragons manager Frank Vargas said. “We’re definitely scoring a lot more runs than we did last year, so that is already moving up in the right direction. right now they are more aggressive and they are learning how to just swing those bats. Everything will take care of itself after that.”