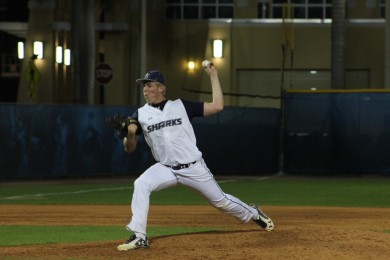 The Westminster Academy Lions traveled down to take on the University School Sharks Thursday night in a key 4A-7 battle at Nova Southeastern University. The Lions hit and took advantage of opportunities for the 6-4 win over the Sharks.

“University School is a really good team and I couldn’t have gotten this win without my teammates,” Lions junior starting pitcher Tommy Haggerty said.

Westminster got off to a slow start due to dominant pitching by Sharks junior lefty Jack Schmidt, who struck out six in just four innings on the mound and carried his team defensively.

“Defense really hurt us, but Schmidt did a great job tonight,” University manager Dan Rovetto said. “They had some good at bats, got the ball in play, and they competed against him, fouling a lot of balls off and getting his pitch count up there.”

The momentum for the Lions started in the fourth inning with sophomores Christian Sosa getting on base, and Corey Acton hitting a single. That led senior catcher Zach Warienus to lay down an awesome sacrifice bunt that moved the runners over and set up junior Ramon Ripoll for a two-RBI double. It was exciting to see after such dominant defense for the Sharks.

The fifth inning was led off by sophomore Zach Goberville, who hit a single and was moved over to second by sophomore Logan O’Neil’s sacrifice bunt. Goberville stole third on the next pitch and scored thanks to Sosa, who had a big double and then scored as well. 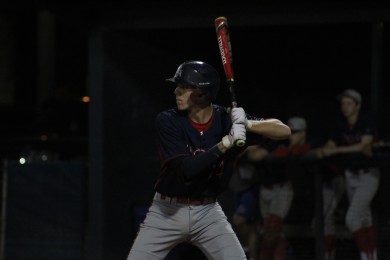 Sophomore Zach Goberville starts off the fifth inning with a single to right.

“We  played as a selfless team and kept it positive the whole game,” Sosa said.

Lions manager Nick James was happy with the adjustments his offense made.

“We didn’t really get anything going offensively the first three innings, but it’s a testament to our hitters of staying patient and making adjustments the second time through,” James said. “We were able to push a couple runs across and take advantage and that shows growth on our offense and that’s exciting to see. Danny is a great coach, always does a great job and his players are always well prepared. We knew it was going to be a really good ball game.”

Those innings were powerful for the Lions, but an exciting bottom of the seventh inning for the Sharks is what the game of baseball is really all about.  University School knew how to take advantage of every opportunity granted, as junior Andrew Grinberg got on base and senior Jake Kubiliun subbed in to get a big hit and score for the Sharks.

Junior Jonathan Miller’s RBI single and junior leadoff hitter Sammy Guillorme’s sacrifice RBI got all the home fans excited to see more. You could tell the will to win for the Sharks was never lost and that last inning really solidified the hope of coming back in the game right down to the finish.