Atlantic Claims The 8A-13 Crown Over Coral Glades 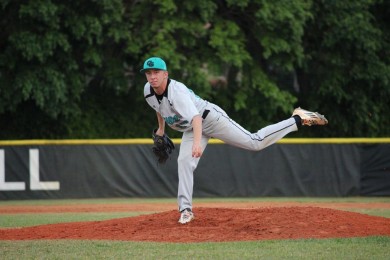 The Atlantic Eagles capped off a perfect season in 8A-13 by beating the Coral Glades Jaguars 5-1 on Wednesday evening, claiming the first-ever title in the newly-minted, three-team district in the process.

The Eagles had previously beaten the Jaguars 2-1 in a pitcher’s duel in February and again by a score of 7-0 in March, so this latest victory made it a hat trick against their new rivals. They also swept Spanish River, the third team in 8A-13, giving them a spotless 5-0 mark in the district’s inaugural season.

“It feels great,” said Atlantic manager Steve Wilson as he took in the win. “I feel great for the kids. My team has been working hard all year, as hard as any team I ever had, so for them to be able to come out as number one in the district is a huge deal. I’m really proud of them.”

Jake Eder took the hill for the Eagles and did so having tossed just 11 innings in 2016. He struck out 20 batters compared to just four walks in those 11 innings however, and Wednesday night saw more of the same from him. The left-handed fireballer, who hits the 90s on the radar gun, fanned seven and walked none through five innings, although he did hit a batter with a pitch in the first inning.

“He works as hard, if not harder, than any pitcher I’ve ever seen,” Wilson said about his junior lefty. “In tonight’s game, the thing I liked best about him was that when he got behind in the count he came back and got people out. He didn’t walk anybody, but I also liked that when people got on base, he shut them down. He’s a competitor and I’m glad we were able to get the win for him.”

Eder did all he needed to earn the win by only allowing three hits and one unearned run. He was at his best when the pressure was highest, notching critical strikeouts to end innings and strand runners in scoring position. He also was able to work some magic when the count was against him, particularly in the fifth inning when he recovered from seperate 2-0 and 3-0 holes to ultimately set both batters down on strikes.

The only run Eder gave up came in the first inning after the Jaguars star leadoff hitter, Alex Lara, reached on an error. Lara moved to second when the next batter was hit by a pitch but was almost stranded there as Eder sent the next two batters back to the bench on strikes. Steven Godoy blooped a ball to a dead spot between the mound and second base in the next at-bat for an infield single and the rushed throw to nab him at first went wild, allowing Lara to make it home from second base. 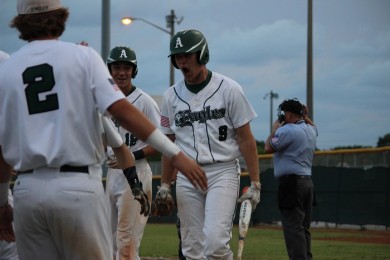 Duance Cyr celebrates with his teamates after taking the lead with a 2-run homer.

As good as a pitching performance may be, it is nothing without run support. Cyr and Cameron Hussing got the ball rolling in that department for the Eagles in the second inning. Hussing led off with a base hit and Cyr jacked a longball over the right field fence to give Atlantic a 2-1 lead.

Michael Pace, who went 3-for-3 on the night, and Duane’s little brother, Ryan, each recorded base hits in the inning as well, but were eventually stranded by Jaguars starter Preston Vegotsky.

The Eagles soared again in the fifth inning, scoring three runs to put the game away. Alex Cordes led off with a single into left-center, Justin Varisco was intentionally walked after a sacrifice bunt, and Hussing reached on the Jags only error of the night. Cordes scored on that same error and Max Charnin cleared the bases with a double into right field, but was nabbed trying to make it to third on the throw to home.

When asked to explain his team’s downfall, Coral Glades manager Mike Goulette was brief and to the point.

“We didn’t capitalize on their mistakes,” Goulette said. “They capitalized on ours. That was pretty much the difference.”

Despite the loss, the Jaguars can take solace in the fact that they are still bound for the regional tournament.

“Absolutely, it always helps,” Goulette said in reference to that fact. “You still get to play for another week. Hopefully you can correct some mistakes, come back and fight another day.”