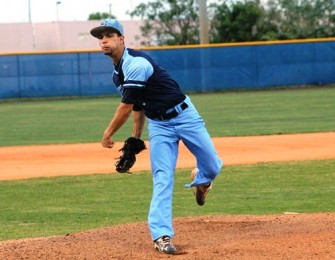 The Somerset Panthers have done nearly everything Manager Onel Garcia has asked of them in the 2016 season. Currently ranked #2 in Broward, the Panthers have put together the best season in school history, posting over 20 wins with just three losses. That all would mean very little, however, if the Panthers did not find a way to win their district semifinal game against Pine Crest on Wednesday evening.

Standing in the way between Somerset’s magical season and a regional berth was Pine Crest’s Jordan Schulefand. The Panthers ace gave Somerset all it could handle with a brilliant performance on the mound, but the Panthers found a way to scratch out one run. That was all their own ace, Mark Bejar, needed, as Somerset advanced with a gut-wrenching 1-0 win.

“I hate this playoff format,” said Somerset Manager Onel Garcia. “You win the top seed in the district, and then you still have a team that has a chance to take a shot at you and leave you out of regionals. I love, and I don’t love these games like tonight. That was one of the better pitching performances you will ever see between top-notch guys.”

The pitching battle was one of epic proportion, and one of the best in Broward this season. Schulefand and Bejar stood toe-to-toe, each taking turns painting corners and baffling hitters with an array of fastballs and off-speed pitches. It was a work of art, and one in which each pitcher seemed to out-do the other inning after inning.

The lone run of the game came in the fourth inning, when Somerset had three of it’s four hits on the night. A lead-off single by Kenny Moreno-Costa was quickly erased when Schulefand induced a 6-3 double play. Juan F. Teixera then hit a scorching ground ball down the line at third that went off third baseman Jake Kessinger and went for a double. Jose Varela followed that up with a double of his own, plating Teixera.

“He was throwing the ball so well, hitting corners, and keeping the ball down, ” Varela said. “I just went up there thinking I am going after the first good pitch I see, and it worked out.”

From there, all Somerset had to do was ride out the left arm of Bejar, who threw a complete-game, one-hitter with eight strikeouts. 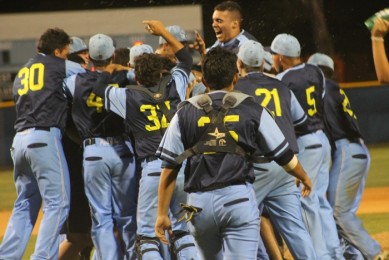 The Panthers celebrate a return trip to the district title game.

“Mark has been doing that for us all year,” said Garcia. “He’s been our ace all season, and he threw tonight just like he has thrown all year.”

For Pine Crest, a team of young talent, the focus will now move to next season. With Schulefand back again, the sky is the limit on where the team can go in 2017.

In the immediate future, however, it is Somerset moving on. The team played the game Wednesday night with as much emotion as passion as any club has shown this season. When asked how the guys all came together for this magical season, Varela answered quickly.

“Family,” he said. “We consider ourselves one big family. We all have each other’s backs every time we step on the field, and we know that one of us is going to come through each day. Today I was lucky enough for it to be me.”

Somerset now moves on to face Pompano Beach in the district finals, before moving on to the regional quarterfinals next Wednesday.