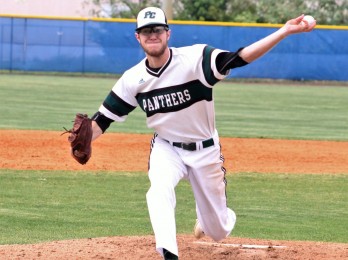 The Pine Crest, Coral Springs Charter matchup figured to be a pitcher’s duel between Garret Rukes and the Panthers’ James Doherty. That battle never did materialize, however, with Doherty leaving with an injury after throwing just six pitches. Although sophomore Jason Chandilall kept the Panthers close in relief, Pine Crest eventually pulled away with a nine-run fifth, winning 11-1 in five innings.

“We’ve been working on our offense, and we’ve been waiting for these guys to bust out like this, and it finally happened today,” said Pine Crest Manager Mike Green.

For much of the day, the Panthers had to rely on the left arm of Rukes. The senior went all five innings, allowing only two hits while striking out eight.

“He was pretty dominant,” said Green of Rukes’ performance.

The offense, which has been searching for its identity all season, woke up at just the right time in the fifth inning. Nick Pagano struck out to start the inning, but reached first when the ball got away from the Panthers catcher. Matt Rothenberg, Cameron Andres, and Jared De Faria then all singled.

Jake Kessinger was hit by a pitch, and Aram Leighton doubled. After the first out of the inning, Ryan Keenan added a hit of his own. When Pagano reached on an error in his second at-bat of the inning, the ninth run of the frame came across, ending the mercy-rule game. In all, the Panthers sent ten batters to the plate in the inning.

“Our offense had a real patient approach today,” said Rukes. “Getting those runs and ending the game early was huge for us, because that may give me the opportunity to come back and help us on the mound if needed later in the tournament.”

Later in the tournament could be as soon as Wednesday. The Panthers will be saddled with the task of facing the #2 team in Broward, Somerset Academy, in the district semifinals. While Somerset won both meetings, the two teams played an epic 1-0 game back in early March. On the mound that day for Pine Crest was Jordan Schulefand, and while it has not been announced, Schulefand could be on the hill again Wednesday night.

“We’re just going to come out and keep playing our baseball,” said Green. “We know Somerset is a good team, and we played them well during the regular season, so, we’re ready to do what we’ve got to do.”