Pompano Downs Gibbons 6-1 In 5A-14 Quarterfinal 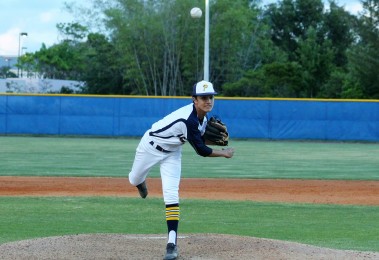 Trevor Kniskern went the distance for the Golden Tornadoes on the mound, and also contributed three hits.

Pompano Beach has been a team that has been getting better throughout the season. On Monday night, that growth as a team was on display as the Tornadoes defeated district rival Cardinal Gibbons 6-1 in a 5A-14 showdown.

The night started on rocky ground for the Golden Tornadoes, as the Chiefs’ offense looked sharp in the first inning off Pompano starter Trevor Kniskern. Gibbons had hits from Josh Shrouder, Joe Cerquozzi, Ty Crittenberger and Nico Rendina. Despite the four hits, Kniskern was able to avoid major damage, giving up only one run, with the help of a pickoff, a runner thrown out at third on a base hit and a strikeout to end the inning.

Early on, it looked like it could be a frustrating day for the Pompano offense as well. It loaded the bases in the first inning with nobody out. Two strikeouts, a walk to Austin Carney and a flyout later, and all Pompano had to show was a 1-1 tie.

The game then stayed like that until the bottom of the fourth. Mike Schuler led off with a walk. After a groundout, Jeremy Davis singled home Schuler, giving the Tornadoes a 2-1 lead. After a strikeout, Vinnie Costello singled, and scored on a Kniskern double. Suddenly Pompano had a 4-1 lead.

The Tornadoes tacked on another two runs in the sixth, and that turned out to be all Kniskern needed.

The game was a scary one coming in for Pompano, who had split the season series with Gibbons. Despite their 6-18 record, Tornadoes manager Joe Giummule knew the Chiefs would present a challenge.

“You can throw the records out at playoff time,” said Giummule. “We knew they were well coached and that they were much better than their record indicated.”

Now that Pompano has survived the quarterfinals, it has the tough task of facing the district’s second-seeded team, North Broward Prep, who is rested and will have its ace on the mound. North Broward prep has won both regular season meetings, but Giummule is excited about the challenge.

“I’m proud of the team and especially happy for the seniors who got to experience moving on in the district tournament,” said Giummule. “The program took a step in the right direction tonight. A win on Wednesday, however, sets us up for achieving our main goal, winning a district championship.”