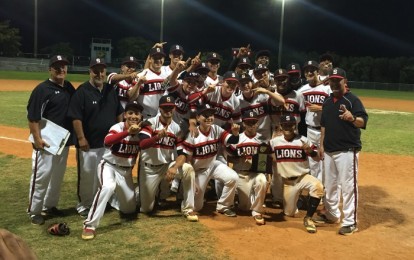 The Lions are 3A-7 champions.

There are exciting plays in baseball, and then there are the kind of exciting plays that last a lifetime. On Thursday night, Stefan Revelo delivered one of those once-in-a-lifetime plays. With a see-saw affair coming down to the wire, and the score tied at two, Revelo stole home in the bottom of the sixth, and then Sagemont held on to defeat Archbishop Carroll 3-2 in the 3A-8 title game.

Revelo finished the day 2-for-3, with a run and an RBI, the type performance first-year Sagemont manager Ricky Gutierrez has become accustomed to seeing from Revelo.

“He has been our heart and soul of this team,” said a jubilant Gutierrez. “Without him this district title could not be possible.”

The game did not start out great for Sagemont starter Albert Hernandez. Rey Gonce hit a one-out single. Jonathan Leon and Salvatore Lorenzo also both singled in the inning, and the Bulldogs had an early 1-0 lead.

From there, Hernandez settled down, allowing only one other run, in the third inning. The eighth-grader threw a complete game, picking up the district-title win.

“Albert’s performance today was unbelievable,” said Gutierrez. “He is going to be a special high school player that people will fill the seats to watch.”

Sagemont’s offense did not keep Hernandez behind for long. In the bottom of the first, they answered the Bulldogs’ runs with two of their own. MC Sagaro led off with a walk. After Hernandez flew out, Sammy Hernandez doubled to right. Sagaro then tied the game when he scored on a wild pitch. Revelo followed with a base hit, giving the Lions a 2-1 lead.

In the third, Archbishop Carroll tied the game, and the game stayed that way until the sixth. 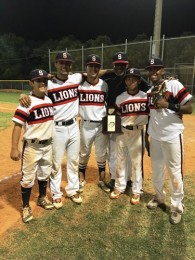 Eighth-graders have helped lead the way for Sagemont.

Revelo led off the inning with an infield hit, and advanced to second on an error. He then moved to third on a wild pitch, setting up his steal of home.

In the seventh, Hernandez was able to work around a one-out double off the bat of Lizandro Echemendia, to complete the 3-2 win.

With a team loaded with eighth-graders, Gutierrez is happy with how far the team has come in one year.

“This is a great accomplishment,” Gutierrez said. “Being this is my first year with these kids, we have been working hard all year. Our first goal was to win the district, and we accomplished that today.”

Of course, the young Lions may have been wise to follow the advice of the former major league shortstop who has had plenty of success managing at the high school level. Gutierrez led his alma-mater, American, to a state title just two seasons ago, and now he has a chance to do something not many managers have done, win a state title managing two different schools.

Before that can become a reality, Sagemont must navigate their way through Class 3A Region Three play. Their first stop wil be the regional semifinals, where they will face Jupiter Christian, and one of the top pitchers in South Florida in Nik Constantakos. The Lions will be playing on their home field for that game, which will take place Thursday at 4:00 PM in Weston.