The Lions Den: Sagemont One Win From Fort Myers 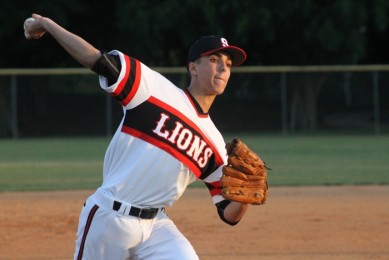 Niko Leontarakis picked up the win for the Lions.

When veteran skipper Ricky Gutierrez took over the Sagemont program last fall, he understood that his role would be to develop a largely talented young group, many of which are eighth-graders. What the baseball world did not know at that time, however, was that Gutierrez was bringing a championship pedigree with him from American.

On Thursday night, the Lions and Gutierrez continued their run through the 3A playoffs, this time taking down one of Palm Beach’s best arms in Nik Constantakos and Jupiter Christian, 4-3.

Learning is exactly what one would expect from a group that includes four starting eighth-graders. Their learning curve, however, is being sped up by this most improbable of playoff runs.

Sagemont, now one game from a trip to Fort Myers, will go on the road next Tuesday to face John Carroll in the 3A regional final. Game time will be 7:00 PM.

“We just go out and play,” said eighth-grader Sammy Infante, who was a catalyst for the offense with two perfectly executed bunts. “We know we are young, but that doesn’t mean we can’t win now. This is something you dream about when you are growing up, playing high school baseball, and going after a state championship.”

The youth showing in his words, Infante and his young teammates luckily had a veteran presence on the mound in this one. Senior Niko Leontarakis started the game for the Lions, and threw five innings, allowing six hits and two earned runs, while striking out eight.

“Niko didn’t have his best stuff today,” said Gutierrez. “But he was able to fight through it and work out of jams. He did what he had to do to put us in a position to win the game.”

Opposing Leontarakis was Eagles ace Constantakos, who had been virtually unhittable throughout his Eagles career. The same was said on Thursday, when he had 12 strikeouts.

The Lions were able to put some pressure on in the first inning when lead-off hitter MC Sagaro was hit by a pitch to open the game. Albert Hernandez walked and Infante had a bunt single, loading the bases with no outs.

It looked like Constantakos may work out of the jam after striking out the next two Lions hitters, but Pedro Martinez got Sagemont on the board with a two-out single. The Lions added another on a wild pitch, and suddenly held a 3-0 lead.

“Getting those runs early was huge,” said Leontarakis. “You don’t expect to have a lead like that against a top pitcher like him. That allowed us to settle down and play our game the rest of the way.”

And that the Lions did, keeping the base-running pressure on every time they had guys reach base, a strategy they had spoke about before the game.

“Absolutely,” said Gutierrez, when asked if being aggressive and playing small ball was their plan. “I think any time you are facing a guy like that, and I think he is one of the top pitchers I have seen in all my time coaching, then you have to try everything you can to score when you get guys on base.” 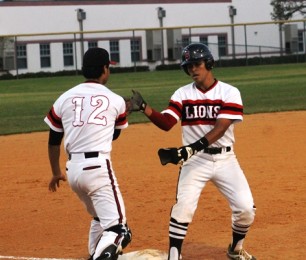 Sagemont players celebrate one of their four hits on the night.

In the seventh, a one-out double by Constantakos put the tying run on second, but another Lions young gun, Hernandez, induced a flyout, and closed the game out with a strikeout.

For the Eagles, it was the end of the best season in school history.

“What I am proud of most tonight is how these guys fought,” said Eagles manager Mike Lord. “They could have folded when they went down 3-0, but they kept battling, and we had several situations where one hit, or one play ends up differently defensively, and we could have been moving on. It was a great team to coach, and tonight they showed a lot of heart.”