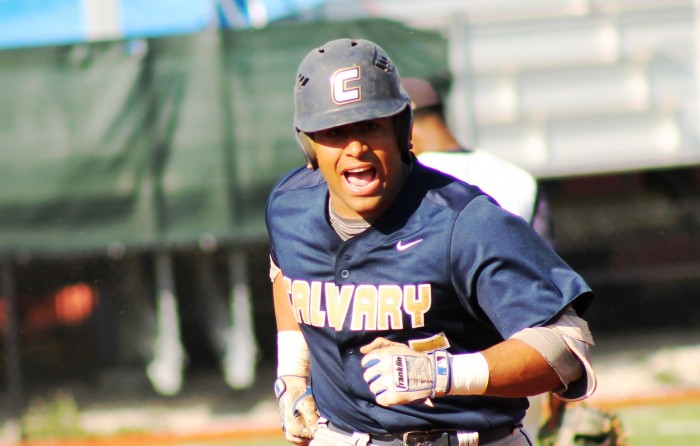 Calvary Christian manager Alan Kunkel marveled at all of the guys that have helped contribute to this historic season. Upon defeating SLAM Academy 6-5 in the 4A regional championship Thursday afternoon at Gibson Park, the Eagles advance to the state Final Four for the first time in program history. The first-year Eagles skipper beamed with pride for a group of players that all came together to do everything asked of them.

“Words can’t describe how I feel right now to take a really inexperienced team and gel them together, and for them to create the chemistry and unity that they’ve created and believe in each other,” Kunkel said. “This is a team that is resilient and they don’t quit. I don’t know that they understand the magnitude of the moment, so they just keep playing.”

Despite falling behind by three runs early on, the Eagles battled back to stay in the fight before a big fifth inning propelled them in front. Calvary (19-9) got on the scoreboard in the fourth when catcher Max Guzman walked and gave way to courtesy-runner Peter Carciopollo, who scored thanks to an RBI double from Tommy Orr. Victor Pimental was hit by a pitch and scored off a sac-fly RBI from Luis Ezra to pull the Eagles within 3-2.

An inning later the offense stole the momentum for good. Daley Weppner singled to right field and George De La Fe walked in the fifth, and Guzman jumped on the first pitch and slugged it deep to center field for a three-run home run.

“My approach was that if I got that fastball I had to hit it far and let’s take the lead,” Guzman said. “I was in my zone and I was ready to hit that ball. He left it right in the zone and he paid for it.”

Calvary now had the lead and a burst of excitement. That energy only magnified when Victor Pimental followed it up by connecting deep to left field for back-to-back home runs and a 6-3 lead.

“I knew Victor was going to come through, and he has done it a bunch of times this year where I hit a home run and he came around and hit one too,” Guzman said. “So I had a good feeling it was going to happen and right off the bat I knew that ball was gone for Victor too.”

Pimental’s solo shot ended up being the difference, after SLAM’s Jose Garcia connected for a two-run blast in the bottom of the fifth.

“God blessed me with that opportunity to come back and hit right after Max and I was able to capitalize on a mistake and make them pay,” Pimental said. “Just knowing that hit was the difference in the game is an amazing feeling. I get goosebumps just thinking about it. Knowing I am hitting behind one of the best hitters in the country, I just take notes and learn from him. When he doesn’t capitalize, I try to make it happen.”

In this case, both sluggers came through in an offensive battle with a SLAM club that hits as well as any and that had not lost at home all season long with a perfect 14-0 record at Gibson Park. The Titans (20-9) had nine hits and several big innings. 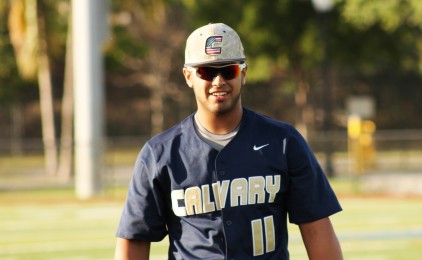 After chasing sophomore starter Christian Scott in the bottom of the fifth, SLAM found less success against left-handed reliever Noah Yager. The senior southpaw recorded the final eight outs to earn the save and preserve the victory for Scott. After allowing a single up the middle to Yoel Quintana, Yager allowed just one more base runner the rest of the way, while striking out three.

“Noah Yager has done a tremendous job of gaining confidence, working on his craft, getting better and preparing for that moment,” Kunkel said. “Christian Scott has really led us on the mound in many ways this year as a sophomore, but he just didn’t have his good stuff today. He competed and he got us in the dugout when he needed to and Noah was able to come in and slam the door. We couldn’t be more proud.”

Kunkel also recognized Brett Lawson and Ben Rozenblum as other key contributors, noting that they needed a grand slam home run from a freshman in order to advance past Florida Christian in the regional semifinals. The club has magic working for them right now, on a journey that next stops at jetBlue Park in Fort Myers in next Friday’s 4A state semifinal against Berkeley Prep.

“I give those guys credit,” SLAM manager Alfonso Otero said. “We were undefeated at home and we beat them a few weeks ago in the district title game. They threw their best guy at us and we hit him pretty hard. The lefty held us down there, and just credit to Alan Kunkel and his guy. They were one swing better offensively, one pitch play better than us and one defensive play better than us. That’s just the way the ball rolls and we wish them the best luck at states.”