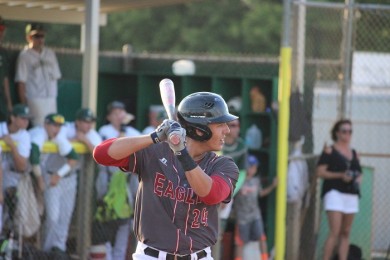 Colton Welker walloped a monster home run in the sixth.

Winning district titles has never been an issue for the Douglas Eagles. They’ve done that in each of the past four years and in 11 of the last 16 seasons.

The problem for the Eagles has been taking the next step in the regional tournament. They were sent home early in each of the past four seasons, the first two times by Flanagan and then the past two years by Park Vista. This season, the Jupiter Warriors cleared the Park Vista obstacle from Douglas’s path and the Eagles repaid the favor by traveling to Jupiter on Tuesday night and handing the Warriors a 2-1 loss in the regional finals, earning the first trip to states in school history in the process.

“I’ve never felt anything like this before,” said Eagles’ star senior John McKenna. “After all the hard work and effort put in through the whole season, and last year too, to finally make it over the hump, words can’t describe it.”

Played in front of a packed house that included a loud and loyal contingent of the Eagles’ fans that made the the long trip to the northern reaches of Palm Beach County, the game was everything a baseball fan could hope for: a high stakes affair that featured big-time players making game-changing plays that decided the fate of their seasons.

For the Eagles, there was no player bigger than senior shortstop Colton Welker, who recorded Broward County’s second highest batting average (.506) through the season and placed fourth in runs scored and long balls. On Tuesday night, he brought his best when it mattered most, collecting two of Douglas’s three hits, the second of those being a no-doubt shot over the left field fence that broke a 1-1 tie in the sixth inning and proved to be the deciding factor in the game.

“I was behind in the count all day and finally got into a hitter’s count,” Welker said. “I knew right away that it was one of the best swings that I’ve had in a long time.”

While Welker’s homer was the final and most heroic of them, the game was full of clutch plays and performances on both sides.

Jupiter’s Anthony Servideo was a proverbial vacuum at shortstop, sucking up any ball that was hit left of second base, including a couple of gems that would make any pitcher smile. In the second he dove to his left and snared a line drive while fully extended in mid-air. In the sixth he ranged all the way to the second base bag to scoop up a ground ball, then fired a strike to first from his knees. He also initiated a double play in the seventh and throughout the night played a part in over a third of Douglas’ 21 outs.

Servideo’s pitcher, Warriors ace Zac Sprankle, also rose to the occasion. Sprankle finessed his way through a Douglas lineup that hit a collective .314 on the season, using off-speed offerings and locating breaking balls to induce weak contact and ground balls, while keeping the Eagles off the bases and without a hit through the first three innings. 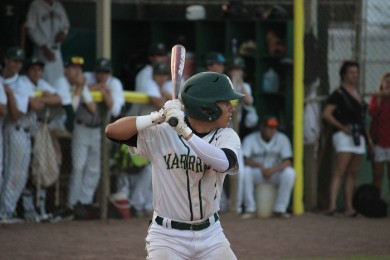 Ramon Machado stole home for the Warriors only run.

On the other side, star lefty Brandon Kaminer took the hill for the Eagles and got similar results through a different approach. He allowed a hit in each of his first three innings, two of which were seeing-eye singles, but otherwise overpowered his opponents, fanning two each in the first three frames and a total of nine on the night. Kaminer went the distance, allowing one run on four hits while earning the win.

“I just went out there like it was any other game,” Kaminer said. “I had the same mindset and just wanted to get the job done for my team.”

The only run Kaminer allowed came in the third inning. Ramon Machado ripped a line-drive into left field for a one-out single, then moved to third on a passed ball and a groundout. Brandyn Ward later walked to put runners on the corners and, down to his last strike of the inning, Jupiter manager Andy Mook put the running game to work for him. Ward broke early for second and purposely got himself caught in a rundown, hoping to give Machado the opportunity to steal home. The Eagles were wise to the trickery but Machado was still able to slide in under the tag to give the Warriors a 1-0 lead.

The Eagles pulled even in the fourth thanks to Josh Miaskowski and their other big-time bat, McKenna, who finished third in Broward in home runs and RBIs. Miaskowski began the frame by battling through an eight-pitch walk. Brady Norris and Welker followed with a pair of base hits to load the bases with none out. After a strikeout, McKenna stepped up and, on a 2-2 pitch, came within feet of breaking the game open with a grand slam. Instead, he had to settle for a sacrifice fly as the ball petered out in the wind and was caught on the right field warning track.

“It was a 2-2 count up and away and I just went with it,” said McKenna. “I thought it was going to go off the fence or over but the wind kept it in. I came up with the big RBI though. I did my job. I hit the ball hard and contributed the best I could.”

After that fourth inning hiccup, Sprankle settled back in breezed through five more outs before Welker dealt the final blow in the sixth.

“I told my guys, ‘We left everything out on the field. You can’t say you failed’,” Jupiter manager Andy Mook said. “Unfortunately, you have a winner and a loser and that’s how baseball is.”

After starting the season 4-6, the Warriors battled back to win their first district title since 2011. They had won 10 straight games prior to Tuesday night. 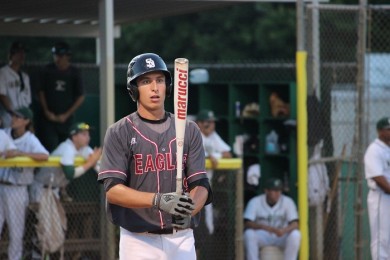 John McKenna tied the game with a sac fly that was feet away from becoming a grand slam.

“These guys really put it all together,” continued Mook. “We were able to make a good run and they deserve everything. They fought and worked hard it was a just a bad break.”

While the Eagles will take a moment to celebrate making history, their manager, Todd Fitz-Gerald, knows there is still work to be done as they prepare for the trip to jetBlue Park.

“We’ve been right on the edge for three years,” said Fitz-Gerald. “We just found a way tonight. These kids have been so resilient. They’re determined and they’re not going to let anything stand in their way. The journey’s not done. We still have two more to play, hopefully, and the goal is to be a state champion.”