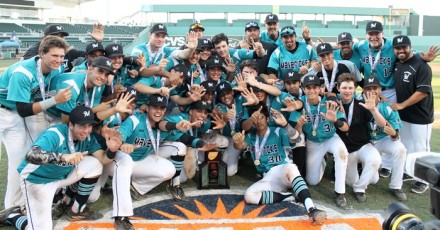 The journey in pursuit of a state championship is something the Archbishop McCarthy baseball team never tires of. From the first day of conditioning through to the final out of a state championship game and the ceremonial dogpile at the end, the motivation to get there again and again and experience it together with a new cast of characters is fuel that never runs dry.

Thursday evening the current cast ended just like so many before it over the past seven years, with a picture-perfect team dogpile following a state championship victory. Behind an offensive onslaught and an impressive relief performance from senior Austin Genao, the Mavericks claimed the 6A state championship with a 10-4 victory over Mosley at jetBlue Park in Fort Myers. It is the second straight title for the program and it’s sixth overall in the last seven years.

While most of the players on the team have now won multiple championships with the club, the motivation to share such moments with the new guys that hadn’t yet was the same driving factor that pushed them.

“This is the best feeling in the world,” said junior Joe Perez, who was 2-for-3 with three RBIs to do his part and earn a state ring for the first time as one of the newcomers to the program this season. “I haven’t had an experience like this before in my life. To come into this team and them with open arms is amazing. They gave me an opportunity to get this and play the best baseball we can play.”

The Mavericks went right to work with their first swings in the top of the first. Kobe Lopez rolled a lead-off single up the middle and moved to second thanks to a sacrifice bunt from Alex Carballo. Kobe then stole third base as Alex Toral drew a walk to put runners on the corners, and Perez sent Kobe the final 90 feet on a sac-fly RBI to right field.

Mosley answered back to tie it up in the bottom of the first. Three consecutive singles against Mavericks starter Johnny Leone loaded the bases, and Sean Maddox delivered a sac-fly RBI that drove in Michael Cullen.

McCarthy countered back to retake the lead in the second. Adan Fernandez singled to center field and was replaced on the bases by Mark Diaz, who perfectly executed a hit-and-run to go from first to third on a base hit to right field from Andrew Fernandez.

AJ Hendricks then delivered a liner into left field for a sac-fly RBI that plated Diaz and put McCarthy back up with a 2-1 lead.

When Mosley again threatened in the bottom half of the second, the Mavericks went to the bullpen for Genao. All year long the senior was thrust into unenviable situations and every team Genao came through and got the job done. Thursday’s outing proved to be the icing on the cake to his Mavericks’ career, as he went the rest of the way to shut down the Dolphins and pave the way to victory.

“It’s been a ride all season and I want to go out there and give my team the best chance to win,” Genao said. “I went out to the pen early, getting my mind ready. I thought Johnny would do great, but he said on the side that he supported the team. I went out there and I did my job that I had to do to just throw strikes and let my defense work and let our bats work. I believed in each and every one of our players, and they are my brothers and we had one goal on the same mind. I just gave the team the best chance to reach that goal.”

The Mavericks pride themselves on defense, and in nearly every game the offense does not get rolling until after a big defensive play creates the spark. Facing a bases-loaded jam in the second inning, McCarthy turned a 6-4-3 double play to end the threat and light the flint. In typical fashion, the Mavericks then opened the game up with their next swings.

Just as he has all year long, Carballo got things going with a double deep to center field. Toral worked a walk and then they both pulled off a double steal that set Ubaldo Lopez up for an RBI single up the middle. Toral came in on a throwing error on a pickoff attempt and Ubaldo scored when Adan Fernandez rolled an RBI single up the middle to give McCarthy a 5-1 advantage. 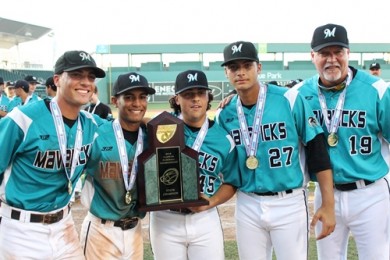 After opening things up in the third, the Mavericks pulled away with a four-fun fourth. Kobe singled to left field and Carballo and Toral both walked to load the bases. Perez lined an RBI single into center and Ubaldo followed with a liner into the left field corner that plated two more.

Adan Fernandez then singled to left field to drive in pinch-runner Colin Bertsch to push it to a 9-1 lead.

Joe Perez chipped in an RBI double in the fifth to drive in Carballo and extend the lead. Those insurance runs proved important to keep McCarthy in control, especially after Mosley scored three runs in the bottom of the fifth to make it 10-4 with two innings to go.

For Bielski, Thursday brought his eighth state title as a coach, as he also won twice with Hialeah High earlier in his coaching career. The Mavericks’ skipper does not focus on the individual accolades, and he understands that what he has enjoyed as a manager has not all been solely on his own.

“It’s in no way a one-man show. I have the greatest assistants a coach could ever ask for and they make me look good,” Bielski said. “They work tirelessly on the little things of the game. The unselfishness that those guys show and not only knowing the craft but sharing it with our younger players gives all of us as players and coaches the confidence that we can go out and get better throughout the season.”