Written by Anthony Uttariello on May 4th, 2016 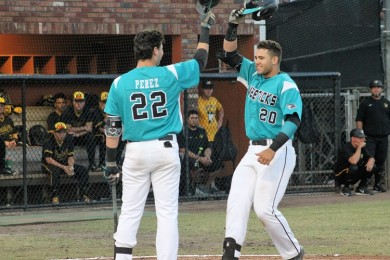 At this time of year, experience means everything in the regional playoffs. Teams that have been there and won have a tendency to find the magic when they need it most. That was the case Tuesday night when Archbishop McCarthy flexed its muscles, both literally and figuratively, in defeating district champion American Heritage 4-3. It was the second straight season the Mavericks lost the district title to the Patriots, and then came back to win the regional semifinal.

The McCarthy offense came out aggressive, scoring two runs in the first, highlighted by a Joe Perez two-run home run. The blast was one of three on the night for the Mavericks. Alex Toral hit a two-run shot in the third, and Kobe Lopez launched a solo blast in the fifth.

“That is the difference in the two teams,” said Heritage Manager Bruce Aven. “They have guys throughout the lineup that can hit the ball out of the park. We are more of a team that hits for average and has to manufacture runs. Sometimes its one or two little things defensively, or on the bases, and one or two key hits that make the difference. Those guys win championships for a reason, but I am proud of the season that my guys had, and for how they battled tonight.”

Those championships Aven spoke of include five state titles in the last six years, and seven straight regional finals appearances. It is a run of success that no other school in Broward history can match, and the Mavericks had the look of a team Tuesday that does not expect that run to end anytime soon. 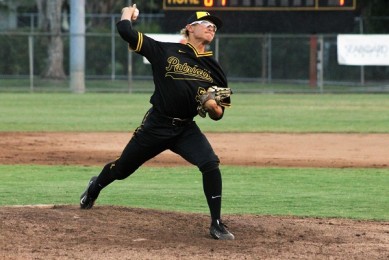 “We know what’s at stake when we get to this point, and we have full confidence in everyone in the lineup and on the mound,” said Toral, who had been frustrated of late at the plate, but who broke out in a big way in the regional semifinal. “Our pitching did tonight what they’ve done all year long, and our offense is getting hot. We take nothing for granted. That was a great team we played tonight. They deserve a lot of credit.”

The three home runs McCarthy hit accounted for all four runs they scored. Like a well-oiled machine, the pitching staff did its job as well. Freshman Yordani Carmona went the first 3.2 innings, and then turned the ball over to Austin Genao, who took the Mavericks through the middle innings.

“My job was to just do what I’ve done all season long,” said Genao. “I know my role, and I also know the guys that pitch before me and after me will get the job done. We are a staff, and everyone has a role.”

Carmona’s role was to get the Mavericks through the early part of the game, and Genao, the middle, but it was Joe Perez that was saddled with the task of shutting down a gritty Heritage offense in the seventh.

With the score 4-1, Kyle Carter led off the seventh for the Patriots with a home run, cutting the lead to two. After a strikeout, Tristan Casas doubled to right-center, setting up one last attempt at a comeback for Heritage.

Enter Perez. The Mavs closer was summoned. With over 500 spectators looking on, Perez induced a groundout for the second out of the inning. Santiago Garavito then walked, putting the tying runs on base, and when Jacob Pino followed with an infield single, scoring Casas, the tying run moved to second. 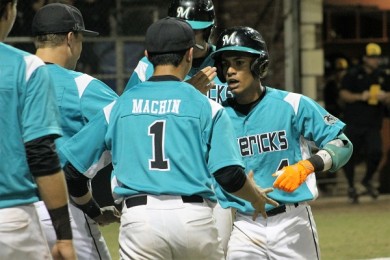 Perez then broke out the nasty, throwing two straight breaking balls for strikes, and closing the game with a called third strike looking. It was another performance the Mavericks have become accustomed to in 2016.

“That is the way all three of those guys have been throwing all year,” said McCarthy manager Rich Bielski. “Yordani has been great, Austin has done the job all year, and Joe came up with some big pitches there at the end.”

The Mavericks now find themselves in a position to play the waiting game. The other 6A semifinal, featuring Port St. Lucie at Rockledge, was rained out Tuesday, and will be played Wednesday evening at Rockledge. That will give the Mavericks an opportunity to scout their next opponent.

“We played Port St. Lucie a few years ago in one of our state runs, and we know they always have a good team,” said Bielski. “And Rockledge, we know they are strong as well. Facing a great Heritage team, we don’t allow ourselves to look ahead, so we haven’t thought much about it. But whoever it is, we know it will be a challenge.”