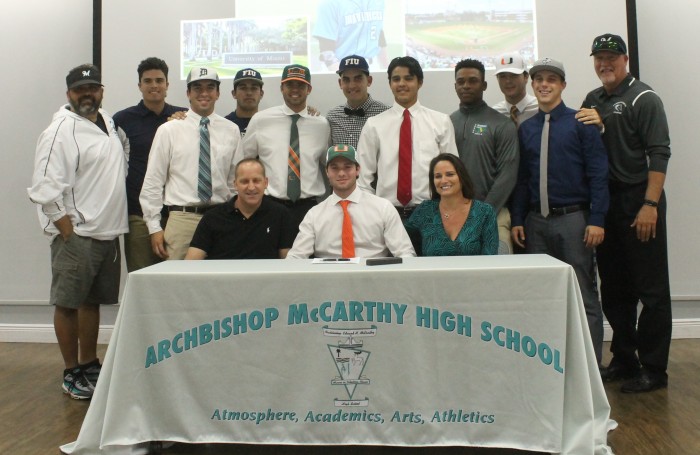 Coral Springs Charter senior Robert Robinson has never forgetten the message he once heard from motivational speaker Eric Thomas, who said to always be phenomenal. Robinson’s father always reminded him that things are hard now so that they won’t be as tough later on in life, and such challenges are to be embraced.

Like many other high school seniors across the nation, Robinson enjoyed National Early Signing Week to officially sign his college letter of intent. Robinson signed Wednesday night to play at Florida A&M University, in a private celebration held at Osswald Park in Fort Lauderdale. The event was provided thanks in part to the Marlins RBI Baseball Foundation and the Canes Youth Development Organization, and also included a welcome from the President of the Broward Alumni Association and members of Florida A&M Rattlers Alumni Association. Former Florida Marlins Gold Glove catcher Charles Johnson also attended as a surprise guest to personally welcome and congratulate Robinson.

“This was very overwhelming, but I am glad I got as much support as I did and the presentation they put on for me,” Robinson said. “The FAMU alumni, my family and friends, the RBI program with Juan and Charles Johnson coming too, I just never expected it. I was really surprised by it. This means a lot to me. Growing up where I live, there are not a lot of people that support baseball. But now they hear about a guy from Pompano Beach signing for baseball. I love baseball and I loved it from the very first time I picked up a baseball and a bat.”

Perhaps no one in attendance understood those feelings better than Johnson, who signed to play at the University of Miami before later getting drafted and winning the World Series with the Florida Marlins. He has close ties to the Rattlers, as his mother, father, sister and brother all attended Florida A&M University, and his father still supports the baseball program there.

“It’s seems like I just stopped playing a few years ago even though it has been a long time since I left the high school and college game, and I know what it feels like to sign your letter of intent to go to a school,” Johnson said. “For me to come here and support him probably means a lot to him, but it means a lot to me also. I was very excited about coming here tonight and I had the opportunity to see him play yesterday at Marlins Park and the kid looked very good playing the game. I have the opportunity to give support to the young man who is going off to play the sport of baseball. I am very thrilled for the RBI program because it gives kids the exposure people need to see them when they have that opportunity. A coach sees him playing a game somewhere and now he gets a chance to have a scholarship. So I am very proud of him and I know he is going to do well up there.” 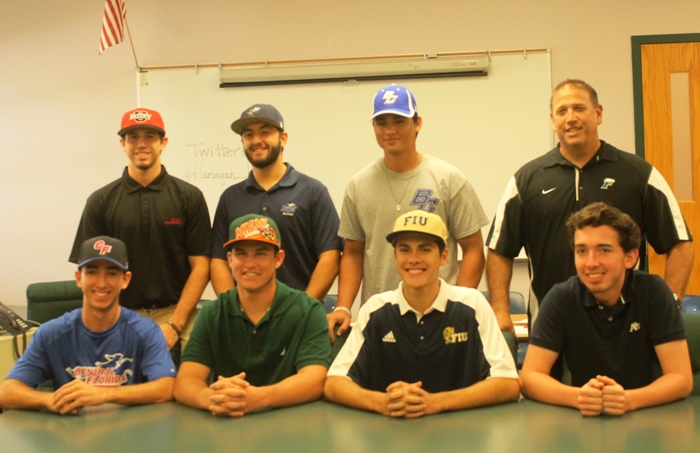 Seven members of the Flanagan Falcons signed together at a ceremony held on Thursday afternoon.

All around the county many other student athletes also enjoyed their signing experiences. Two-time defending state champion Archbishop McCarthy celebrated eight signees during a special ceremony that also included several student-athletes from other sports. Andrew Fernandez and Adan Fernandez both signed with Florida International University, Ubaldo Lopez with Dartmouth University, Jose Martinez to St. Joseph’s, Johnny Leone with Nova Southeastern University and Daniel Federman, Joe Perez and Alex Toral all signed with the University of Miami.

“The most important thing is that this team has gone through it together,” said Toral, a four-year varsity starter that has been committed to the Canes since his sophomore season. “Since day one we’ve been best friends, and to be able to push each other and motivate each other to get to today is something awesome that I want to remember forever. They are not only my friends; I treat them like family. Everybody growing up wants to play the game for as long as they can and college is the next step of life. Everybody here has really wanted to do that. We all get to go try our best to win a college world series and it’s going to be fun competing against each other after we’ve been playing together for such a long time.”

The Miami Hurricanes saw five Broward signees in all, as Douglas’ Brandon Kaminer and Flanagan’s Jeremy Cook both also signed with the Canes. Kaminer was one of four players to sign for the 9A state-champion Eagles, with David Vasquez inking with North Carolina State, Chad McDaniel signing with Missouri and Rafael Santos to Florida Atlantic University.

Cook was one of seven Flanagan Falcons to sign during a ceremony on Thursday afternoon. Arrison Perez signed with Barry University, Iyosvany Castaneda to Broward College, Ricky Presno with Central Florida Community College, Justin Ricard for Florida International University, Nick Davila to Hillsborough Community College and Alex Hernandez with Nova Southeastern University. Having that many teammates together for the same experience made it even more special.

“It brings us closer and all of us are working our hardest to go to the places that we want to go,” Cook said. “All of our signees are happy with where they are going, which is really what matters the most about that. It’s good to have a nice big class to be signing with.”

Cook has been around the Flanagan program since he was a young kid, as Flanagan manager Ray Evans pointed out during the ceremony.

“It is true I was a young kid watching the games with coach’s son, Tyler. We’d be in center field hoping they’d win and watching them win and it was great,” Cook said. “I just really want to wait for our turn now. I’m a senior and I’m trying to make it happen. It’s really a great feeling to be one of the number one pitchers on this team and to take us to states, if we can get there.”

Flanagan is another program that has enjoyed success at the state tournament, with three state championships and a national championship previously. But it is the ability to keep helping student-athletes reach their college dreams remains the biggest reward.

“It’s a great program and so many kids that come here sign,” said Ricky Presno. “Thanks to Coach Evans, he gets us to nice places where it will be just like a family like it is here. It is just an honor to come through this program. This is a big relief. Over the past several months I was not really sure where I was going to end up, but I found a home in Central Florida. It is just a big load off my shoulders knowing that I’ll have a place where I’ll be going next year.”

Now that this big moment is accomplished, the future is clearer and more certain. Yet there are so many more student-athletes still out there awaiting their chance, and there are lessons to be learned to help prepare them for their moments.

“Always stay humble and don’t boast about. There is always a sore loser and always a sore winner, and you don’t want to be any of those,” Robinson said.