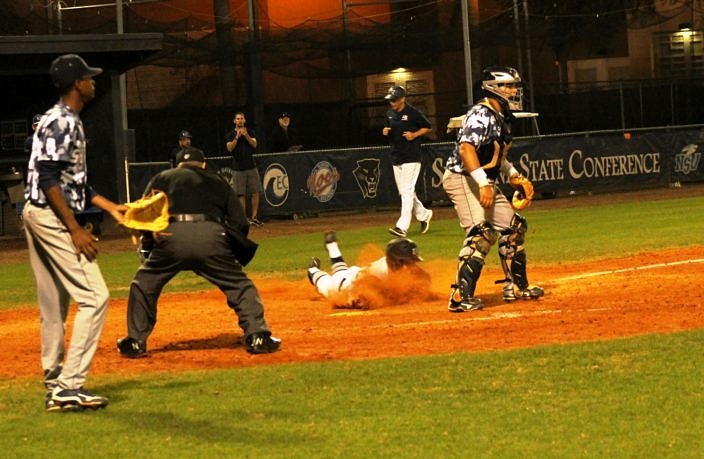 Josh Laprest slides across the plate for the running for University School.

Already two games into the season University School manager Josh Snyder has dubbed his guys the “Cardiac Kids”. Following a narrow victory on Tuesday to kick off the 2017 baseball season, University embraced their new title by walking off with a 4-3 victory over Alonzo T. Mourning Thursday night at Ian Besner Field at Nova Southeastern University.

With Josh Laprest on second base after tying the game with an RBI single, University’s Jake Pfundstein lined a single past first base to allow Laprest to race around third and slide across the plate for the winning run.

“This team doesn’t quit and we fight to the end,” Pfundstein said. “I just wanted to swing the bat and get a good pitch to drive with one out and a runner on second. I wanted to score him and do good for my team. I was very happy to get the first win at home; I was just very happy for my team.”

The inning had begun with the home team trailing by a run and down to its final three outs. Cole Standifer immediately sparked his side by lining a single through the left side for a lead-off single. Standifer wasted no time in stealing second base on the first pitch to get into scoring position, and Buddy Heyward’s infield groundout moved him within ninety feet of tying the game. Laprest then came through with a liner through the right side for the tying RBI single.

Drew Snow earned the win in relief of starter Scott Gutstein, who allowed two earned runs in five innings while striking out four. Snow retired all six batters he faced and picked up two strikeouts while needing just 16 total pitches. 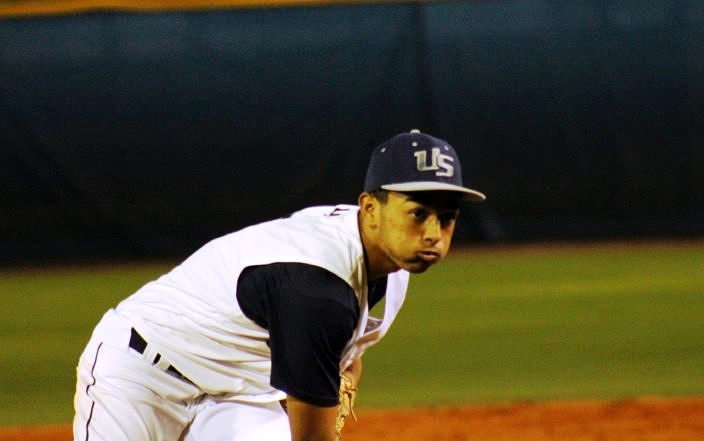 Scott Gutstein struck out four in five innings of work for University School.

University (2-0) fell behind right away after surrendering a pair of runs in the first. Standifer walked and later scored on a wild pitch, and Sammy Guillorme had an RBI single that evened things up in the second. Mourning answered back to go back up 3-2 in the third, and held that lead right down until the final play.

“We are staying confident in what we do, and it is just about the in-game adjustments that we are not making,” Snyder said. “Early in the season it’s going to happen, so I’ll give them a little bit of slack. But there is no way that we can continue to play the way we’ve been playing and continue to win ball games.”

Snyder is looking for improvement from the offense in particular. He wants his guys to swing at better pitches and have better quality at-bats and let the pitchers do their job. If the hitters can make better pitch selection the coaching staff may not need a defibrillator handy in the dugout.