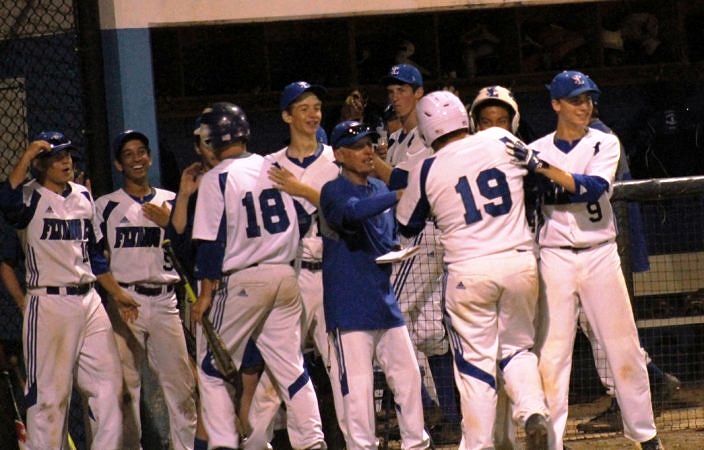 Fort Lauderdale celebrates during a big first-inning that set them on the way to the home victory on Monday.

After honoring one of their own in a special pregame ceremony, host Fort Lauderdale jumped out to a hot start that carried through for a 9-6 victory over visiting Hallandale on Tuesday night at Eileen Portice Field. Fort Lauderdale scored all its runs in the first three innings, starting with a six-run first inning that erased a two-run deficit and put the Flying L’s (1-1) in the lead for good.

Besides tallying the deciding run in the second, catcher Sean O’Connell also got it started from the leadoff spot in which he reached base three times in four plate appearances. O’Connell ignited things in the bottom of the first with a single to left, starting a chain-reaction that helped Lauderdale bat through the order in the frame.

Bryce Ledwitz lined a single past the shortstop and Alexander Rodriguez got the scoring started with an RBI single to left field. Starter Chris Brucks was hit by a pitch to load the bases and keep it going, and Michael Reiskind followed with a sac-fly RBI to score courtesy-runner Cameron Pitzer. Next Brandon Alfano had an RBI single, followed by an error that allowed two more runners to cross the plate and landed Joshua Brown at third. Argelio Morejon finished it off with an RBI groundout that gave Lauderdale a 6-2 lead.

“That’s what we’ve been waiting for all year,” O’Connell said. “We want to come out here and show our fans. We had a big crowd here tonight and it’s just a ball game. That’s all we want to do is have fun out here and we want to win. We let that intensity drive us the whole way through. It felt great. We’re undefeated at home.”

The momentum seemed to come in part from the host’s pregame ceremony in which a large group of guests were honored and thanked for their generosity to Flying L’s Baseball. The occasion recognized the donations from the estate of William Fanizzi, a 1981 Lauderdale graduate and former pro ball player who passed away last February, as well as the donations of his extended family and many more. The funds went directly to a new batting tunnel for the team, which was named after Fanizzi. Among the many esteemed guests were Fanizzi’s former coach, Jack Trainor, as well as Fort Lauderdale mayor Jack Seiler.

“William was a young man that graduated in ’81 and passed away way too early, obviously,” Portice said. “Their family and him are very generous to the program and we wanted to recognize them. Since we used the money on the hitting tunnels I thought it was appropriate that we named the hitting tunnel after him.”

Perhaps the greatest tribute came from the way the guys came out swinging the bats. The first three batters had hits to set that tone. 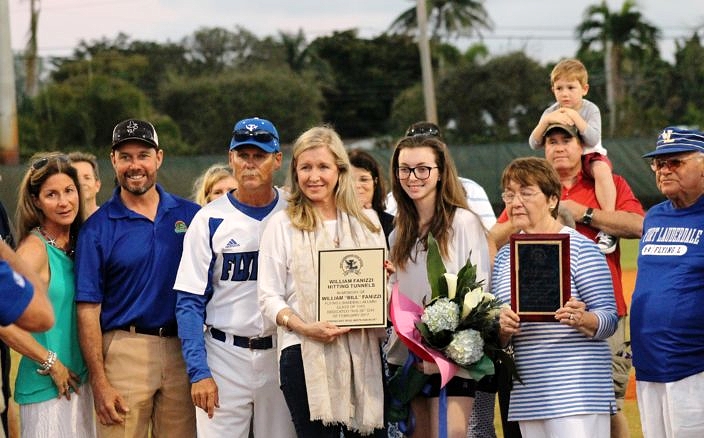 “It was nice to see us come out and swing the sticks,” Portice said. “We had kids put together hits and use the center part of the field. It was really nice to see and I was happy for the kids. I thought our kids held their composure well throughout the game.”

Although the two teams have not been in the same district together for years, they have a long-standing history stemming from years of competing against one another in district play. That friendly rivalry continues on to the present, and now it is better than ever. Tuesday’s meeting represented the new era of the rivalry.

“I just want to give a ton of credit to Coach Greg Conde; he’s doing a great job down there at Hallandale,” Portice said. “It used to be that you played Hallandale and you could mark up a victory. He has these young kids busting their humps and they are extremely competitive, and I have great respect for what he’s doing.”

While every team is focused on improving in the necessary areas, the Chargers (1-5) had plenty of positives to build off of. The team got started right away by taking a lead in the first, it rallied late with four runs in the fifth to get back in the game, and the offense recorded nine hits.

Perhaps the biggest high point came from reliever Jonathan Ortiz, who came on the mound in the second inning and proceeded to record 14 strikeouts while keeping his guys in the game. Argelio Morejon and Giovanni Brown both scored unearned runs in the third, but otherwise Ortiz avoided much trouble. 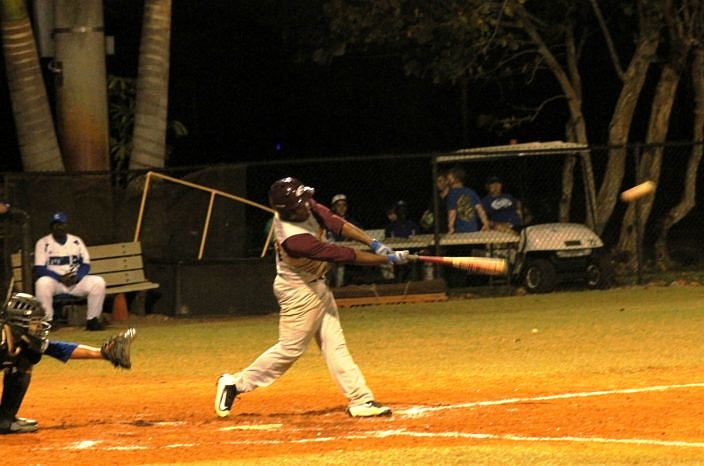 Hallandale had nine hits and plenty of offense as nearly every starter contributed.

Hallandale grabbed the early momentum with two runs in the first. Raymond Santiago was hit by a pitch and then quickly stole second, Alex Maldanado singled to center and Santiago came in on an error. Next Alex Gomez had a nice, opposite-field single to right field that drove in Maldanado.

Trailing late, the Chargers mounted a rally in the fifth. Santiago singled and Justin Lopez was hit by a pitch, which eventually led to Santiago scoring on a wild pitch. After Gomez walked, Pablo Oden delivered a sac-fly RBI that plated Lopez, and then Gomez worked his way to third. Jamal Taylor walked as Gomez came in on a passed ball and Brian Vallejo lined a shot deep to left field for an RBI double that pushed Taylor across the plate.

Santiago and Lopez both singled with one out in the sixth, but reliever Cameron Pitzer dug in and retired the final five batters in order to preserve the Flying L’s victory.