University Walks-Off Chaminade In Game Of The Week

The University School Sharks may not have played a perfect game on Thursday night against district rival Chaminade-Madonna, but the Sharks kept their perfect record intact, surviving with a 3-2 win in the HSBN Broward Game of the Week.

University sent its ace, Buddy Hayward, to the mound against the Lions, and he delivered what has become a typical performance. Hayward cruised through six innings, allowing only a pair of runs in the sixth on the night. The senior finished with eight strikeouts, while only giving up four hits. He also knew the importance of this game.

“This was a big district game for us versus one of our rivals,” said Hayward. “We knew this game could set the tone for the type of season we want to have, so to be able to give up the lead and then come back and win late, it is a huge confidence boost.”

The Sharks were led by an opportunistic offense that did all the little things right that are needed in a tight ballgame. University executed several sacrifice bunts, stole bases when it needed to, and came through with clutch hits.

Sammy Guillorme was the catalyst for much of the night. In the first Guillorme singled, and then he had an infield single in the third, scoring Jonathan Miller. Guillorme later scored himself, giving the Sharks a 2-0 lead.

“We know that we don’t have a lot of guys that can hit the ball out of the park,” said Guillorme. “So we have to do the little things like putting the ball in play, bunting, stealing, in order to score runs. Tonight we were able to do that.”

It looked like the two runs were going to hold up, with Hayward cruising, but he worked himself into a jam in the sixth.

Gianni Tusa led off with a single, and after a hard-hit line-out to short, Chris Schoeller drove in the Lions’ first run with a double down the left-field line. After a walk, Chaminade pulled off a double steal, and Roberto Petit’s ground out brought in the tying run.

“I like the way our guys fought to get that game back even,” said Chaminade Manager Jorge Miranda. “Their guy was throwing the ball well, so being able to scratch those runs across gave us confidence. At that point, I thought we were in a pretty good position to win the game.” 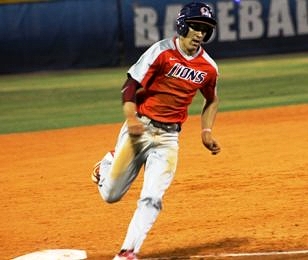 The Lions had their chance to take the lead in the seveth when Robert Kildea hit a one-out double to center. Reliever Scott Gutstein, however, worked out of the jam by inducing a ground out, followed by a strikeout to end the inning.

In their half of the seventh, it was again the execution of the Sharks’ offense that was the difference. Andrew Grinberg reached on a third strike that went to the backstop. Miller then dropped a bunt that Grinberg beat the throw to second base. Guillorme then dropped a perfectly-executed sacrifice bunt, moving the winning run to third.

With the infield in, Jake Pfundstein chopped a ball to second base. Grinberg beat the throw home, and the fielder’s choice won the game for University, who moved to 8-0 on the season.

With runners on second and third and one out, Manager Josh Snyder could have opted for a squeeze, but instead let Pfundstein swing away. The reward in that faith was his second walk-off hit of the season.

“He has been hitting the ball well, and he is good at elevating the ball when he needs to,” said Snyder. “So I wanted to let him swing the bat in that situation. I had confidence he would come through.”

For University, the win extends an impressive win streak to start the 2017 campaign. The players and coaches know, however, they will have to keep the momentum up if they want to be the first Sharks team to reach regional play since 1991.

“We know what our goals are this year,” said Snyder. “Danny did a good job of laying the foundation for us, and now it’s up to us to continue that growth. We think we are capable of competing with anyone in our district, and we just have to keep working each day to get better as the season goes on.”

Snyder was referring to former Manager Dan Rovetto, who was in the house watching his former team Thursday night. Rovetto left the Sharks this past off-season when he took a scouting job with the Seattle Mariners.

As for Chaminade, the Lions also are working under a first-year manager, and he knows that there will be some growing pains along the way.

“The kids are still adjusting to a new system,” said Miranda. “Its going to take us a while to change the culture. Many of these guys are seniors and have done things one way for the past three years, so they are adjusting. I like the way we fought tonight, and I like the direction we are going. So we just have to stay the course and keep working day after day to accomplish our goals and get where we want to be.”

University's Jake Phundstein talks about his game-winning at bat…