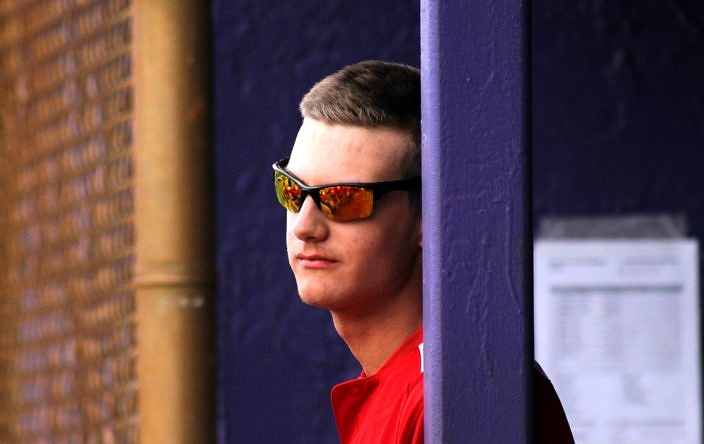 “It feels good to come off the bench. I don’t see a lot of game play and I just want to help the team every chance I get,” South Broward’s Braedon Mason said, after driving in the winning run on Thursday.

South Broward senior Braedon Mason is not a regular starter, and he has embraced his role coming off the bench into games. He fills in on the mound, in the outfield and as a pinch-hitter, and he is willing to do whatever is asked of him to help his team.

In Thursday afternoon’s HSBN Broward Game of the Week at South Plantation, Mason was substituted into the lineup with two runners in scoring position in a tie ball game in the top of the seventh. Mason delivered a grounder that allowed both runners to score and South Broward held on for the 4-2 victory over the Paladins. With no outs and two men in position, Mason’s hard liner up the middle likely would have plated the lead runner under any circumstances, but when the ball got past the drawn in defense it allowed both base runners to score.

“With runners on second and third, I just looked at Coach and he told me to hit it into play,” Mason said. “The first pitch was a bit outside and I swung at it because I thought it was a good pitch to swing on, and the next pitch was a ball in the dirt. So I was just looking for anything that I could put the ball on the bat, and luckily the next pitch I got it and got it into play. It just happened and we got those two runners in to help us win.”

The Bulldogs (14-7) started the rally when Dave Brown reached on an error and Manny Lebon followed by lining a double into left field. John Hall came in to run for Brown and tallied the winning run.

South Broward came into the game on a cold slump at the plate, but the bats got going late to turn those fortunes around. Riley Rosario got it started in the top of the sixth to break up a scoreless contest and put the Bulldogs on the board, as he bounced a lead-off single up the middle. Makai Simons walked and Kevin Laguardia dropped a single into shallow left field to load the bases, before Rosario was forced out at home on a suicide-squeeze attempt that put Ryan Nunez at first with the bases still loaded.

Antonino Schembari capped off a strong day from the lead spot in the order by working an RBI walk, as Schembari reached base for the fourth time in four trips by going 2-for-2 with two walks. Salvatore Zaremba then increased the lead with a fielder’s choice RBI on an infield grounder, as he also reached base all four plate appearances with two walks. 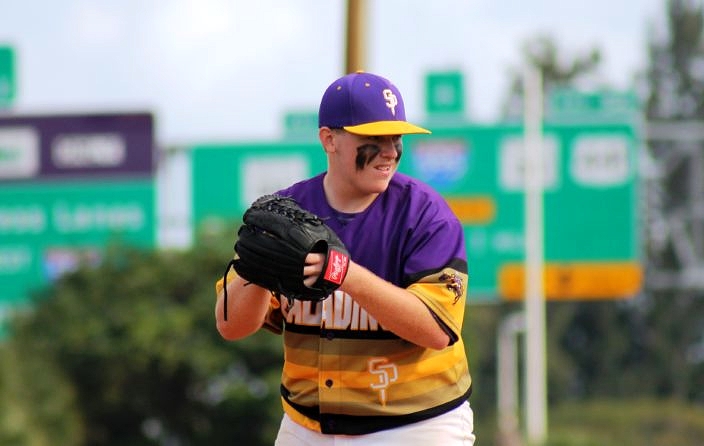 “It was a good time to get some good hits,” South Broward manager Charlie Cardinale said. “I knew coming back from the break that we might be a bit rusty and then we worked hard on hitting for the first two days back. Then last night against McArthur we went eight innings and only had four hits, and today we were struggling a little bit. But in the end we got the hits we needed in the right time. Braedon Mason came up with clutch ground ball with men on base that squirts on through and the next thing you know we’re up two.”

A big reason for the Bulldogs’ struggles came in the solid pitching from South Plantation starter Jeff Cohick. The sophomore right-hander battled into the sixth inning, scattering seven hits and six walks while striking out four. He was effective at keeping counts in his favor and getting batters to swing at his pitches.

“I can’t say enough about Jeff; he has been our rock and he has kept us in every ball game,” South Plantation manager Trevor Chang-Leung said. “If the offense could pick it up for him he would be looking at a lot more wins, because he has kept us in every game. We hit a real rut midway through the season and Spring Break was a little rough, with us missing some guys. They had a team meeting yesterday and these guys brought it together, and if we get that effort going forward here to close up the season we’ll be in good shape.”

The South Plantation offense had its own struggles against the tough pitching from Bulldogs starter Yjordan Maldonado, who went the distance for the victory. The right-hander was perfect the first time through the order, before Ivan Sola broke up the no-hit bid with a base hit past first base in the fourth. Maldonado scattered four hits and struck out seven without issuing any walks.

The Paladins (6-14) broke through with a strong sixth inning that evened things up. Brandon Holifield got it started with a liner that split the right-center field gap for a one-out double, and Christopher Campi followed with a single. Luis Morel advanced the runners on an infield ground out and Sola rolled a single up the middle that brought both base runners home. 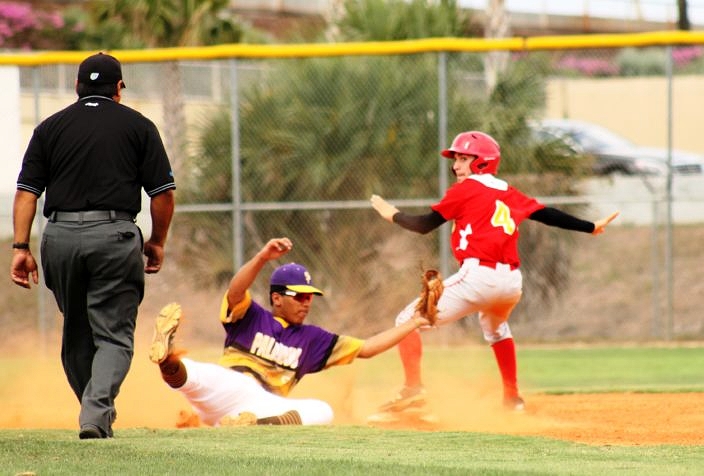 South Broward’s Antonino Schembari just beats the tag for a stolen base.

With the district playoffs less than two weeks away, both clubs were pleased with the effort. The teams are finding their identities and showing the type of grit the coaches want to see heading into the playoffs.

The victory surpasses South Broward’s win total from a season ago, and also matches the program’s best mark in the past five years.

“It’s good for the kids,” Cardinale said. “They’ve played a lot of tough games this year and they have worked hard. So to get to 14-7, they are feeling good about things. But they know that two weeks down the road is what we are really looking at. Hopefully we can do things a little bit differently than we did last year. We are a year older, a year wiser and, hopefully, a year better.”