Monarch Walks Off 8-7 Over West Boca 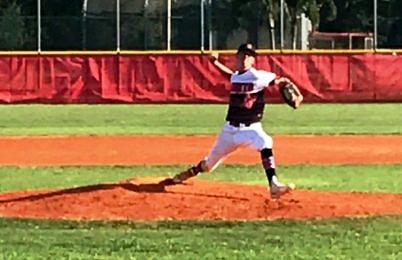 Brett Beuchert earned the win for the Knights.

Brett Beuchert took a pitch to the helmet that plated the winning run for Monarch in its 8-7 home win over West Boca on Wednesday. Afterward, Beuchert could only shake his head.

“It was crazy. I was trying to put the ball in play and then it hit me, so it worked out,” Beuchert said. “I was willing to sacrifice myself, but I was still surprised. It was a wild game that we will take.”

The wild game ended with pinch-runner Jeremiah Rivera crossing the plate to give the Knights a walk-off victory in the bottom of the seventh inning on Senior Day. Pinch-hitter Ryan Alba delivered the big hit in the inning, an RBI single down the right field line, that scored pinch runner Troy Alexander with two outs to tie it at seven. Alexander came onto the bases and stole second in place of Max Wank, who walked with one out.

“I have a lot of confidence in these situations. It’s in my blood,” Alba said about pinch hitting. “I like to swing away and just have fun. I know I can get the job done.”

“Ryan is a guy who earned the first base job as a sophomore,” Hollingsworth said. “He’s never afraid to swing the bat in a big spot.”

Beuchert was hoping to do the same, but it didn’t turn out the way. It turned out for the better. The senior right-hander also got the win in relief, pitching two shutout innings, while allowing two hits, striking out two and walking none. 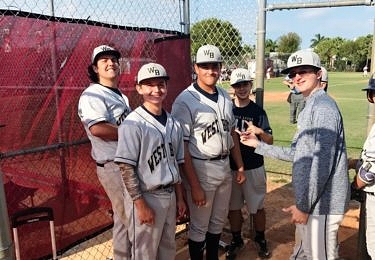 The Bulls celebrate in the dugout with Alex Cordero after his grand slam in the fifth inning.

“I was spotting my fastball,” Beuchert said. “They weren’t hitting it, so I stayed with it.”

Alex Cordero’s grand slam to right center gave West Boca a 7-5 lead in the top of the fifth. Cordero’s second homer of the season came on a 2-1 fastball that he said he sat back on and hammered.

“On 2-0, I took a big swing and fouled off the fastball. The next pitch was the same thing, right down the middle, and it was a no-doubter,” said Cordero, who led Palm Beach County with 10 homers last season. “This one felt more hyped than usual. It brought our confidence up.”

But the Bulls were unable to hold off Monarch’s final rally.

“Our pitching didn’t get the job done today. Too many free passes,” Bulls manager Bobby Stallone said. “As long as our pitching is on, we have a chance. We are hitting and seeing the ball well.”

Both teams now look towards the district playoffs. Monarch (7-14) hosts Deerfield Beach in a District 11-9A play-in game on Monday. West Boca (4-17) takes on Olympic Heights in a District 14-7A opener Tuesday at Dwyer High.