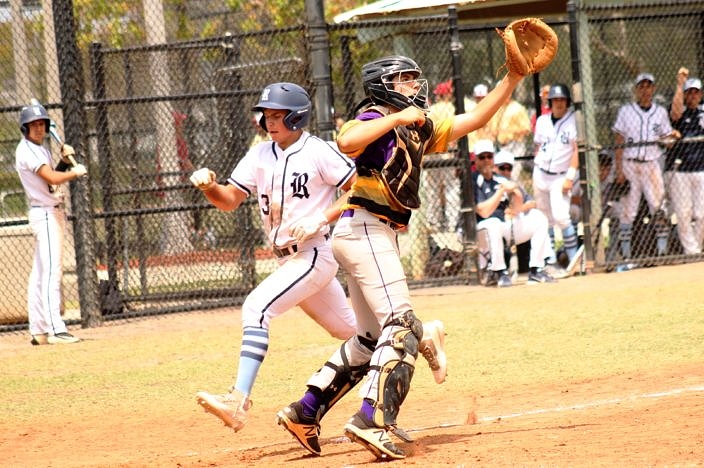 The Rams score a run just ahead of a throw to the plate.

The Reavis Rams traveled to Pompano Beach during their Spring Break to compete in the HSBN March Madness Shootout, getting a chance to represent their home state of Illinois. Due to a delay at the start of action on Thursday morning, the Rams also got a chance to share and learn some new games to pass time during delays. South Plantation and Reavis competed in tic-tac-toe, king-of-the-hill and rock-paper-scissors before finally taking the field, where Reavis earned a 3-2 win in eight innings.

Reavis and South Plantation know how to make use of the time in a game delay.

The game was back-and-forth throughout, as the lead changed hands three times and was tied on three other occasions. Competing in the final game of the four-game tournament, both sides laid it all on the line to finish the tournament strong.

Andrew Padilla singled and later scored on an error in the bottom of the eighth inning to give the Rams (7-7) the walk-off victory. Peter Madritsch walked, Padilla singled with one out and Bailey Boyd also walked to load the bases. A fielder’s choice erased the lead runner, and Padilla then came home when the ball got away from the defense.

Right-hander Ryan Greene took the loss despite a quality start for South Plantation (5-12). Greene allowed no earned runs on four hits and two walks, working into the eighth inning on an efficient 86 total pitches.

Xavier Rosado also delivered a quality start to earn the win for Reavis, as he went seven innings while allowing two earned runs on eight hits. He did not walk any and recorded three strikeouts. Matt O’Shaughnessy pitched a scoreless eighth inning to preserve the win and earn himself the save.

The Rams took an early 1-0 lead in the bottom of the first inning. Sedlacek reached on a bunt single to third base for the first of his two hits on the day, and he advanced to third when Padilla reached on an error. Boyd then executed a perfect suicide-squeeze bunt to drive Sedlacek home.

South Plantation evened things up in the third. Keanu Jacobs lined a single to center field and Brandon Schreiber followed with a single to right. Both runners advanced on a wild pitch, and Jacobs scored when Blake Butler reached on an RBI fielder’s choice.

The Rams went back in front in the bottom of the fifth. Kyle Murnane singled to right field, stole second and Jessy Hernandez then reached on an infield error that put runners on the corners. Omar Nunez dropped down another squeeze-bunt that brought Murnane in to put Reavis back in front with a 2-1 advantage.

Again the Paladins rallied back to even things back up, this time with their final swings. Down to the last out in the top of the seventh, Briston Dearmas singled to left field and Luis Morel then collected his second hit of the day on a base hit to right field. Jacobs followed with an RBI single to left that plated Dearmas to force extra innings.

Morel was 2-for-2 with a double, Jacobs was 2-for-3 with an RBI and a run and Schreiber went 2-for-4 for the Paladins.

The two clubs forged new friendships and shared hilarious antics during the pregame delay, exemplifying all the things that make baseball such a great game. Dominoes fell and wild buffalo were hunted, both of which were scenes not typically witnessed on a baseball diamond.