Cooper City Holds Off Hollywood Hills To Advance In 8A-15 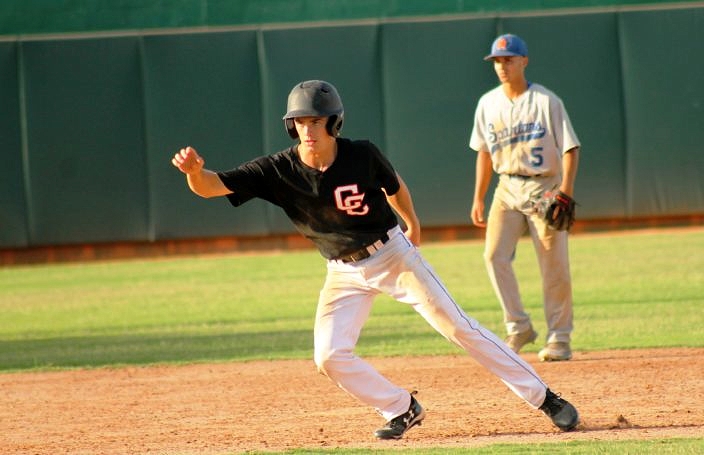 The Cowboys had base runners in every inning thanks to 10 hits collected by the offense.

Cooper City starter Doug Weimann summarized the feelings that resonated with the entire team following their 5-3 district playoff victory over Hollywood Hills on Wednesday afternoon. The Cowboys starter played a large role in the result with his performance on the mound, and it was a day he admitted he won’t soon forget.

“This is possibly the best feeling I have ever had in baseball,” Weimann said.

After doing his part, Weimann was left as a spectator for the final crucial outs with the Spartans rallying in the top of the seventh inning. Freshman shortstop Elijah Baxter snared two liners to secure two of the final outs, leaping up to rob a hit that could have changed Cooper City’s fortunes for the first out of the seventh and then charging to secure the second hot-shot that ended the game and sparked the celebration.

Weimann battled through six strong innings, but ran into trouble in the seventh and turned things over to the bullpen. Alfredo Bisono reached on an error and Jonathan Campbell walked to keep Hollywood Hills’ hopes alive, and walks to Brian Acebo and Hunter Fiori pushed a run across and increased the pressure. Right-hander Jeremy Brower then came in and induced three straights outs to preserve the win and earn himself the first save of his high school career.

Baxter used every inch of his 5’4″ frame to extend up and grab the first out on a liner to left that could have spelled doom for the Cowboys (11-11). Justin Pujols followed with a flyout to right field that drove in Campbell with the last run of the contest, before Baxter again found himself in the right position to make the final play of the ball game.

“It was all hands on deck, and winning today means we get to play in the regional playoffs next week. Right now, that is all that matters,” Cowboys manager Brian Clark said. “The kids did a good job and only made that one error on the day, so they made them earn it. The last inning was a little hairy, but Jeremy shut them down and we got the win. We look forward to the district championship tomorrow night.”

Hollywood Hills (7-10) earned a reputation as a scrappy team this year, and the Spartans lived up to that with a tenacious effort right down to their final swings. Even despite falling behind in the first, Hills stayed in the fight until the end.

Justin Pujols with a sac-fly RBI for Hollywood Hills to pull within two runs in the seventh.

Weimann was shaky early on in allowing five batters to reach base the first time through the order, but settled in from there to limit the damage and maintain the lead. Hollywood Hills loaded the bases in the second when Juan Rosario singled to right field and both Christopher Maria and Tyler Prisco walked to follow. Justin Braden then stroked an RBI single past the shortstop to get the Spartans on the scoreboard.

“It took me until the third or fourth inning before I started to really dial in,” Weimann said. “I stayed away from the changeup and really worked the fastball to get ahead, and then worked the curveball in every now and then to get batters out. You just have to do whatever you have to do to get outs. We came in here looking to get outs, whether it was strikeouts, flyouts or on the bases.”

Cooper City struck for three runs in the bottom of the first inning to take control and stake its starter with a lead it never relinquished. James Runnebaum singled to left, Dylan Silver was hit by a pitch and Nathan Rodriguez walked to quickly load the bases. Trevor Reto then got things going with an RBI single that set in motion a monster day at the plate for the senior outfielder. Ryan DeLeon worked an RBI walk and Brandon Newland followed with an RBI single to right field.

Reto was back at it again in the second to drive in the deciding run. After Runnebaum walked and Rodriguez rolled a single up the middle, Reto sent an RBI single up the middle to make it 4-1. He also doubled, stole third and scored on an RBI single to left from Newland for an important insurance run in the bottom of the sixth. Reto was 4-for-4 on the day to lead all hitters.

After running into trouble right away, Hollywood Hills turned to the bullpen quickly in the first inning. Senior left-hander Justin Braden came on and carried his club into the sixth inning with an impressive outing that kept the Spartans’ hopes of a comeback alive. The southpaw allowed two earned runs on seven hits and four walks over five-and-a-third innings, and he struck out three. 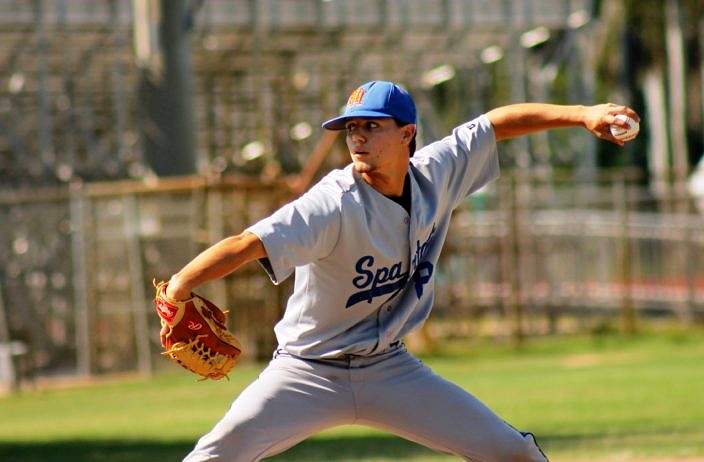 Justin Braden delivered in relief to carry Hollywood Hills into the sixth inning.