Sagemont Shuts Out Marathon To Return To 3A-8 Final 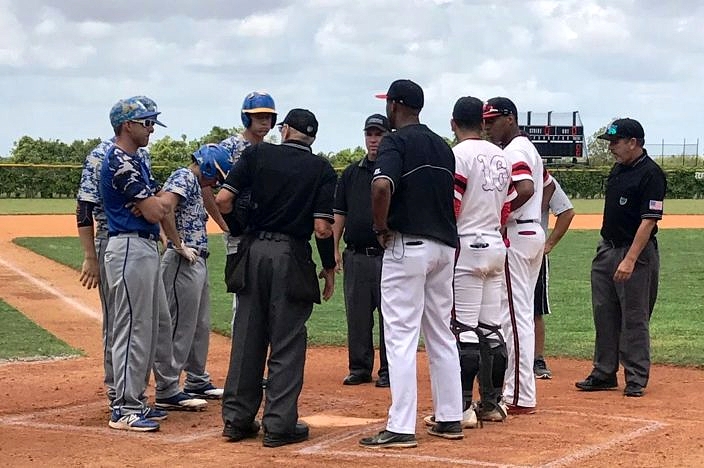 The Lions and Warriors at the pregame plate meeting at the start of their 3A-8 semifinal.

The Sagemont Lions earned the chance to defend their district title following a 10-0 shutout victory over the Marathon Dolphins on Tuesday afternoon, in a 3A-8 semifinal played at Archbishop Carroll in Miami. The Lions (10-10) will enjoy a rematch with Archbishop Carroll, the same team they defeated a season ago to win the 3A-8 title. The top-seeded Bulldogs (23-2) also advanced to the rematch with a 17-2 win over Dade Christian in Tuesday’s other semifinal.

Sagemont got going with three runs in the bottom of the first inning and never looked back. Lead-off hitter Jonathan Vega set the tone right away by connecting for the first of four base hits on the day, as he went 4-for-5 with a double, an RBI and two runs. Keshav Babu and Adrian Parker also reached in the first, and Eric Verdera drove in a pair to get the scoring started.

Babu made his only hit of the game count, as he slugged a two-run home run in the fifth that extended the lead to 8-0. Alexis Castillo also had a pair of hits, including a double in the third inning, and Dylan Fineberg chipped in by going 2-for-4 with an RBI and a run.

Starter Jared Chirino earned the win with three scoreless frames. The junior left-hander struck out six and only allowed one base runner, coming on an error in the third. Alejandro Martin then finished things off with three scoreless innings of his own, allowing one hit while striking out three.