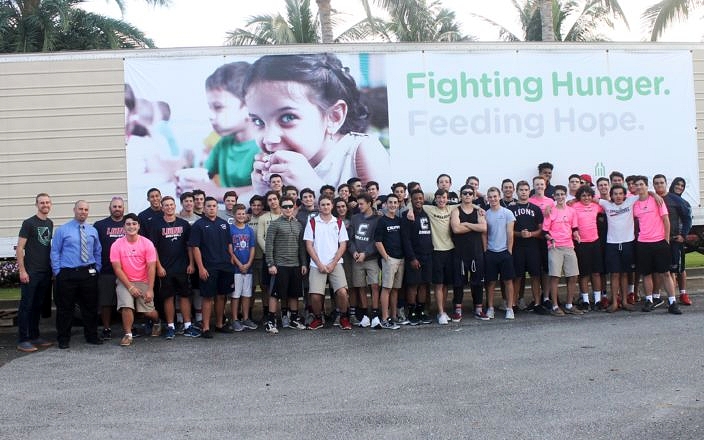 Members of the Calvary Christian and Chaminade-Madonna baseball teams combined to provide supplies for communities in Puerto Rico affected by Hurricane Maria.

This hurricane season affected South Florida very strongly, but thankfully things have mostly returned to normal just a few short months later. Meanwhile, our fellow state of Puerto Rico was devastated by Hurricane Maria and even now much of the population continues to struggle and wait for basic services to return to their community. Thanks to the Calvary Christian and Chaminade-Madonna baseball teams, more supplies are now on their way.

Chaminade-Madonna manager Jorge Miranda is Puerto Rican, with lots of friends and family back on the island enduring this humanitarian crisis. As a kid Miranda experienced Hurricane Hugo, and he knows things have been affected worse by Maria. Miranda attends church at Calvary Chapel, and he knows they are sending supplies on a regular basis. So he reached out to his best friend, Calvary manager Alan Kunkel, and the Calvary outreach program.

“Even though it seems like it has been a couple of months since Maria hit, a lot of people do not know that a lot of the area where the hurricane hit in the center of the island and the south side of the island are still not functioning,” Miranda said. “School hasn’t started, they don’t have any electricity, they don’t have running water and the help is just not getting there. Calvary has a church in Puerto Rico and they are doing a base of operations there and sending people throughout the island, so knowing that cousins, friends and family members are still suffering down there, it’s different for me. Knowing we can help even just a little bit makes a world of difference.”

The two baseball teams helped organize supply efforts for important essentials, such as water, bleach, diapers, tarps, flashlights and canned goods. Tuesday afternoon the two teams met at the Calvary campus to organize the supplies in the right designations and prepare to have them sent out. The entire process will take a week or two, which means these supplies will arrive right around Christmas. 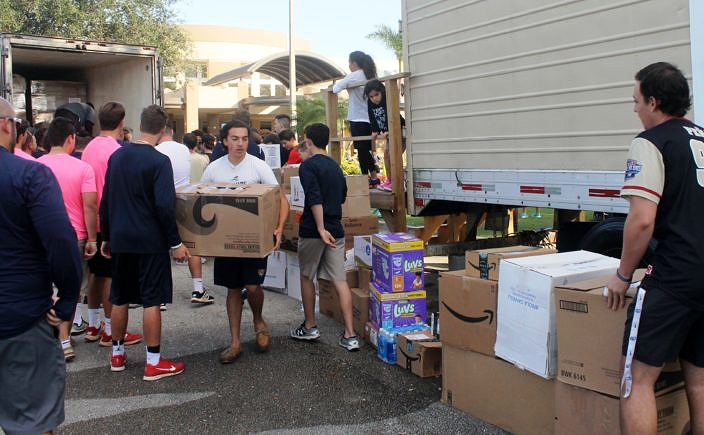 “It’s really cool when you have generous people who can sacrifice something this time of year from their own family and give to a family in need,” Kunkel said. “When Chaminade approached us about it, we were excited to do whatever we could. It’s interesting getting two teams together that are in the same district, but what it can inspire is that we are all part of the same community. We’re all a part of the United States, and we’re all a part of a larger community of people. That larger community has great needs, and we ask how can we reach out, supply and help those needs any way we can?”

Everyone here in South Florida knows what it feels like to be impacted by a powerful hurricane, and yet for most of us life has managed to return to normalcy. It is almost beyond the scope of imagination to envision what our fellow countrymen continue to endure.

“All of our communities in South Florida have families that they know that have been impacted by Hurricane Irma and Maria,” Kunkel said. “I talked to a former player of mine and his family is down there and they haven’t had power for months. They probably won’t have power for another six months. The infrastructure just isn’t what it is here to get things back to what it was. That’s something we all need to be consciously aware of it how many hurting families there are that we can continually help and provide aid to.”

Just a few months from now the players on these two teams will be battling one another for the district championship. But for now they have come together to do something important, something that means far more than the outcome of any baseball game. When the game is on, it would be a disrespect not to battle your opponent with all off your heart. But when you step out of the lines away from the action, moments like these help to remind that you are all brothers in arms.

“It’s pretty cool to see the guys come together and help each other out and stepping outside of their comfort zones for other people. It’s good to see. As a Puerto Rican, this touches me,” Miranda said.