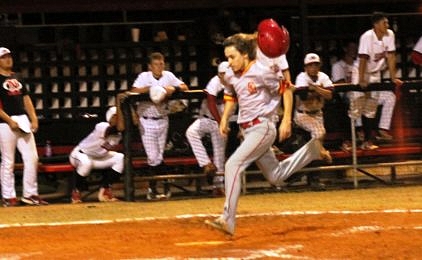 Max Markus scores the winning run in the top of the seventh inning for the South Broward Bulldogs.

Any baseball fans wondering about the Northeast Hurricanes and the South Broward Bulldogs will be pleased to hear about the type of quality baseball they can expect from them this season. While still only a week into the new season, the two clubs met Monday night at Davis Field in the District 7A-15 opener. HSBN and the fellow fans enjoyed a passionate tug of war through seven quality innings of baseball.

After things fell into a tie for the third time entering the seventh, the Bulldogs rallied for the winning run thanks to an RBI double from Makai Simons. Sebastian Lavan then closed things out to give South Broward the 3-2 victory that has them starting off at the top of the district standings.

Earning a road victory over the Hurricanes on their home turf at Davis Field is no longer an easy feat. The club devoted themselves to restoring their home field this offseason and they take great pride in protecting it. It is a great baseball environment of passionate fans, and Monday night several members of the marching band also attended to provide some live musical support. The Canes draw off that energy generated from their home crowd and it seems to bring out the best baseball in them.

“This was high impact and high intensity,” agreed South Broward manager Charlie Cardinale. “It was almost like a playoff game; it was crazy. We play each district team twice this year, so it is good that they will come back to us. But there was a lot of emotion and a lot of energy in this game. In the old days it was always just that Northeast would field a team that you wouldn’t know what, but now they’ve got a good little squad, a good group of kids, and they are going to be strong all season. We got away with one tonight, so we just need to hunker down and get ready for the next one.” 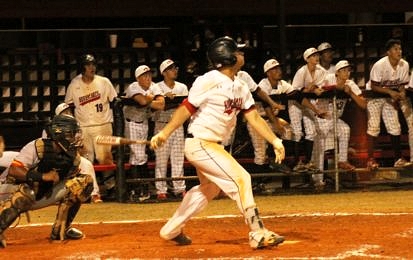 Nick Donatucci connects for an RBI double that tied things up for Northeast in the bottom of the sixth inning.

With things all knotted up heading into the final frame, South Broward got things going right away. Joshua Kirouac lined a lead-off single to right field and gave way to pinch-runner Max Markus, who was quickly off and running all the way around the bases to score the winning run on the strength of an RBI double lined into the left-center field gap by Simons.

“I was feeling pretty confident at that moment. My mindset was to get the ball in play and move that guy over. I had a job to do and I had to get it done,” Simons said. “You know, it feels great, because we have all been working really, really hard in the cages. Offensively, we are strong. This was a strong win for us.”

It was Simons’ third hit of the ball game, including an RBI single in the third inning that drove in Ryan Nunez to put South Broward (2-1) on the scoreboard. After evening things up in the third, the Bulldogs took their first lead when Antonino Schembari was hit by a pitch with the bases loaded in the fourth.

Northeast (2-1) got out in front with the lead in the bottom of the second. Robert Zuany sent a slow roller down the third base line for an infield single to start the inning. A pair of infield ground outs moved him along to third, where a passed ball then allowed him to cross the plate.

The third time through the order the Hurricanes put together some nice at bats to make it a 2-2 ball game in the sixth. Mickael Pierrot jumped on a pitch and lined it deep into the left-center field gap as he raced around the bases for a lead-off triple. Donatucci then followed with another shot to nearly the same location that went for an RBI double.

But the Canes did not have one last rally in them against junior reliever Sebastian Lavan. Despite starting the frame off by putting the tying run on base thanks to a single to shallow center from Nick Steinberg, Lavan was unfazed and responded by retiring the next three batters in order to finish off the victory.

Dylan Harbinson delivered a strong outing to earn the victory. The right-hander allowed one earned run on three hits and four walks in six innings. He recorded 11 strikeouts and also hit one batter.

As is often the case early on in the season, both sides are still working to find the right balance. Northeast could draw upon plenty of positive moments to build off even despite the loss, while South Broward could find areas of improvement even though they managed the victory.

“We had a lot of at bats, but unfortunately when we go and look back I have to say that some of them were not quality at bats,” Cardinale said. “We needed to put the ball down when we had to bunt and we needed to put the ball in play when we had guys in scoring position. We had some strikeouts in key times and you cannot do that and win games. But we were fortunate tonight. Northeast played a great game tonight and they are well coached, and it is going to be a dog fight all the way to the district tournament.”