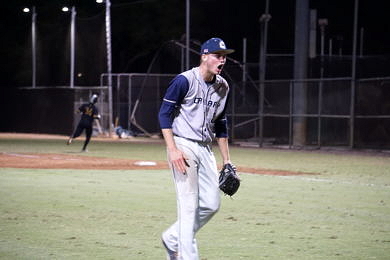 Two of the best high school baseball programs in the nation took the field Friday night, as the Calvary Christian Eagles took down the undefeated American Heritage Patriots 5-1.

The two squads feature 24 current college commits combined, some of whom will hear their name called in June at the upcoming MLB Draft, making this one of the most anticipated match ups of the 2018 season.

“Winning games like this gives us a lot of confidence going forward,” said Eagles manager Alan Kunkel. “We got a great outing by our senior, who settled down in the third, and really came in to his own, which is what you expect from a guy who’s been one of the best pitchers in this county for a long time. Hopefully, going forward we’re able to continue to stay confident, and we continue to stay humble.”

The Patriots (8-1) were able to draw first blood in the bottom of the first, after senior Julio Cortez drove in Enrique Bradfield on an RBI single to left. That’s all it seemed Patriot’s starter, Bailey Mantilla, would need, as he retired all nine Eagles in the first three innings.

Momentum shifted in the bottom of the third inning. Calvary starting pitcher, Christian Scott, struck out that side of the frame.

Calvary got their first base runner in the top of the fourth inning after a one-out walk to sophomore Dante Girardi. Raynel Delgado followed that with a single of his own. Unfortunately, the rally was cut short by Patriots right fielder Matt Ruiz, who threw a bullet to third to hose down Girardi. 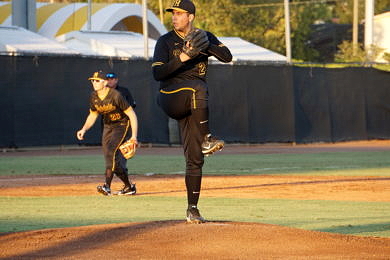 Bailey Mantilla gave up one earned run and struck out four.

The Eagles (10-1) didn’t have to wait too long to get another rally going. After both Daley Weppner and David Judge reached base on a couple of misplays by the Patriots, junior Mykanthony Valdez shot one in the left-center gap for a two-RBI double to put Calvary ahead.

“Bailey is a heck of a pitcher. We were struggling to get something going off him, so I was just looking for a good pitch, and I squared one up,” Valdez said.

That proved to be more than enough run support for Scott, who only allowed the one run in his six innings of work.

“We knew both teams were going to battle through seven innings, so I just wanted to do my job, and everything worked out,” Scott said.

The Patriots were able to get the bases loaded in the top of the sixth, but came up empty as Scott was able to get out of the jam cleanly. In the bottom of the seventh inning, Roberto Peña came in to close the door and complete the victory for the Eagles.

Despite being on the losing end, Patriots manager Bruce Aven said this game was good for them.

“We needed to have a game like this to make sure the we stayed focus and moving forward,” Aven said. “We’re too good of a team to start off the game the way we did, and then put them back in the game with the mistakes we made. We set out to become best baseball team we can be, but we didn’t do what it took to win tonight.”