Kyle Spohn drives in a pair to extend South Plantation's lead to 4-0 over Piper.

The South Plantation baseball team is a fun bunch to be around. The Paladins have a roster full of unique personalities that mesh well with one another, and the final combination creates a positive and energetic squad that enjoys playing the game together.

That cohesion was on full display on Monday, as host South Plantation clicked early and never looked back to secure a 10-0 victory over Piper in the 8A-14 opener.

Perhaps no player on the club can appreciate Monday’s effort more than junior ace Jeff Cohick, who earned the victory with four dominant innings of work. In previous seasons the Paladins (2-0) struggled putting runs up in support of Cohick’s outings, but Monday afternoon they struck early for a lead in the second and then kept pouring runs on to the end. The right-hander responded on the mound with a smooth outing, allowing a hit and a walk while striking out eight on a heavy dose of curveballs with a nice blend of complimentary pitches.

“It makes it a lot easier to go out there and throw strikes considering I had runs on the board,” Cohick said. “It just makes it easier for me to go out there and have more confidence that we have a lead. Good chemistry is going to lead us to good victories this season. I think we can get a lot more wins now that we all have good chemistry together. It’s going to reflect on the field.”

South Plantation struck for two runs in the first to take control. Robert Fernandes reached on an error and quickly advanced to third thanks to a double to center from Kyle Spohn. A wild pitch allowed Fernandes to score, and Spohn followed on a throwing error.

With momentum now on their side, Cohick responded to keep it there as Piper (1-4) looked to answer back in the third. Raudy Genao broke up the no-hitter with the Bengals’ only hit on a single past third base leading off the inning, and he moved into scoring position after Justin Parsons reached on an infield error. Cohick then struck out the next two batters swinging on a total of six pitches to quell the threat and get his side back in the dugout. 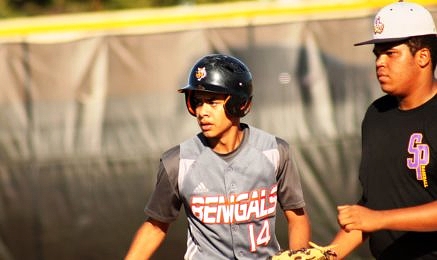 Raudy Genao had Piper’s first and only hit in the third inning.

The Paladins went on to score six runs in the bottom of the third inning to pull away.

“We’ve got a good group here, with a lot of young guys learning from the veteran guys who have been here a while,” Paladins manager Trevor Chang-Leung said. “You see it, it flows nice right now. Everyone is happy and getting along. We’re just trying to get some games under our belt, given that this is only our second game so far. But the energy is definitely there so far and we’re just trying to keep it as we go along here.”

The first two batters reached base to get things started in the bottom of the third. Austin Koehler lined a single past third and catcher Blake Butler reached on a fielder’s choice on a throwing error to second, before Butler gave way to courtesy-runner Julian Beckett. A double steal put both runners in scoring position, and Spohn delivered with another double that plated them both.

The Paladins continued to deliver quality at bats to keep things going. Argelio Morejon walked and advanced on a throwing error that allowed Spohn to score. Tyler Zirbes was next with an RBI ground out, and Kumar Lilman also walked to keep ducks on the pond. Lilman perfectly executed a hit-and-run play to score all the way from first as Holifield connected on a drive to left for an RBI triple, as the lead runner would have likely had to hold at third base had he not been in motion at the time of contact. A wild pitch then brought Holifield home for an 8-0 advantage. 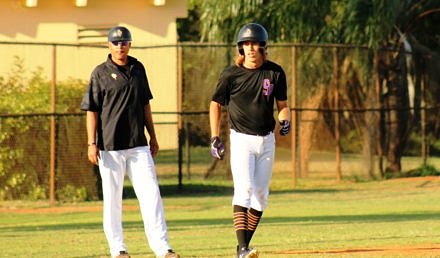 After last Friday’s game was rescheduled, Cohick was pushed back to Monday’s start. That has presented the Paladins with the chance to start their top pitcher with plenty of rest for both of their games so far, while still allowing Cohick to stay fresh heading into the next part of the schedule.

“He’s had two good Mondays in a row here and we did not have to over-use him today, which lightens our load since we’ve got games Wednesday-Friday-Monday again,” Chang-Leung said. “We’re getting into some of the tougher parts of the schedule here with St. Thomas and Nova, and that will keep him fresh to get his work in there. Hopefully he rolls into the district game against St. Thomas nice and fresh.”