Pompano Walks Off Gibbons In Emotional Game of Week 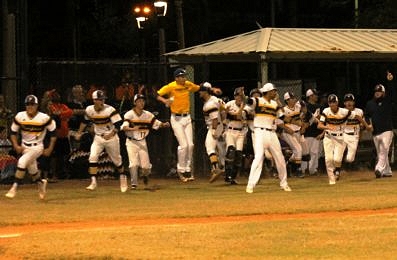 Pompano Beach storms the field in celebration following Jake Nord’s walk-off RBI single in the bottom of the seventh against Cardinal Gibbons in Friday’s Game of the Week.

Baseball is a beautiful game. As the world around us has grown and become more and more challenging, baseball has never changed. It is a game of grace and precision, one that reminds us all just how beautiful the world can be at times.

As our community continues to cope with the tragic events that took place at Douglas High School, the game of baseball serves as an excellent healing vessel.

Friday night two of 5A-14’s top teams faced off in a battle for district supremacy in the HSBN Broward Game of the Week, a battle that lived up to the billing as Pompano walked off with a 2-1 victory in a tight and exciting battle in front of a crowd of several hundred.

With the spotlight on, Cardinal Gibbons and Pompano embraced the opportunity to use the game as a way to pay tribute and celebrate life, particularly the life of fallen hero, Douglas Athletic Director Chris Hixon.

Hixon was one of the 17 victims of the Douglas shooting. Friday night provided an opportunity to celebrate Hixon’s life and offer support to his family and loved ones. All proceeds from the game will be donated to the Chris Hixon Athletic Scholarship Foundation set up on the family’s behalf. Chris’s wife, Debbie, and his son, Corey, attended the game and threw out the ceremonial first pitch.

“Today was not an easy day, and there were a lot of different emotions going on today,” Pompano Beach manager Joe Giummule said. “But we’re not going to get better crowds than we did here tonight.”

Knowing how difficult it is to start something like the scholarship fund Debbie Hixon has enacted, Giummule embraced the spotlight game as a way to help kickstart that effort while everything is fresh on everyone’s minds.

Having worked with Chris Hixon for six years together at South Broward, Giummule appreciated such a chance to help his family and allow them the comfort from the baseball community’s support at the game.

Following a moment of silence in tribute to the 17 victims at Douglas, and the National Anthem, the rest of the night belonged to intense and passionate baseball. With both clubs rolling out an ace on the mound for their district opener, runs were at a premium and every play left an impact. By game’s end it had the intensity of playoff action. 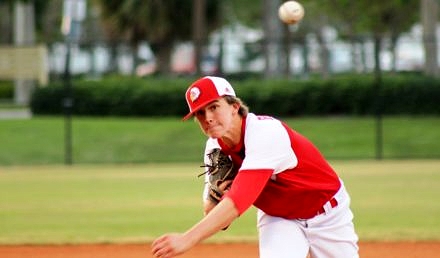 Cardinal Gibbons sophomore Timmy Manning struck out 12 and took a no-hitter into the sixth inning.

Cardinal Gibbons sophomore Timmy Manning was perfect the first time through the order, and he carried a no-hitter into the final inning of play. The southpaw piled up 12 strikeouts while allowing one earned run on two hits, two walks and one hit batsman. On the biggest stage the young ace delivered huge for his club and for the huge throng of fans that attended in support.

“It’s special and baseball is a good fraternity around town between the coaches, and to have the fans here rooting for it and the boys putting on a good show was really a perfect night,” said Chiefs Manager Jason Hamilton. “It was an anticipated game and we’ve been playing some close ball games and some real good ball games going head-to-head with these guys for the last couple years now. It is just a good high school baseball game to be a part of. The communities did good, the fans cheered the right way, and it was a real good night for everybody tonight.”

To counter Manning’s effort, Pompano (4-1) handed the ball to senior ace Trevor Kniskern, who was also locked in right away. Although the Chiefs (4-1) managed a few base hits the first time through the order, Kniskern responded to pick off two runners and strand another. The right-hander went five full innings while allowing three hits and three walks and recording nine strikeouts.

Mike Schuler helped make the most out of Pompano’s first opportunity, after he ended Manning’s perfect outing by being hit by a pitch leading off the bottom of the fourth. Christopher Ajello advanced him into scoring position with a sacrifice bunt and Schuler then stole third and came home off a throwing error on the play. 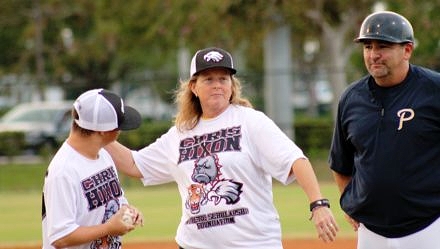 Debbie Hixon follows up son Corey and throws out a ceremonial first pitch.

That lone run nearly held up the rest of the way.

After watching their young ace throw what has become the norm outing in his sophomore season, the Chiefs rallied to get on the scoreboard and even things up in the top of the seventh. Trevor Kole got things going with a single to right field that brought up Kyle Kuramoto. After battling through a 12-pitch at bat that taxed the starter’s pitch count in the fifth, Kuramoto was tough again with two strikes and was rewarded for putting the ball in play when he reached on an infield error.

Their greatest scoring chance having finally arrived, the Chiefs continued to deliver quality at bats. Mike Sarakinis sent a grounder to the right side that advanced both runners as the first baseman made the unassisted out at first. Ty Crittenberger was then intentionally walked to load the bases for the potential of a force-out to any base, but Joe Cerquozzi made it a moot point by lining an RBI single through the defense to plate Kole and keep Gibbons’ hope alive.

Yet all that time, Jake Nord was watching and taking note.

“I was thinking about it all day. The second they came back I was thinking about it,” Nord admitted. “I knew when I was coming up and I knew there was a good chance that I would be coming up with a chance to win this game. From that moment on I was looking forward to it, and I couldn’t wait. It felt amazing to finally barrel one up and actually hit it. It’s definitely a big win for us and the way to start the year off and make a statement.”

The Pompano offense did it’s part to give Nord the chance he envisioned. Ajello walked and Chase Costello was hit by a pitch, and Matt McCrory broke up the no-hitter with a shot deep into the hole to leave the shortstop with no play to make. With the bases loaded Nord had the moment right where he imagined it, and he came through with a liner deep into the left-center field gap to send his team off as the winners. 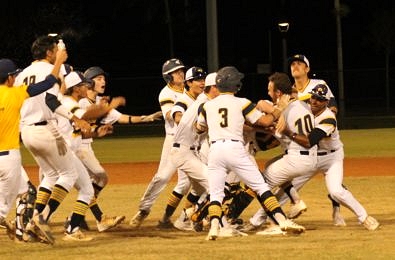 The Tornadoes celebrate the victory.

“I’m happy, but I’m concerned. We were no-hit for six innings with a sophomore on the mound and they out-played us. That is the concerning part, but the other part is we found a way to win and that is what great teams do,” Coach Giummule said. “It was a grinding out game and Trevor pitched great. I want to give kudos to their coaching staff, because they called a great game and they had better approaches than us. Timmy Manning was phenomenal, so kudos to him tonight.”

Proceeds from the Chris Hixon Scholarship Foundation will go to provide a scholarship at each of the three schools that Hixon served as athletic director: Ely, South Broward and Douglas.