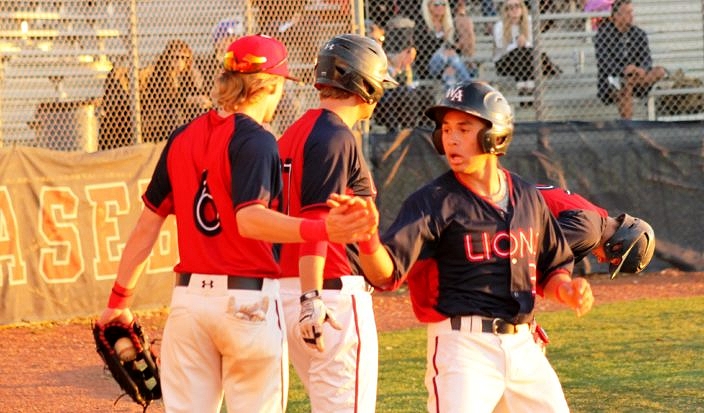 The Lions celebrate during a five-run first inning that put them in the driver’s seat to victory.

Chris Brucks is exactly what the Westminster Academy Lions need in their rotation. The senior right-hander has been slowly working his way back from a virus that slowed him tremendously prior to the start of the season, and the Lions are grateful to have him available again for a pitching staff that has had its struggles this year.

Brucks tossed an impressive performance in his second outing of the year, holding West Orange scoreless for seven full innings to earn a 9-0 complete-game shutout. He scattered two hits and three walks and struck out six.

“It was a big win, a big pickup for this team,” Brucks said. “It’s just having confidence in the guys behind me and throwing whatever I had to throw and trusting all my stuff. When something is missing you just have to go to your B Plan, and I just wanted to locate against a good team like them and give them nothing to hit all night by just staying low and not letting them barrel any balls up. I was just going to the second backup plan and just locating and trusting my stuff. It feels great and it’s a great pick-up for myself. I’ve got this swing of momentum and I’m just going to keep going with it.”

The Lions (7-5) have had their share of games playing in high-scoring shootouts, something that has only further taxed a depleted pitching staff. Getting guys healthy is part of the plan heading into the second half of the season, and Brucks is showing signs he is ready to take on a heavier workload. After being so sick that he lost weight and strength, Brucks has returned well enough to earn his manager’s first career victory over the Warriors.

“He’s just coming off his second start, and he had another great start for us on Saturday in Orlando and beat a really good Osceola team,” James said of Brucks. “It showed tonight. He’s the kind of guy that keeps the baseball down, he changes speeds well and he’s smart out there and he’s calm. He was able to go the distance tonight, so we’re thrilled to have a guy like that healthy and ready to go.” 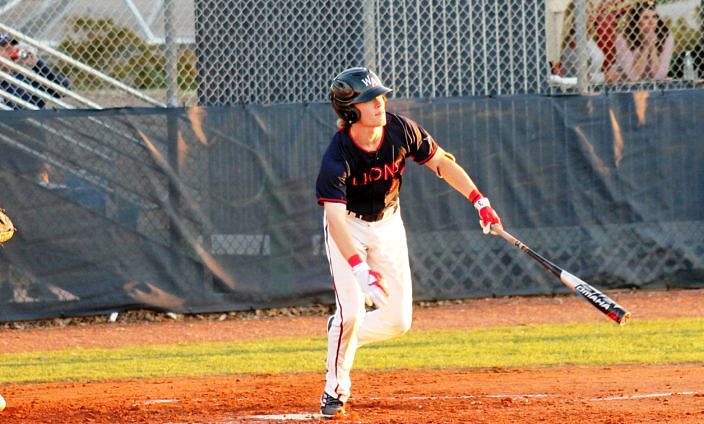 Logan O’Neil connects for a sac-fly RBI during the first inning for the Lions.

One thing the Lions have not struggled at is hitting, and the club exploded right out of the chute to keep that trend going with five runs in the bottom of the first. Westminster put runners on base in every frame, every starter reached base and the batters seemed to find their best swings with runners in scoring position in key moments.

Westminster batted around the order and sent 11 hitters to the plate to go ahead 5-0 in the first. Alec Villanueva walked and Felix Torres and Christian Sosa both followed with infield singles that loaded the bases, and Logan O’Neil drove in the first run of the day with a sac-fly RBI on a flyout to right. Dylan Cappadonna then executed a suicide-squeeze bunt with a great bunt that died on the infield grass to leave the defense with no play, bringing in another run while putting runners on the corners.

“The offense has carried us all year long and they’ve done a great job,” James said. “We’ve got a lot of great senior leadership this year; we’ve got nine veterans. These guys go about it the right way every day in batting practice and work on their craft. It’s important to them.”

The Lions kept things going to turn the snowball into a boulder too large to overcome. Ben Kalbaugh was hit by a pitch that filled up the bags again and Devin Roche was also hit by a pitch to drive in another run. Freshman Brandon Delapenha then delivered a back-breaker with a liner into right field that plated two more.

After connecting for four hits in the first, the Lions were patient in the second. They scored two more runs when Roche was again hit by a pitch with the bases loaded and Delapenha had an RBI walk. Delapenha finished up his nice night with an RBI single to center to drive in Roche again in the fourth, after Roche led off with a double to left. Sosa then split the left-center gap for an RBI double that allowed Delapenha to easily come in for the final run of the night.